Lighting the way to Jewish unity: A Declaration of Interdependence

Our Common Destiny project looks to ‘illuminate’ ties between Israelis and diaspora Jews. 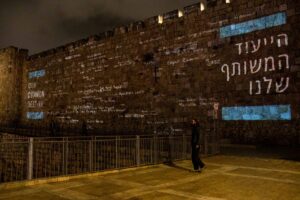 Israel has a Declaration of Independence, penned in 1948 by founding father David Ben-Gurion. But there has never been a foundational document binding Israelis and diaspora Jews and celebrating those deep but fraying ties. Until now, that is. A kind of Declaration of Interdependence – forged by scholars and thousands of Jews around the world – the Our Common Destiny document was feted at the close of 2020 during a gala event in Jerusalem meant to spread the word about continuing efforts to strengthen and unify the Jewish people.

Our Common Destiny is a joint venture between the Israeli Ministry of Diaspora Affairs and the Genesis Philanthropy Group, under the auspices of the Office of Israel’s President, currently occupied by Reuven Rivlin. Over more than a year, project members worked on a declaration of principles, with input from scholars, as well as thousands of Jews around the world through an online survey. During Hanukkah, the final document – called the Declaration of Our Common Destiny – was presented to Rivlin at the president’s house in Jerusalem.

The presentation at the President’s Residence was part of an event called “Illuminate,” emceed by Israeli actress Shira Haas with a light show on the walls of the Old City, and a duet between Israeli world music star international stars Idan Raichel and British singer-songwriter the UK’s Jess Glynne. In a sign of the COVIDovid-19 era, there was limited in-person attendance, and Glynne participated virtually. People from around the world could tune in online to share photos and messages, according to Genesis CEO Marina Yudborovsky.

“Illuminate” was “kind of a light in the midst of a fairly dark time,” Yudborovsky said, “an opportunity to celebrate something very positive – the Jewish community coming together to find common ground.”

Going forward, said Our Common Destiny CEO Sandy Cardin, “we’ll continue to spread the word about the declaration – a very, very important foundational document with a very important message – to as many people as possible.”

Cardin called the declaration “a potential road map for the Jewish future” and said that Rivlin was “very happy to see the completed document.” He added that the declaration has been signed by multiple organizations and individuals, including Israeli Prime Minister Benjamin Netanyahu.

Cardin said that the project will look for “additional ways to engage people, help them converse about important issues in Jewish life,” as well as “other avenues to unify and strengthen the Jewish people.”

“I think that what’s unique here,” Yudborovsky said, “is really broad engagement and a platform we hope helps us come up with really unique solutions and unique opportunities to make a difference on the subject. We’re open to partnering with anyone working in this space.”

Our Common Destiny originated out of concerns over growing divisions in the Jewish world, including with regard to Israel, Cardin said: “The genesis of the project was to answer the question, what can we do to make sure the Jewish people stay united and strong globally and not allow internal dissension and divisions to tear us apart.”

“We’re looking at an old problem through a modern lens, leveraging tools we have today,” Yudborovsky said. “We’re talking about the same problems, but our perspectives are changing. Now we have a State of Israel. The situation with anti-Semitism around the world is different – in some senses better, in some senses worse. It depends on what time period you compare it to.”

A team of 30 scholars worked on the declaration, while the online, crowdsourced survey invited Jews worldwide to share their perspectives and vote for items to be included in the declaration.

Yudborovsky said that “[we] tried to make sure [the scholars] were as representative and as diverse a group as possible,” and that the survey “engaged a large number of Jews across the world.”

There were versions of the survey in English, Hebrew, Russian, Spanish, French, and German. Over 100 organizations helped promote it, and more than over 130,000 individuals have completed it to date.

“The entire declaration of Our Common Destiny is kind of a collaborative work,” Yudborovsky said.

Ultimately, the declaration embraced five principles: The safety and security of every Jew and the State of Israel; Jews’ mutual responsibility toward one another; a strengthened Jewish identity by living through Jewish values; the call for the Jewish people to serve as a light unto the nations; and Jews helping the world through tangible contributions to society in fields such as agriculture and technology.

“It’s a document that we thought the vast majority of the Jewish people can agree with,” Cardin said.

The project faced several challenges along the way, including the death of its initial leader, Ilia Salita, in June 2020. He was 52 and was serving as CEO of Genesis at the time.

Salita was “really the person who had been spearheading [Our Common Destiny],” Cardin said, adding that he died “way, way too early. He was a dear friend as well as a colleague. We miss him very much.”

“I was honored when he asked me to be CEO of the project,” said Cardin, whose previous position was president of the Schusterman Foundation. “I liked the global nature of it, engaging all Jews throughout the world.”

As Cardin worked to continue the project, he faced the continuously evolving challenge of COVID-19.

“COVID really threw us for a loop,” Cardin said, “because we had originally thought a lot of [the project] would be showing the document, engaging people, in a face-to-face way, with meetings and conferences. Because of COVID, this was impossible.”

“A complete pivot started in March and April,” he said. “We had great people working with us … [We] made that pivot without missing a beat.”

During this time, there has been a greater focus on virtual ways to spread the word about Our Common Destiny, while Genesis has added a COVIDovid-19 emergency relief platform to its services.

In this new era, Yudborovsky said that Our Common Destiny is “at a really interesting moment as we sort of map out next steps.”

“It has, at its goal, a kind of base,” she said, “to highlight the kind of common ground we share as Jews around the world.” She noted, “It’s much better if you start with what you have in common than what you don’t share. It’s much more productive, the kind of springboard we hope it will be.”