JIMENA conference urges teachers to include Sephardic heritage in the classroom

The virtual conference was geared toward day school and Hebrew school teachers and school administrators throughout the Jewish community. 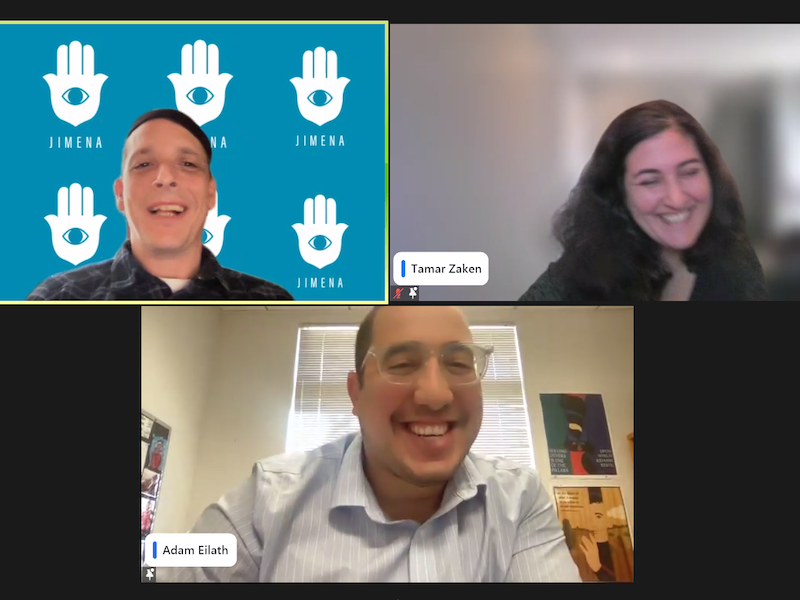 Ty Alhadeff, director of the Sephardic Leadership Institute at JIMENA; Adam Eilath, head of school at Wornick Jewish Day School; and Tamar Zaken, educator and outreach director at Jewish Family and Children's Services presenting at the Sephardic Pedagogy session at JIMENA's Journey to the Mizrah 2.0 conference.

As a child attending Hebrew school during the mid-’80s, Sarah Levin recalls “never, ever learning about half of my heritage,” she told eJewishPhilanthropy. “I remember quite clearly: I was really young, maybe like 6 years old, and learning about Purim, and Purim somehow felt viscerally connected to my Sephardic identity. And that was the only lesson that connected me to my Middle Eastern or my Sephardic heritage.”

Today, Levin is executive director of JIMENA: Jews Indigenous to the Middle East and North Africa, a Sephardic and Mizrahi organization that held its second educational conference on Wednesday and Thursday, titled “Journey to the Mizrah,” Hebrew for east, and a reference to Mizrahim, a term for Jews with roots in the Middle East.  The virtual conference was geared toward day school and Hebrew school teachers and school administrators throughout the Jewish community, and aimed to help “support educators and school administrators as they work to integrate Sephardic studies into their classrooms and learning spaces,” Levin said. More than 150 people attended, with more live streaming on Facebook. Participants joined from Canada, Israel, Colombia, the U.K., Spain, Tunisia, Brazil, France, Chile and cities throughout the U.S.

Levin hopes the gathering “helps increase the capacities of schools to better serve Sephardic students and families,” she said, because many educators “don’t have the content. They don’t have the language, and they don’t have the knowledge to feel comfortable teaching anything related to Sephardic heritage.”

Along with the five Zoom sessions, the conference offered an online curriculum with 12 sessions that can be adapted for students ranging from kindergarten to college. Using PowerPoints, poetry and videos, the lesson plans explore Sephardic and Mizrahi life, and prompt students to delve into their own family history.

The curriculum was launched at JIMENA’s first such conference, an in-person event held in San Francisco in 2019, attended by 50 educators, mostly Ashkenazi, representing 35 schools and organizations. Since then, according to JIMENA, which has an annual budget of $750,000, the lesson plans have been downloaded and used by over 500 educators in seven countries.

Feedback from the first conference showed that “some of [those] who we consider to be great Jewish educators said they don’t feel comfortable even defining [Sephardim], let alone teaching on these subjects,” Levin said. The conference and curriculum were created to “provide materials and resources and information and access to help fill those gaps.”

Many of the speakers at the event also “didn’t feel part of the Jewish story that they were being taught [in Hebrew schools and day schools],” said Levin. “And I think there was a resentment that builds, and there was a feeling of disconnect and dissonance. There are a lot of Sephardic educators who felt incredible dissonance going through Jewish education systems in the ‘90s and early 2000s because of the experience of never having their heritage taught to them.”

Sephardic education should be woven throughout mainstream Jewish education, Rabbi Daniel Bouskila, a presenter at the conference, member of JIMENA’s advisory board and the director of the Sephardic Educational Center in Los Angeles and Jerusalem, told eJP.

“It shouldn’t simply be Sephardic week or Sephardic month, but it should become part of the way Judaism is taught, to all Jews,” he said.

Bouskila’s session at this year’s conference was titled “Classical Sephardic Judaism and the Sephardic Roots of Zionism,” and showcased historical thinkers including Egyptian-born Israeli author Jacqueline Shohet Kahanoff; Rabbi Chaim-David Halevi, the Sephardic chief rabbi of Tel Aviv from 1973 to 1998; and Rabbi Ben-Zion Hai Ouziel, the Sephardic chief rabbi in Mandatory Palestine and Israel from 1939 to 1953, who Bouskila claimed was “without a doubt one of the greatest rabbinic minds of the 20th century… who believed in blending Ashkenazi and Sephardic Jewry together now that we had come back to the Land of Israel, [to] try to remove these ethnic distinctions that were born in the Diaspora.”

“There is a larger narrative to the Jewish experience, into Jewish thinking, than what’s typically taught in many Jewish schools, which is Judaism from a Eurocentric perspective,” Bouskila said, adding that Sephardic culture is often reduced to being about just food and music, rather than philosophy or intellectual pursuits.

The conference also included sessions about the different approaches to defining Sephardim and Mizrahim and how those terms have evolved over time. Other sessions covered the ways different educators are speaking about Israel in progressive settings; how to elevate a diversity of Sephardic voices instead of tokenizing;  Sephardic studies in Israeli public education; and the importance of educators doing their best to help every student connect to Judaism, recognizing that students often connect differently.

“Right now, there’s growing awareness and recognition of the fact that our students deserve and need our Jewish educational system to change to meet their needs,” Levin said. “Jewish student bodies are becoming more diverse. Jewish educators are aware of this. And right now, there’s a willingness and thirst to gain the content and the training to be able to teach this professionally and effectively and impactfully.”

After the 2020 conference, Levin visited a fifth-grade classroom in a San Francisco Jewish day school to see the Journey to the Mizrah curriculum in action. The  teacher prompted the students to explore their family history and discuss the traditions passed down through the generations.

“It was really special to see these little kids, who are [of] Sephardic heritage, step forward and name it proudly,” Levin said. “That didn’t always happen.”