Jewish teen advocacy: What is it and how does it lead to the new American Jew?

For the past 20 years, Jewish education was hyper-focused on teaching tzedakah and tikkun olam. The rare attempts to educate and prepare students for campus were made through a one-time workshop or speaker. Why then, are we surprised when Jewish kids start or join anti-Israel groups?

What can we do to prepare our children to defend themselves and stand proud in the face of the vicious Jew-hatred and anti-Zionism that is infiltrating every aspect of Jewish life? We need to create a network of educated, confident teens who embrace their Jewish identity and are willing to advocate for themselves, Israel and the Jewish people. We need to create the New American Jew.

For the past 20 years, Jewish education was hyper-focused on teaching tzedakah and tikkun olam. The rare attempts to educate and prepare students for campus were made through a one-time workshop or speaker. Why then, are we surprised when Jewish kids start or join anti-Israel groups? 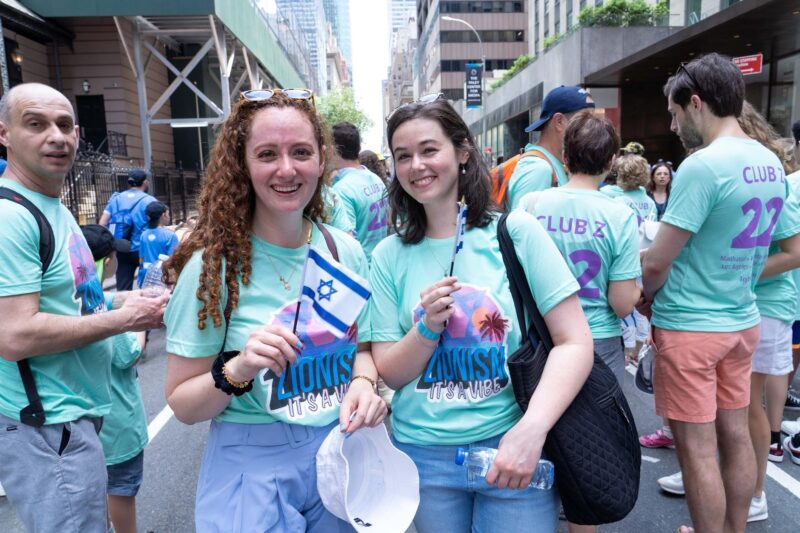 Would you allow your child to sit for an AP calculus exam without taking the course? Would you allow them to perform in a school play without attending any rehearsals? Of course not. We want our kids to succeed, and it is our responsibility to ensure that they are set up to do just that.

If that is the case, why are Jewish parents sending their children off to hostile environments – U.S. colleges and universities – without any preparation? Without giving them the knowledge and confidence to withstand the onslaught of antisemitism they will encounter?

I founded Club Z more than 10 years ago because I believe Jewish teens in America deserve to be prepared for and acknowledge the challenges that they will ultimately face. When I first started, I thought that if we just educate our kids and give them the facts, knowledge and understanding of the conflict, they’ll “see the light,” and they will choose the side of actual, fact-based truth.

Ten years later, I can tell you unequivocally that knowledge is not enough. The Jewish people can no longer afford knowledge for knowledge’s sake. The doing part is the missing part for many teens. We need advocates. Actually, we need an entire generation of Jewish advocates.

But advocacy is not merely standing on a corner waving an Israeli flag. That’s wonderful, and I applaud every time I see Jews do that. However, for teens to effectively attend a rally, speak out in class, or write an op-ed advocating for Israel and Zionism, they need to be able to first advocate for themselves.

In order to instill in teens a strong Jewish identity, it is critical that they receive an in-depth education on Jewish and Israel history and peoplehood. This education must begin in high school – before teens get to college – when identity development takes place. Teens must know where they come from and embrace the pride and beauty of thousands of years of Jewish history. They need to understand that their heritage is inexorably tied to Israel and Zionism. When an attack in Israel takes place, American Jews shouldn’t think of it as happening to other people in a faraway land; rather, it is happening to their people, their homeland, their family.

This mindset will bring about the “New American Jew” – young Jews with strong identities who are not afraid to “get their hands dirty” in the work of advocacy. In the early 20th century, Jews who left the intellectual elite to work the land – literally get their hands dirty – were regarded as inferior. But look at the profound impact the New Jews had! They transformed the land of Israel into a thriving economic powerhouse.

We are seeing a similar trend today. In established Jewish organizations, advocacy is often eschewed, perhaps because it is viewed as too politically charged. More than that, advocacy is being looked down upon. At a recent meeting with a Jewish community organization, I was told, “We believe in Israel and Zionist education, but we draw the line at advocacy.”

That must change. For the sake of our Jewish future.

Young Jews today must be unafraid to “get their hands dirty” in the hard work of Jewish advocacy and be strong and proactive about their support for Israel and the Jewish people. Because at the end of the day, the people they are defending are themselves. It’s no longer a controversial idea that anti-Zionism is antisemitism. The struggle that our children are facing has very little to do with Israel and everything to do with the fact that they are openly Jewish. I’ve seen the transformation that results in this kind of teen empowerment.

How do we empower teens to become effective advocates? To become New American Jews? There are three essential components that give teens the strength to confront the anti-Israel sentiments they will undoubtedly face on college campuses and beyond: knowledge, confidence and community.

The knowledge must consist of an intensive program built on three pillars, Zionism, peoplehood and advocacy, and include multiple in-depth sessions on Jewish and Israel history, the Arab-Israeli conflict, understanding narrative, identifying bias, case studies, maps and language. This education is complex, nuanced and needs to adjust to the pressing issues of the time. We need to give teens comprehensive knowledge, rather than talking points, and teach them how to think critically and analytically, so they reach their own conclusions about the issues discussed.

The teens’ confidence comes from linking that content to experiential identity development and advocacy training. Once teens have the knowledge and are secure in their Jewish identity, all they need is practice, which fosters confidence. Teens should receive debate and public speaking training and real-life opportunities to put them into practice. They need guidance on how to defend their positions under pressure with calm, thoughtful responses grounded in facts.

Finally, but perhaps most importantly, is community. Teens can have a firm grasp on the facts and history and be confident in their identity and ability to defend their position, but if they don’t have a community of like-minded peers who support them, it is all for naught. Social events, retreats, Shabbatot, go-karting, laser tag – I could go on and on – are critical to building deep friendships with teens from different backgrounds and creating a powerful community dedicated to common goals.

Club Z teens are educated, confident, unapologetic Zionists. And here is what I’ve learned after 11 years of working with them: Once you learn the history of the Jews and Israel and understand who you are and your place in the Jewish story, you wake up and are excited to share these ideas with those around you. What’s more, you will put every fiber of your being into defending your identity and your homeland.

Our teen advocates are the Jewish leaders of today and tomorrow. They are the New American Jews.

Masha Merkulova is the founder of Club Z.