Jewish groups in LA are uniting to support the Iran protests

Historically, many Iranian Jews have been sensitive when it comes to public advocacy regarding Iran, careful not to endanger the Jewish community still in the country. 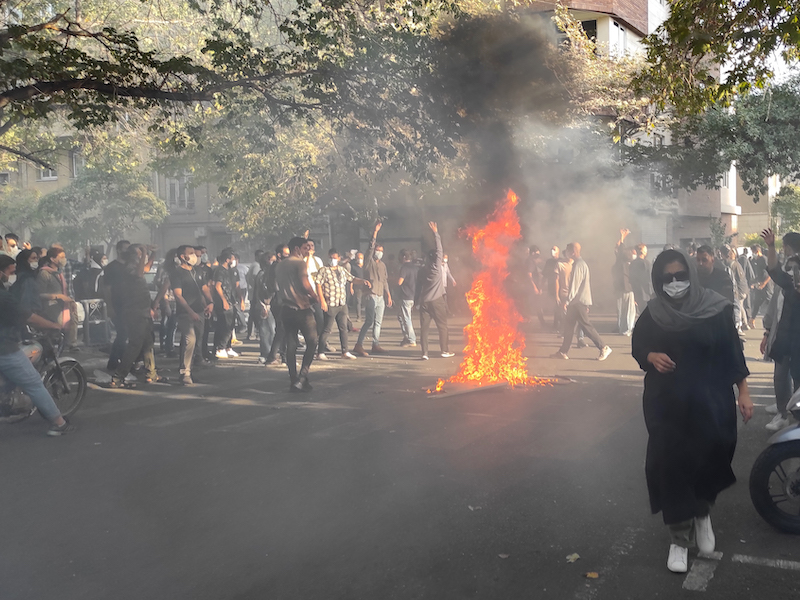 A protest for women's rights in Iran in October.

Los Angeles is a hub of Jewish and non-Jewish Iranian life, so when widespread protests for women’s rights erupted against the Islamic Republic’s theocratic government in September, Rabbi Tarlan Rabizadeh wasn’t surprised to see local Iranians come together to support the demonstrators.

Now, Jewish groups in L.A. are collaborating to plan a community-wide show of support for the protests.

“I think this is the first time in history, or maybe during my time on earth, that the Iranian Federation, the Jewish Federation, Chaya, JIMENA, so many different organizations have come together to do something for Iran in the L.A. greater area,” Rabizadeh, vice president for Jewish engagement at American Jewish University, told eJewishPhilanthropy, naming a constellation of local Iranian and Jewish groups.

Though the event doesn’t have a set date or a title yet, representatives from the organizations have been flirting with calling it “From Tehrangeles to Iran,” using a common nickname referencing the high percentage of Iranian Angelenos.

The WhatsApp group used for the event planning is named “Zan, Zendegi, Azadi,” the slogan affiliated with the movement, which means “Women, Life, Freedom.” The Iranian protest movement was ignited after 22-year-old Mahsa Amini died in a hospital under suspicious circumstances after being arrested by Iran’s morality police for improperly wearing her hijab.

“There’s this thing in Los Angeles brewing that we know it’s a perfect time for all of us to collaboratively do something and stand as a unified Jewish Iranian community,” Matthew Nouriel, program coordinator for JIMENA and the social media activist known as The Empress Mizrahi, told eJP.

Historically, many Iranian Jews have been sensitive when it comes to public advocacy regarding Iran, careful not to endanger the Jewish community still in the country, which vilifies Zionism and funds terrorism against Israel while claiming it doesn’t have an issue with its Jews.

Before the 1979 Islamic Revolution, Iran’s Jewish population numbered more than 100,000, but most left for Israel and America after the country became a theocracy. The current number of Jews in Iran is estimated to be between 9,000 and 20,000. Recent events are drawing up past trauma for many Iranian Jews and their families, said Rabizadeh.

The Jewish community living in Iran has been “impacted by years and years of needing to be silent and navigate the system there to survive,” Mary Kohav, the Los Angeles Jewish federation’s vice president for justice, equity, diversity and inclusion, and community engagement, told eJP. For the first time in recent history, Jewish community leaders in Tehran asked congregants to not visit synagogues during the High Holiday season in order to not connect the synagogues to the protests surrounding them.

“Jewish politics pretty much reflected the rest of politics before the revolution,” Lior Sternfeld, a history and Jewish studies professor at Penn State, and author of Between Iran and Zion: Jewish Histories of Twentieth-Century Iran, told eJP. In every social movement since, including the 2009 protests that were triggered by accusations of rigged elections, “some [Jews] took to the streets. Some of them did not, and never as [a] community, always as individuals.”

But some Iranian Jews in America have less compunction about speaking out. This movement “is about human rights. This is not just political,” said Elham Yaghoubian, author, activist and the executive vice president of the Iranian American Jewish Federation (IAJF) of Los Angeles. “I’m not representative of Iranian Jewish community in Iran. I am Iranian and I happen to be Jewish, and I don’t want to be quiet.”

The overall Jewish community needs to act because the protestors need support, said Rabizadeh. Iranians are being jailed for taking off their hijabs, imprisoned for reporting the news, murdered for attending protests. Protestors are “telling us we would rather die than stay alive but not live a full life,” she said. When people show solidarity, she believes it pushes the protests forward and inspires them to grow stronger.

Rabizadeh leapt into action after feeling there was a lack of American rabbis weighing in on the situation. “It was maybe 30 days into the protests and I had one rabbi call me and say, ‘Hey, Tarlan, I want to talk about it. How should I do it?’ And it was really upsetting. On one hand, I want to be very grateful [that they reached out] and [on] the other end I was just flabbergasted by the fact that no one even knows how to enter the conversation.”

She wondered, “how do we educate them because their question is, ‘if we’re Jewish, why the heck should we care about Iran?’” she said. To her, it’s simple: She feels a stable Middle East would benefit Israel, and feels the need to speak out because of the current and historical Iranian Jewish population, and especially because all Iranians deserve human rights.

“When students get surrounded by a bunch of armed people and they want to kill them for having posted something against their government, and they just kill them systematically, does that not remind us of anything Jewish that happened?”  Rabizadeh asked. “When people are being raped in the name of religion because you can’t kill a virgin, is that not something to cry out about? Are we supposed to only care about Jews? Is that what the world has come to?”

She hopes the upcoming Los Angeles event she is helping plan inspires rabbis to reach out to Iranian activists for help creating programming for their own synagogues.

The community-wide event is expected to feature speakers from both the Jewish and non-Jewish Iranian community. There will be a call to action for the community, but what it will be hasn’t been determined.

“Jewish organizations outside of Iran are in a tough spot, with not much they can actually do to help financially,” said Sternfeld. U.S. sanctions prevent aid from reaching Iran, and, Sternfeld added, “Any [financial] support for Iranian civil society organizations would look like foreign interference, as opposition, and this is a sure way to discredit the movement.”

Some representatives for the event hope to call on politicians to stand with the people of Iran. Some called for amplifying and sharing Iranian voices on social media. Some hope to simply show solidarity.

Aside from the community-wide event, many of the L.A.-based organizations are creating their own  programming, making sure Iranian Jewish activists are leading the way. On Dec. 15, Rabizadeh is holding an event at the American Jewish University with Iranian-American journalist and women’s rights activist Masih Alinejad. Nouriel is taking the lead on a virtual event for JIMENA in the near future, though specifics haven’t been settled on.

Nouriel hopes the event will not just inform and inspire non-Iranians, but also inspire Iranian Jews in the United States, because many have lost hope. “When I asked my dad about what’s going on, he immediately said don’t get involved, put your head down, and then he said that country is a lost cause,” they said. “I don’t think there’s a lot of faith amongst a lot of Jewish Iranians. However, that was a good month ago. I think things are starting to change. I think people are starting to see that there is a possibility that things will be different.”

For many Iranian Jews, they finally feel that they may one day be able to return home.

“We all say next year in Jerusalem,” said Rabizadeh. “Next year in Iran.”