Israeli and Ukrainian youth meet virtually amid the bombing

The meeting was convened by Israel-is, a group that aims to forge connections between young Israelis and their international peers 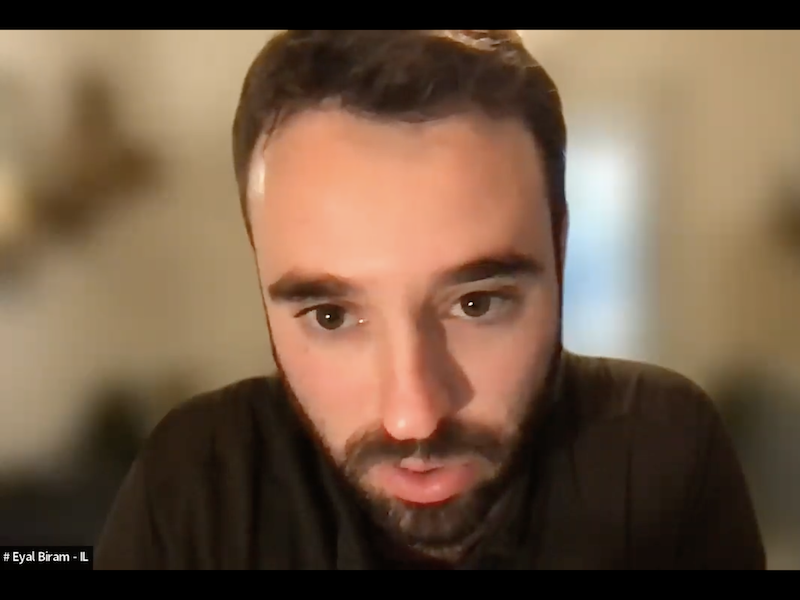 Eyal Biram, CEO of Israel-is, speaks during the meeting.

In the weeks since Russia invaded Ukraine, Israel has endeavored to maintain a delicate position — condemning the attack while demuring from the sanctions other Western nations have imposed, a strategy that has allowed Jerusalem to keep up relations with both the Kremlin and Kyiv.

But Monday saw diplomacy of a different sort between Ukraine and Israel, when dozens of young people from both countries met on Zoom to discuss the war. Israelis expressed solidarity with their Ukrainian peers, who vowed that they were determined to protect their country.

The virtual meeting was convened by Israel-is, a youth organization, and the Ukrainians came from the Ukrainian Leadership Academy. The two organizations have met in the past, most recently when the Ukrainian group visited Israel in 2019 and saw communities that experienced shelling on the Gaza border.

Now, the Ukrainians were the ones being targeted by bombs. They had evacuated to the western part of the country to escape the fighting; still, fearing potential airstrikes, some of them Zoomed in as a group from a bomb shelter.

Israel-is, founded in 2017, aims to train young Israelis to be unofficial ambassadors of their country. In February, it ran a trip to Marrakesh in which Israeli young adults met their Moroccan peers. It has also created partnerships with young people in Bahrain and the United Arab Emirates, two other nations that recently normalized relations with Israel.

In addition to the young people, Natan Sharansky, the prominent former Soviet refusenik, addressed the group.

“For the next 1000 years, Russia will have to deal with this, how to restore their self-respect as a place among the nations,” said Sharansky, the former chair of the Jewish Agency for Israel, who was born in Donetsk, Ukraine. “At this moment, you’re showing what it means when people rediscover their identity, when people feel themselves very deeply connected, passionate, to their history, to the people, to their land…We will pray for you, help you, and if sometimes, we think that our governments don’t help enough, we’ll continue lobbying to make sure that support of your struggle — which is so important for all of us, for all the peoples — will be victorious.”

The Ukrainian Leadership Academy (ULA) is a training program for Ukrainians ages 16 to 20 who take a gap year after high school in which they study, learn, volunteer and travel. Since the invasion began, students have continued to study together, but are also working on the frontline or as volunteers to help the army win the war, program manager Andrij Marušak said.

“These people are meant to be the new elite of Ukraine and the leaders of Ukraine,” said Marušak. “That’s why we are giving them the best education we can and the values that we want them to spread around and to be the changemakers in their society.”

Marušak added ULA students will be among those who lead the country when the war is over.

“This is the war of independence for Ukraine,” he said. “And that’s why we must be very strong…and not think that it will end soon. We are moving [into a] long-term war… . After the war will be finished, we will have to restore the country, rebuild, [and] help people who are in need. That’s why our students have to be there.”

The students also appealed to their Israeli counterparts for support. Petro Budzan, a ULA participant, said, “We need help from the world. And if we will not stop watching, you can be next. We will fight to the end to win our country back. But we need your help.”