Rabbis in Florida are aiding hurricane victims while preparing for Yom Kippur. 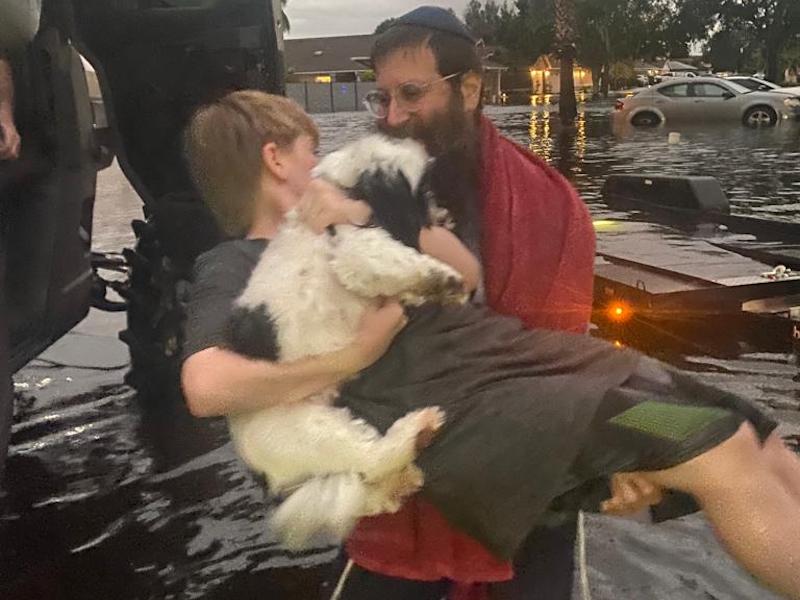 Rabbi Yosef Konikov rescuing a boy and his dog from a flooded house in Kissimmee, south of Orlando.

The day after Hurricane Ian hit his neighborhood in Kissimmee, Fla., just south of Orlando, Rabbi Yosef Konikov found himself atop the back of a stranger’s jeep with a local lifeguard, driving the car through more than five feet of water to rescue a local family stuck in their flooded house.

They managed to bring the parents, two young children and their dog to safety before it got dark.

“It was an incredible kind of divine providence,” Konikov, director of the Chabad of South Orlando, told eJewishPhilanthropy. “We were able to make it through the water, but other cars were totally submerged. So, we would have never made it with the car.”

Originally, Konikov had planned to reach the marooned family by boat, but the sun was setting, and the boat had still not arrived. While he was waiting, Konikov spotted the jeep being delivered on a trailer and asked the trailer’s driver for help.

“The guy actually stopped everything. He lowered the trailer, he took the monster jeep off, and we went straight to the water,” said Konikov. “I was impressed with him. He was a real sport.”

Because they couldn’t fit the whole family into that jeep, they drove to where two other community members were waiting with another jeep. The group transferred some of the family members into the vehicle before returning for the rest.

In total, as of Sunday night, more than 75 people had died in Florida, and another four in North Carolina, as a result of the hurricane. Four days after the storm first made landfall in Southwest Florida, more than 750,000 people were still without power.

The hurricane has put rabbis in an especially difficult position as they protect themselves and their communities in the midst of the High Holidays. Some evacuation orders came on Rosh Hashanah, when some communities were not using phones or electricity. Now, as the region confronts the loss and damage wrought by the storm, Yom Kippur, which begins tomorrow night, is fast approaching.

“The people in those units that were kind of locked in were saying that they’re hoping at the beginning of next week, they’ll be able to get through,” Konikov said regarding people still stuck following the storm. “We’re hoping [the water level] is going to go down… So we will see. Otherwise, we’ll figure it out from there.”

Konikov said that Orlando, an inland city, is usually not affected on this scale, with hurricanes mostly arriving as a Category 1 or a tropical storm. This time, he said, the size of the hurricane caused many of the lakes to overflow, flooding entire low-lying neighborhoods.

In addition to rescuing people stuck in flooded houses, Konikov and his team of volunteers are delivering supplies of food and water to people who are stranded because of flooding on the roads. He is also coordinating with a local volunteer, Ron Benvassat, to bring meals to a man who was hospitalized after being submerged in water while in his car.

For Rabbi Yitzchok Minkowicz, director of Chabad Lubavitch of Southwest Florida in Fort Myers, the storm came too quickly to prepare. After thinking the hurricane would not hit the area, he learned that they had to evacuate by 8 p.m. on Tuesday evening. But Rosh Hashanah was just ending at that hour, and it was too late to get out.

Now, five days later, Minkowicz is still in Fort Myers. And even though he said he’s taking the storm’s aftermath “every second at a time,” he’s committed to observing Yom Kippur with his community — fasting, prayers and all. An hour before he spoke with eJP on Sunday night, his building’s power was restored, and the roads were clearing up.

“We’re going to have full services on Yom Kippur, with a big minyan and a big hazzan,” he said, using the Hebrew word for “cantor.” “We’re going to be fasting very, very heavily, praying, we’ll be saying a lot of Tehillim [Psalms], and we’re going to be thankful to Hashem that we’re alive.”

Other communities had more time to prepare. Rosh Hashanah services at Congregation Mekor Shalom, a Conservative synagogue in Tampa, had fewer attendees than expected because people were getting ready for the hurricane, said Hazzan Jodi Sered-Lever.

“One congregant is an elementary school principal and was on standby to help set up one of the schools that became a shelter,” Sered-Lever said. “She needed to leave services early to report, in the event she was needed, to ready one of the shelters.” The synagogue sheltered one of the congregants who lived close to the coast.

Congregations have been using the days between the two holidays to stay in touch and help those in need. Minkowicz told eJP that being stuck in Fort Myers was “probably a good thing because we have to help people.” He has been using the Chabad building, which is a relatively newer structure on higher elevation, to shelter 50 people, from babies to those in their 90s.

“They got into their car, but there was nowhere to go,” said Minkowicz of a person passing by the Chabad with his elderly grandparents. “So, someone saw him on the street and said, ‘Come in here.’ They said, ‘We’re not Jewish.’ But we said, ‘No, come in,’ and we took them in and sheltered them. And then when everything subsided, they went back home, but who knows if they would have lived if we weren’t here.”

When he first spoke with eJP on Thursday, Minkowicz said the community was dealing with unprecedented damage, the extent of which was still unknown. “A lot of people are unaccounted for and who knows where they are,” he said.

On Sunday, he told eJP that more bodies had recently been found on Fort Myers Beach, though no one from his community, as far as he knew, had been killed.

Right now, his Chabad is serving as a distribution center where people can eat or pick up meals, and as a base for supplies that are being delivered to people stranded in their homes. He’s hoping to raise $180,000 for the effort.

Other congregations have pitched in to help, including synagogues in Boca Raton, on Florida’s east coast, that have donated food for Shabbat, as well as another Chabad that donated generators and other supplies.  In addition, the emergency services organization Hatzalah, has sent in rescue teams from Baltimore and South Florida.

“The idea of people helping people, you see it in times of disaster like this … it’s such a moving thing,” said Minkowicz. “And literally, people contributing from all over the world. So, people really are there for each other in a beautiful way.”

On Thursday night, two nights after Rosh Hashanah, Sered-Lever held “a community checking-in call” over Zoom, which gave congregants a platform to connect and share their experiences. She is still unsure how her community will observe Yom Kippur.

“Whether or not folks are able to participate in the check-in, I encourage everybody to let me know how they are doing,” said Sered-Lever. “I always want people to know that I care about them.”