The most recent Pew study found that while 8% of Jewish adults surveyed identify as something other than white, that number increases to 15% among Jews 18-29

Twenty-one years ago, I was a young mother with an infant son. We had just moved to a new community and we were excited to join the local synagogue. We already knew some people in the congregation and there were other babies my son’s age. So as soon as we moved in, we submitted a membership application.

A few days later, I received a call from the synagogue’s executive director. She very apologetically told me that she couldn’t accept our application to join as a family, but it would be fine if my same sex partner and I joined as two separate individuals. You see, in the year 2000, same sex marriage was not yet legal in Massachusetts (it would become legal 4 years later) and according to the synagogue’s bylaws, the only membership categories were “individual” and “family,” and family was defined as two married adults with or without children. 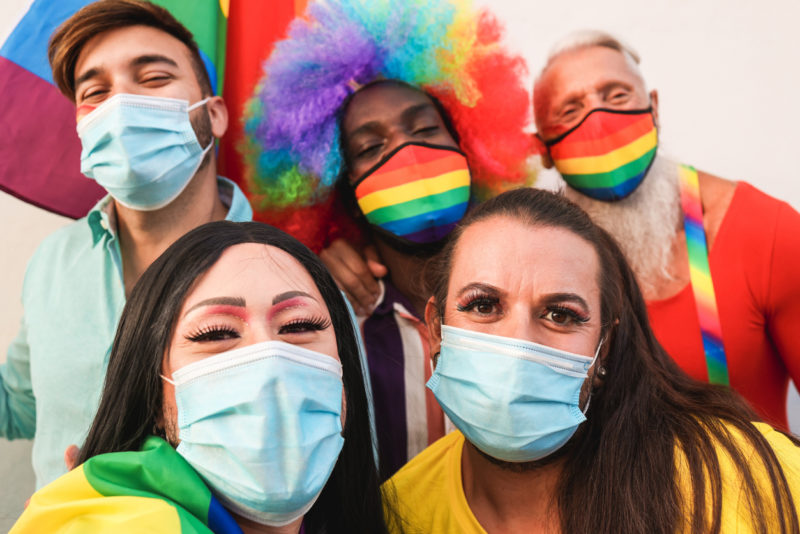 Although we had a wedding ceremony in 1996, our marriage was not legally recognized by the state or the federal government, and therefore, we were not considered eligible for a family membership at the synagogue.

Since we were regular shul-goers and had moved to the community primarily to join the synagogue, we never even considered going someplace else. We waited patiently, all the while continuing to attend services, while the rabbi worked with the lay leadership to educate the community and change the bylaws, which they eventually did.

But what if we hadn’t already had friends in the congregation? What if we were strangers to the community, exploring our options rather than having already decided this would be our synagogue? I imagine most people in that situation would have taken no for an answer and found another spiritual community more welcoming to them.

While many congregations have more inclusive membership policies than they did 21 years ago, a version of this story still plays out in many communities. Even for congregations that have inclusive membership policies, people who are not white, heterosexual, cis-gender, Ashkenazic Jews often feel like outsiders, never fully feeling a sense of belonging.

The most recent Pew study found that while 8% of Jewish adults surveyed identify as something other than white, that number increases to 15% among Jews 18-29. In addition, 17% of American Jews surveyed live in households where at least one person identifies as Black, Hispanic, Asian, another non-white racial identity, or as multi-racial.

Additionally, a recent study commissioned by the Jews of Color Initiative (Beyond the Count: Perspectives and Lived Experiences of Jews of Color), surveyed over 1100 Jews of Color across the United States, and more than half of the respondents were in their 20s and 30s. 64% reported having at least one Jewish parent, 67% were raised Jewish, and when asked about religious identification, 77% identified as exclusively Jewish.

What comes through clearly in both studies is that the next generation of American Jews is more racially diverse than ever before, and there is no doubt that each successive generation will be more diverse than the previous one.

Looking at these numbers, our mandate in the synagogue world is very clear. If synagogues are to remain relevant for our children and grandchildren, who will continue to come from more diverse racial and ethnic backgrounds, we must train our clergy, our lay leaders and our members not just to be welcoming, but to be fully inclusive and to foster a sense of belonging for all Jews and their families, regardless of race, gender identity, sexuality, disability, socioeconomic status or who they’re in a relationship with.

USCJ takes this mandate seriously, and is offering several programs this Fall and Winter focusing on issues of diversity, equity, and inclusion (DEI):

Join Heather Miller, President of Flatbush and Shaare Torah Jewish Center and Eitan Dantzig, Board Member and Co-Facilitator of FJC’s anti-racism work, for a 4-part series on race consciousness. Heather is the creator of The Multitudes, dedicated to making space for embracing those outside of the ‘mainstream’ Jewish image. Series is open to clergy, professional staff, and lay-leaders of USCJ synagogues. Begins 10/20/21. For more information, contact Allison Kapusta at kapusta@uscj.org.

USY is piloting a new opportunity for connection, leadership, and education exclusively for young Jews of Color, Indigenous Jews, Sephardi Jews, and Mizrahi Jews across the country. Together, these groups will develop leadership skills, hear from JOCISM speakers who are making a difference in their communities, and unpack their intersectional identities using Jewish themes and values. Most importantly, they will develop bonds with other JOCISM youth from near and far. For more information, contact Rafi Forbush at forbush@usy.org.

USCJ is proud to partner with Keshet for the USCJ-Keshet Leadership Project. This year-long, cohort-based program equips synagogues with the skills and knowledge to build LGBTQ-affirming communities, create spaces in which LGBTQ Jews feel valued, and take action for LGBTQ rights. The Leadership Project will launch with a two-part online summit on 11/10 and 12/1.  The program is open to USCJ congregations and space is limited. For more information, contact Rabbi Micah Buck-Yael at micah.buck.yael@keshetonline.org

USCJ is excited to partner with Sacred Spaces to provide USCJ congregations with the opportunity to participate in a year-long cohort focused on building and affirming a culture of safety and respect for those who work in, and interact with, synagogues. The cohort will use Keilim, an online policy toolkit, developed by Sacred Spaces with the support of the SRE Network.  For more information, contact Aimee Close at close@uscj.org.

In the very first portion of the Torah, we learn that every individual was created in the image of God. As the network of Conservative synagogues in North America, and a reflection of our commitment to this most important Jewish value, USCJ is more committed than ever to helping our congregations build more inclusive, welcoming, and equitable Jewish communities.  We welcome you to join us.