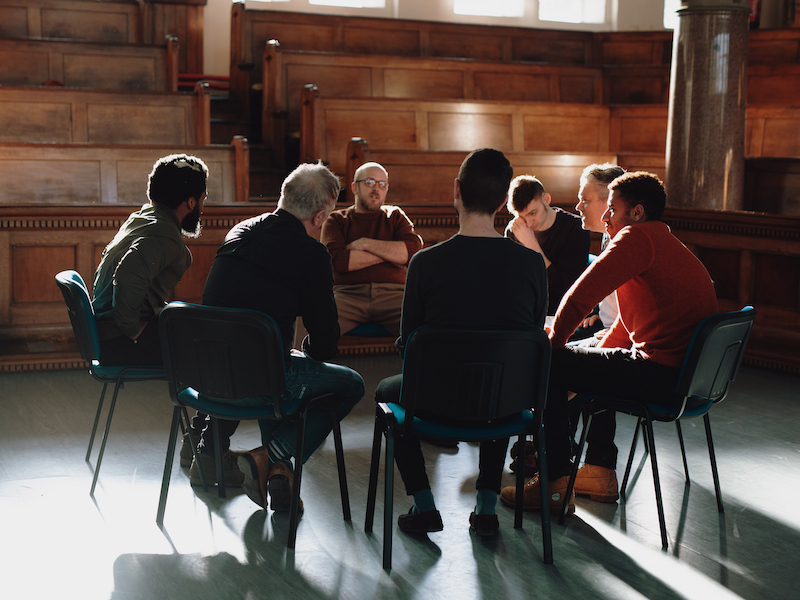 When Rabbi Dovid Hordiner pitched the idea for a fathers’ support and study group to his boss, Aviva Deren, the founding director of Gan Yeladim Early Childhood Center, a Stamford, Conn., Chabad school, she thought it would bomb.

“I wanted to see people who were working for me succeed,” Deren told eJewishPhilanthropy, “and to give them room to make their own decisions and their own mistakes. And my thought about this group to begin with was, ‘What can we do to let Reb Dovid down gently? This thing is going to crash. There’s no way this is going to work.’”

But Hordiner, who also has three master’s degrees in subspecialties of education and child development, pressed on. “I wholeheartedly believe that [these groups are] something that needs to happen,” he told eJP. “I know that I often feel kind of alone sometimes. And I’m sure there are others who feel that way too.”

Even though she was skeptical of its chances of success, Deren gave the dads’ group initiative a thumbs-up, telling eJP that historically, society has viewed dads as “props,” she said, not essential caretakers. But “over the years,” she added, “fathers are more involved than they used to be [in their kids’ lives], no question.” She came up with the name Fathers First for the dads’ group because “we wanted to give the message that who you are as a father comes first in your life. That should be the most important thing.”

For eight years, the fathers’ group that seemed unlikely to last became a small-scale success story for the school, drawing a consistent crowd of dads to a program focused on their experiences that, organizers and others say, is a rarity in Orthodox spaces. But by 2016, Fathers First was gone, and an attempt to recreate it elsewhere fizzled — even though educational professionals told eJP there should be more groups like it.

There is “a dearth of parenting [support] in general, and for fathers in particular,” Tricia Stern, a psychotherapist and the vice president of Child and Adolescent Mental Health for the Network of Jewish Human Service Agencies, told eJP. “Even before COVID — parenting is hard. Raising children is hard. And I just wish [support] was more normalized.”

The Fathers First group fit with the goals of the school, which were to provide quality education to entire families, not just children, said Deren. The school had recently received a grant from The Jewish Early Childhood Education Initiative, a program that aimed to draw families into Jewish early childhood education programs by employing best educational practices and engaging the entire family in Jewish living — including by providing consultants on site. The program — which gave the school roughly $20,000 to $30,000 over two years from a consortium including the Steinhardt Foundation for Jewish Life, the Harold Grinspoon Foundation, and the Samuel Bronfman Foundation — also empowered family members to take on leadership positions in the schools.

By the time Hordiner began working at Gan Yeladim in 2007, he discovered that mothers and children often had supports including classes and support groups that fostered community, but fathers didn’t. He also felt that targeting dads was unique. There was no blueprint. “I didn’t find a lot of people doing these kinds of things at all,” he told eJP.

Fathers First launched in September 2008, with eight to 15 dads initially gathering together four times during the school year at different members’ houses in the evening to discuss parenting and Torah. The initiative cost Gan Yeladim very little; Hordiner was a salaried employee, so all the school needed to pay for was snacks and beverages.

“It was heimish,” Hordiner said, using a Yiddish term connoting hominess, informality and warmth. “People would come into the house and there would be socializing, food, drink, a little bit of hanging out.” His goals for the program were to create “a place where fathers can get together, get to know each other, be part of a community, build friendships.” The makeup of the group crossed denominations; some participants were Orthodox, others were not.

“It was a very unusual thing to have a man in a prominent role in children’s education,” Deren said. Since Hordiner had grown up non-observant and was also trying to be thoughtful about his parenting, she felt his personal example demonstrated “lifelong learning as a way of life and growing.”

Topics discussed at gatherings ranged from “Effective Discipline: Parenting with Love and Values” to “Fathering in Tough Economic Times” or “Breakfast, Dinner, and Shabbat: The Role of Mealtime When Raising a Family.” The sessions also covered marriage and childcare, and therapists were frequent guest speakers. Members sat in a circle and “either share[d] something that worked for them,” Hordiner said, “or they would share a struggle or a challenge and then the group would respond to each other… It was a safe space for many. Fathers really did make themselves vulnerable.”

Marc Nerenberg, a group member who joined in 2015 when his kids were ages 1 and 3, at first found it “weird to talk about being a dad,” he told eJP, but soon he was opening up to the group: seeking advice, discussing bedtime concerns and how to get out of his own head so he could focus on his kids’ needs. On TV, he said, he was used to seeing fathers portrayed as useless dolts, chugging beer all day in recliners while mothers coddled them and the babies. He felt Fathers First represented men pushing against the trope of inept fathers.

The connections participants made during the group’s meetings spread through the community. Soon, they were meeting weekly with Hordiner for a Torah study group. Deren remembers a Simchat Torah celebration where the group was pressed up against the bimah, dancing and singing together, as their kids slept in the pews.

“Many synagogues have a challenge around preschool, early childhood programs, where the parents of these programs don’t necessarily come to synagogue events,” said Rabbi Levi Mendelow, the director of Adult Education at Chabad of New Canaan, Conn., who worked closely with Hordiner. “Sometimes these communities can become quite compartmentalized. This Fathers First group had this effect of creating synchronicity between the various different elements of a larger organization.”

Deren said that she was “blown away by the response that he got… There are not that many opportunities, especially for a guy who doesn’t like football, for men to come together in a meaningful way as men as fathers.”

But in 2016, Hordiner left the community for a new position at the Tzohar Seminary, a gap-year program for young women to study art and Torah in Pittsburgh, and the group shuttered. He hoped to start the group in his new home, so in mid-May 2016, he sent a proposal for a similar group to the Jewish Federation of Greater Pittsburgh.

Instead of going through the official funding portal, he contacted an employee he knew directly, proposing three Fathers First groups serving different local communities with an overall budget of $14,720, covering his work, travel, marketing and a website. Many follow-ups later, in mid-August, he received a reply:

“As truly excited as I am about the possibility of launching a fathers initiative,” the federation employee wrote, “I have not quite had the type of response I was hoping for from the [Early Childhood] Directors. There is a possibility that one or two EC centers are interested in co-collaborating together on this new initiative but, nothing definitive has been decided as yet. Clearly, this ambiguity offers you no help in planning for your year and for this I do apologize.”

With that, Hordiner’s hopes to launch a new Fathers First initiative fizzled away. “I just moved on [with] my life,” he said, always thinking, “maybe someday, maybe someday.”

Laura Cherner, the director of the Community Relations Council at the Jewish Federation of Greater Pittsburgh, told eJP that she believes that if he decided to pitch the program through the official portal, a fathers’ group led by Hordiner, who has partnered with the federation for other programs, would be seriously considered. “I can’t think off the top of my head of fathers’ groups that are equivalent to the several mothers’ groups that I know of,” she said. “So I could definitely see a need for that. Anytime we can empower fathers and children, I think that’s like a wonderful initiative.”

Even though the original Fathers First failed to last, the community it helped birth thrived. “I still hang out with a lot of the guys that went to Fathers First because we’ve just become better friends over time,” Nerenberg said. The mothers and kids became friends, too. Social circles formed. The fathers and children matured and grew. “If you ask our wives [how this community was formed], it’s not that a whole bunch of moms got together, it’s that a whole bunch of dads became friends,” he said.

His teachings stick with the fathers he worked with, said Lael Shapiro, a dad who attended the group for six years, first joining when his daughter was about to turn 2, six weeks before his son was born. He now considers himself a mindful parent who tries to lead by example.

“He made me want to be better,” Shapiro said. “There’s one lesson in particular that really stuck with me that I still think about all the time. And that was a discussion about how for every negative thing that we say to our kids, it takes eight positives to undo that one. So we need to be really careful in what we say to our kids and how we say it.”

Hordiner left his mark on the school. “This particular group was the brainchild and the baby of Dovid Hordiner, so when he left it wasn’t picked up,” said Mendelow, but “the goal of engaging with families and with fathers and with learning still remains as part of Chabad of Stamford to this day. And part of that is because [Hordiner’s] success in this area made an indelible imprint that will always be felt in the community.”