The personal conversations, facilitated by SVIVAH, aim to inspire spiritual reflection during a busy season 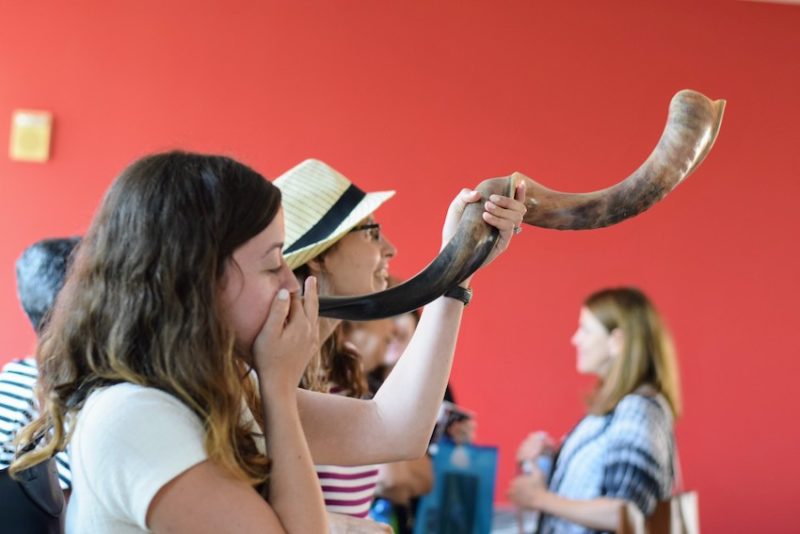 “It’s hard to show up for Elul when it’s still August,” said Ariele Mortkowitz, director of SVIVAH, a new nonprofit focused on building community among Jewish women. The organization is presenting a new series of 17 online conversations with women scholars and spiritual leaders to foster preparation for the soul-searching season — which falls early this year — that leads up to the High Holidays, Mortkowitz told eJewishPhilanthropy.

“We ask them, ‘How are you doing?’ ‘What pieces of Torah have sustained you?’ ‘What are you thinking about Rosh Hashanah?’” Mortkowitz said, noting that the interviews are unique because they empower the teachers to speak on a personal level, instead of an academic or theoretical one.

“We try to bring together Jewish women from all different backgrounds — whether that’s age, religious affiliation, economic status,” said Sperling. “The Torah that’s created when those women come together is different, and transformative.”

The interviewee list includes a range of titles: 11 rabbis, two rabbanits, one rav, one kohenet, or priestess, one who has a doctorate in education and three women who don’t use titles.

Founded in late 2018 in the Washington, D.C., area as a pilot program that provided in-person educational and social events and spiritual and emotional support to about 400 women, SVIVAH’s name means “surround her.” Since the pandemic, it has operated online.

“HerTorah,” a partnership with Yeshivat Maharat, launched in 2019 with a grant from the Aviv Foundation. In 2021, it received a $20,000 “Ignition Grant” from the Covenant Foundation. SVIVAH has almost 900 individual donors in addition to other foundation grants, Mortkowitz said.

“Supporting opportunities for women to gather and learn together has always been important to The Covenant Foundation,” said Harlene Appelman, executive director of the Covenant Foundation. “This series offers women — regardless of how they identify personally or Jewishly — a safe space in which they can explore and connect intellectually and emotionally, to Jewish learning.”

The Elul program also helped SVIVAH solve the problem of how to help women focus on the upcoming holidays since, due to the vagaries of the Hebrew lunar calendar, they start relatively early this year.

The program started on August 15 and runs through September 15.

“The work that SVIVAH is doing reaches well beyond the Orthodox community,” said Rabbi Jessy Dressin, one of the interviewees. Dressin, the senior director of education at the service organization Repair the World, was ordained by Hebrew Union College-Jewish Institute of Religion, and notes that she is not a member of the Orthodox community herself. “It’s a place that gathers women for the transmission of Torah and deep learning, and that is inspiring to me as a woman, as a rabbi and as a progressive Jew.”

In one interview, Kylie Unell, a doctoral fellow studying German Jewish philosophy at New York University and the founder of a Jewish organization, told Mortkowitz that “There’s no instruction guide” for Elul, but tried to sketch out its purpose as she sees it.

In another video, Rabbi Isabel de Koninck, who received rabbinic ordination from the Reconstructionist Rabbinical College and is the executive director of Hillel at Drexel University, talked with Mortkowitz about how an executive coach challenged her to rethink her reactions to some difficult professional interactions.

“That’s the thing I need Elul for — is to get that reset so that I can let go of suspicion in the places where it doesn’t need to be and let the generosity come in so that I can be present to the multiple narratives that might be going on for someone who’s showing up in a challenging way in my life,” de Koninck said.

Another benefit of the Elul “HerTorah” series emerged when two of the interviewees mentioned the “Kranjec Test” — a Jewish version of the “Bechdel Test” popularized by cartoonist Allison Bechdel, who suggested it to measure the representation of women in fiction. A work that passes must feature at least two women who talk to each other about something other than a man. The Jewish version is named for Danielle Kranjec, a Hillel International educator, and challenges educators to include at least one woman’s voice in the “source sheets” they use to teach.

“HerTorah” is already focused on elevating women’s scholarship, Sperling said. She and Mortkowitz hope that the interview series will also introduce more female teachers to the broader Jewish community.

“It’s not that women don’t have things to say, it’s that we don’t have the forum and the publicity,” Sperling said.

Dressin said she thinks the interviews will serve that purpose at Repair the World, where educators are actively trying to increase the number of female and non-binary scholars they cite.

“I told Ariele I wanted to share this with my colleagues,” she said. “This link will be valuable well beyond the month of Elul.”