Although HIAS is focused on refugee aid, JCORE’s work against racism and on relations between Jews and other minorities in the U.K. will continue. 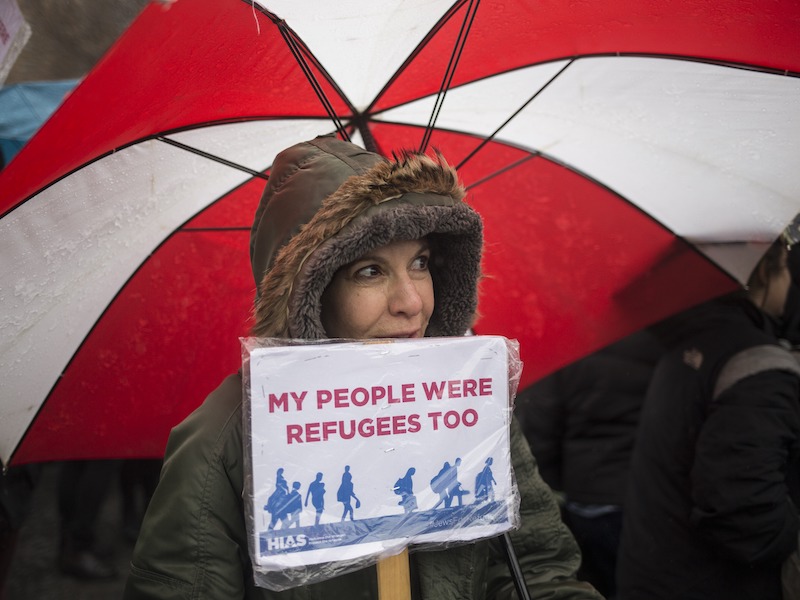 A woman attends a rally on behalf of refugees in New York City in 2017.

More than 140 years ago, the Hebrew Immigrant Aid Society was founded to welcome and resettle Jews into the United States. But about five years ago, HIAS realized that it had to start looking beyond the U.S.’s borders.

Facing a presidential administration in 2017 that opposed most refugee resettlement, which made fulfilling its core mission close to impossible, HIAS pivoted to the rest of the world, founding branches in recent years in the European Union, Mexico and several other countries.

Now, as political realities have shifted and an outflow of Ukrainian refugees has streamed into Europe, HIAS is taking one more step in its international expansion. It announced yesterday that it is combining with the Jewish Council for Racial Equality (JCORE), a British group founded in 1976 that combats racism and, like HIAS, works on refugee aid.

The two organizations have been in the process of combining for more than a year. JCORE’s budget of less than $300,000 will be added onto HIAS’ annual $147 million budget, and its five employees will join HIAS’ global staff of more than 1,600. Two of the seven board members of JCORE, which will now be known as JCORE HIAS UK, will be appointed by HIAS. Although HIAS is focused on refugee aid, JCORE’s work against racism and on relations between Jews and other minorities in the U.K. will continue.

“We’ve always been interested in engaging in the U.K. and the Jewish community there is similar in many ways to that of the United States in terms of having a significant part of it that is engaged in social issues and human rights issues,” HIAS CEO Mark Hetfield told eJewishPhilanthropy. “[JCORE staff] engage synagogues on asylum seekers and refugees. They advocate through the Jewish lens on those issues.”

In addition to cultural similarities, Hetfield said another incentive for the move was that the U.S. and U.K. have similar systems for welcoming Ukrainian refugees, a streamlined process offering temporary protection that relies on local communities, like synagogues, to sponsor their arrival. According to the BBC, more than 60,000 Ukrainians have entered the U.K. since Russia’s invasion began in late February. The U.S. has pledged to take in up to 100,000 Ukrainian refugees, though it appears the actual number who have entered is much smaller.

“We have some mixed feelings about this, because it doesn’t offer refugees the option of a permanent status in the country, it does allow for communities to engage in their resettlement,” Hetfield said. “It’s more grassroots-focused than resettlement has been [in the past].”

Like other Jewish organizations, HIAS’ core work on Ukraine is happening on that country’s borders, where HIAS is aiding local communities in absorbing refugees. It is also in the process of opening offices in Poland, Moldova and Romania, where the bulk of Ukrainian refugees have fled.

Despite the commonalities between JCORE and HIAS, Hetfield said that its new British outpost will be led by people from the U.K. Staffing international offices with locals has been a necessity, he explained, given each Jewish community’s slightly different approach to refugee aid.

While HIAS emphasizes working with synagogues in the U.S., for example, it can’t replicate that exact system in Europe, where communities tend to be more centralized and denominational affiliation breaks down differently. Common Jewish observances can also reveal differences: HIAS’ European partners also said the group’s Haggadah supplement, written for an American audience, wouldn’t work across the Atlantic; instead, they crafted their own.