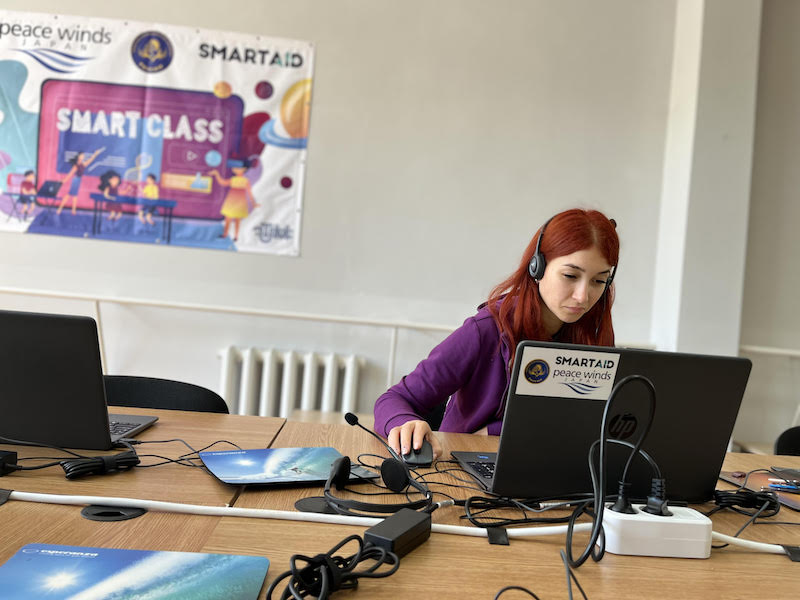 A Ukrainian child refugee studies at one of SmartAid's computers.

The room in the refugee center in Moldova looks more like an advanced customer call center than a classroom: 20 laptops with noise-canceling headsets, an interactive projector at the front of the room, high-speed internet access powered by SpaceX’s Starlink satellite internet service.

But after 45 minutes of quietly concentrating on the screens, the 15 children sitting at the desks put down their headsets and run off towards recess, the sounds of shrieks and games echoing through the hall.

There are more than 170 classrooms like this one across Poland, Moldova and Ukraine, run by SmartAid, an NGO founded in Israel in 2016 to provide customized tech responses to humanitarian and natural disasters around the world. In Moldova, SmartAid partners with the International Center for Cooperation & Development Phoenix, a local organization, to run nine smart classrooms for Ukrainian refugee children, with five more set to open this month.

The classrooms are an outgrowth of a project from the Ukrainian Ministry of Education called the “All-Ukrainian Online Schedule,” which allows students to continue their classes with Ukrainian teachers online, regardless of where the students or teachers are located. Even when kids in the same room log into different classrooms, they still have a similar break schedule. Around 90,000 Ukrainians are still in Moldova today, according to the United Nations High Commissioner for Refugees.

“We discovered, after a month, that one of the big problems is studying,” said Irina Rusanovschi, the founder and director of Phoenix, a Moldovan NGO she created in 2014 to focus on local children’s issues. “When we went to visit the refugee centers, we saw kids and students sitting in front of their mobile phones for hours to try to be online with their teachers in Ukraine.”

Rusanovschi and other parents like her know from the pandemic how hard it is for kids to try to study online. Around 7 million Ukrainians have left since the Russian invasion in February, and around 4 million have returned, according to United Nations data. Many refugee families in Moldova are housed in dormitories with everyone in the same room, and the buildings do not have sufficient internet bandwidth for all the kids to be online at the same time.

SmartAid’s classrooms try to eliminate those problems by taking students out of their living spaces.

“It’s important for them to be all together in the same room, because when they have free time, they can communicate with other students around them,” Rusanovschi said, adding that this helps combat some of the isolation that dogged Zoom classes during the pandemic.

The classrooms are one of SmartAid’s many interventions in international crises. Shachar Zahavi, the group’s co-founder, knows what it’s like to be the first on the ground after a natural or humanitarian disaster. He has coordinated relief in dozens of emergency situations over 18 years, first as the founder and CEO of IsraAid, an Israeli first responder and disaster relief organization that launched two decades ago and has sent teams to disaster zones around the world.

Zahavi first started thinking about the glaring gap between how aid organizations were utilizing existing technology during the 2010 earthquake in Haiti, which killed, by some estimates, 300,000 people.

“In the beginning, no organization was willing to go into Port-Au-Prince because we were afraid of riots,” he said. “But if there was a use of drones [to view the city], we could have seen there were no riots, and we wouldn’t have lost two to three days of response.”

The main challenge that SmartAid tries to address is the disconnect between the people on the ground in disaster areas and the tech companies far away in their offices in Silicon Valley or Tel Aviv: Doctors, social workers, nurses and teachers on the ground have local and cultural knowledge, but might not be familiar with cutting-edge technology. Tech companies employ programmers and developers who are passionate about social justice and who are up on the latest gadgets and software, but lack the cultural knowledge to adapt their technology successfully for local implementation.

“The idea behind it is building some kind of a bridge between the tech world and the aid world,” said Zahavi. “The use of technology in [the] nonprofit world is really low… It’s become a little more popular since COVID-19, but not at the level that it can really affect humanitarian aid.”

In Zahavi’s experience, when most humanitarian aid organizations think about cooperating with tech companies, they consider those companies as financial donors only. Zahavi wants to change that, to get the tech companies more involved in shaping disaster response itself.

“It’s not just to bring the tech to humanitarian organizations, but also to help the tech community understand that you have amazing ideas, but there’s a difference between [solutions for] Uganda and Kenya and Rwanda,” said Zahavi. Although the countries are next to each other, he added, “The differences are big, because in one country the telecom and [financial technology] is more upgraded, and [in] the other ones it’s less.”

SmartAid gets its funding from Kärcher, the Ted Arison Family Foundation and other corporations and private donors.It has 10 full-time employees, 50 rotating project-based employees and more than 300 core volunteers. SmartAid’s estimated 2022 budget is $900,000, up from $300,000 in 2021. It receives donated services from tech firms that have a value of around $5.5 million, including hardware, software, products and services from marquee companies like Elon Musk’s SpaceX, Salesforce, Toyota and DHL.

SmartAid has deployed that approach in past crises as well. Immediately after Hurricane Dorian hit the Bahamas on Sept. 1, 2019, killing 74 people and causing $3.4 billion of damage, the biggest need was for telecommunications. The storm had wiped out the internet and phone lines on the hard-hit Abaco Island, and aid workers on the ground had no way to coordinate with their organizations or with each other about what was needed where. SmartAid built a communications hub where aid workers could access the internet through SmartAid computers or a WiFi connection powered by Starlink satellite, and also provided  walkie-talkies to organizations and distributed 5,000 solar-powered lights in addition to portable water purifiers and hygiene packs for women.

Zahavi has found that providing telecommunications is essential to relief efforts, and can even be a challenge in developed countries.  Following Russia’s invasion of Ukraine, remote border crossings to Poland and Moldova had bare-bones communication infrastructure and couldn’t handle the tens of thousands of refugees passing through each day, as well as the hundreds of organizations trying to help —who were relying, in some cases, on a single cell tower.

Zahavi also stressed the importance of understanding what infrastructure is and is not available in the area groups want to serve. In the early days of the Ukraine crisis, organizations received many donations of medical devices for the front lines. But a lot of the donations were earmarked for places without reliable electricity, which the devices needed to function. SmartAid addressed the issue by trying to match solar generators with devices in need of power.

A potential area of growth, Zahavi said, is in financial technology, or fintech. Direct cash relief is one of the most efficient and effective ways to support people displaced by conflict or disaster, according to the International Rescue Committee. But it can be difficult, or even dangerous, to get that cash or preloaded credit cards into people’s hands if they are located in areas of active fighting or banks are in collapse. Fintech payment apps like Venmo or PayPal allow for transactions to continue without cash or local bank infrastructure.

In Afghanistan, SmartAid is supporting vulnerable women with cash relief and communication packs of cell phones and solar chargers to connect them to mental health professionals.

“There are high-tech and low-tech solutions, and it doesn’t need to be the AI [artificial intelligence], it can be three levels lower,” said Zahavi. “There’s clean water that is a product of pulling humidity from the air, or clean water that pumps water through sand and special chemicals that cleans the water,” he said. “There are a lot of different levels of technology that eventually get the water clean.”

One of the hurdles of using tech for disaster relief, Zahavi said, is the problem of what to do when devices break. If a product sits in a corner gathering dust because no one knows how to fix it, it’s useless. In Ukraine, where there are nearly 300,000 people working in tech, that wasn’t an issue. But elsewhere, it can be.

SmartAid tries to identify local professionals who can repair the technology. It also works to make sure that, following any disaster, the technology can stay in the community that hosted the refugees, in order to make locals feel like they’re also valued.

For the smart classrooms, this means that, if and when the Ukrainian students are able to return home, the laptops and smart classrooms will stay in Moldova. Rusanovschi said most of the refugee centers in the capital city of Chisinau are currently housed in educational buildings, so an in-house computer lab will be useful in the future.

In the meantime, they’ve started using the smart classrooms at night, to teach Ukrainian parents Romanian and English in hopes of helping them adapt to their new lives. And during the day, Rusanovschi said, the smart classrooms provide a small bit of normalcy for children who have spent the last six months in limbo.

They wake up, go to a school, do their classes and they are together with other kids,” she said. “They’re making friends. There’s a feeling of going to school.”