Dispatches from Vienna: Y.U. students reflect on the refugee crisis

From March 13-20, 28 Yeshiva University students traveled to Vienna to volunteer with Ukrainian refugees under the auspices of its Rabbi Lord Jonathan Sacks-Herenstein Center and the Office of Student Life. Students were accompanied by Rabbi Joshua Blass, a Mashgiach Ruchani at Y.U. and Vice Provost Dr. Erica Brown, director of the Sacks-Herenstein Center. Y.U.’s President Rabbi Ari Berman surprised the group in Vienna. As students, we wanted to share some of our individual interactions and thoughts  — our dispatches — on an unforgettable experience that obligates us to help now, even from afar. 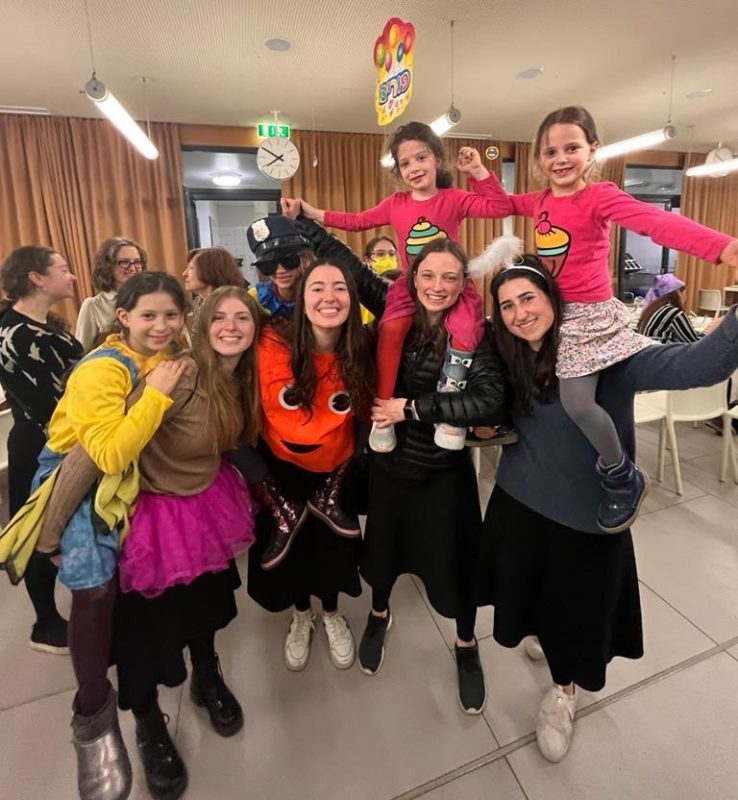 Meir is an eleven-year old boy from Karhkiv who likes Legos and, like me, hated the Viennese side dish that was served at dinner. He introduced me to his father, Yehoshua, a man with a long brown beard and wrinkly cheeks who laughed as he said he could not join in the spontaneous tisch we started at a local Jewish school because there was no L’chaim. I also met Ya’akov, the Chief Mohel of Ukraine, who had performed over 7,000 britot before he was forced to leave his home. In the dining room there are old men sitting alone and staring blankly ahead, deep in thought. There are children running around tossing balls and sitting on the floor drawing pictures. There are pregnant women deep in conversation with their husbands. I can’t tell if they are planning a new future or trying to figure out what to do with their children the next day. Notably, there is an absence of men between the ages of 18 and 60, who must stay behind to serve in the army. They are still in Ukraine, unable to join their families who, like it or not, may be beginning new lives.

For those who, by chance or good fortune, happen not to be situated in the middle of this crisis, it can be hard to appreciate what’s going on on the ground. The world is watching a brave leader rally his severely outmatched nation to relentlessly resist an unjust foreign invasion. They see millions of Ukrainian refugees being housed, fed, and taken care of by total strangers across Europe. Jewish refugees are being sheltered and supported by the Viennese Jewish community. Images of immense suffering –- children gripping ragged dolls as they come off of trains, women weeping as they let go of their husbands’ hand for what could be the last time, stone-faced men uncomfortably holding guns for the first time –- are plastered across TV screens and front pages. But all of this fails to fully capture the reality.

The situation is complex and ever-changing. We spend our days in the various hotels hosting refugees, folding laundry, taking out garbage, mopping floors, cleaning bathrooms, entertaining children and conversing with older refugees. The operation here is well-organized and, by necessity, functions on the fly. We go where we are told when we are told and help in whatever way we can.

The need here is great. People have to be fed. They need medicine and clothing, and electronics to communicate with loved ones. Children need to be taught and entertained. Hotels need to keep the heat and electricity running. We brought 60 suitcases full of donations, including 65 phones, computers, and tablets, 79 puzzles, 83 candlesticks, 84 mezuzot, and 1,440 kippot.

More refugees come to Vienna every day, and the needs are constantly changing. This is compounded by the fact that the Jewish community in Vienna has committed itself to hosting however many refugees come for as long as they need to be here. Their offer is generous by any standards, but it is especially bold because they don’t have the money to keep this going.

Yakov, 79, traveled five days from Kharkov to Vienna. He arrived 14 days ago with his wife, Yelena, daughter, Tanya and grandson, Max. I met Yakov and Tanya at a job fair, run by the Jewish Viennese community, to prepare for the possibility that most Ukrainian refugees will have to stay in Vienna for the foreseeable future or permanently. Yakov exclaimed that he cannot wait to go back and begin rebuilding his city, his country. It just may not happen.

Later in the day, I ate dinner with them at the Jewish kindergarten-turned-food-shelter. There, I met Tanya’s son, 10-year-old Max. His dad is back home fighting the war; Tanya was delighted to share that her husband, Bob Basset, is a world-renown artist, recognized by Vogue International and New York Times Fashion Magazine. She showed me her WhatsApp messages from him – a picture of a disco hall before a Russian raid, and then the aftermath of it lit up in flames. She smiled and told me in broken English, “I’m very blessed to be in contact with him every day.”

Yakov was born in the Soviet Union. He has strong Jewish roots and feelings but not a lot of Jewish knowledge. After the job fair, I saw him walk up to a volunteer and ask to wrap tefillin, a Jewish ritual act. Just then, my fellow volunteers, all of us undergraduate students, started spontaneously singing Hebrew songs. Yakov and his wife pulled up a chair to join in. He didn’t know the words but wanted to be part of this powerful circle of belonging. Shortly after, we started to dance. Hands intertwined, Yakov joined a circle with the other men, who sang loudly while Yakov smiled.

Her name is Miriam. She’s 18. Last week she was home, studying social sciences in university. She has a mother and father and a little brother and sister. Now she’s living out of a motel in Vienna with her brother and sister. Without her mother and father. Her parents are still in Ukraine. Her father has been drafted to serve in the Ukrainian army. I met Miriam at lunch in a community center in Vienna where we waited in a soup kitchen style line for goulash and rice.

I may not be able to do much alone, but together, we can do a lot. I, along with 27 other Yeshiva University students, travelled across the globe to offer whatever help we can. Money. Clothing. Smiles. We managed to raise upwards of $120,000, which will go directly to the Jewish communal infrastructure in Vienna that feeds Miriam and all her fellow refugees for a week.

My friends and I were in Vienna for a week, but then we got to go home. Miriam doesn’t get to go home. She doesn’t know where to even call home. Please help feed Miriam and her little brother and sister and the other Ukrainian refugees that are part of our global Jewish family.