Despite fraught conversations, this Black-Jewish dialogue group in Cleveland wants to keep talking

The program, called Rekindle, got a boost in visibility on Saturday night, when it was one of the co-hosts of a concert by Nissim Black, a Black Hasidic rapper. 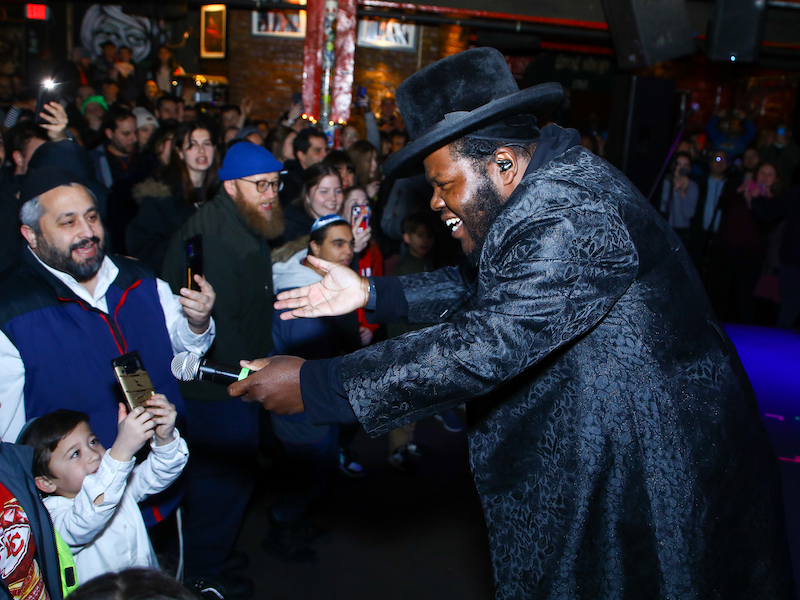 Nissim Black in concert at the Grog Shop in Cleveland Heights, Ohio on Dec. 17, 2022.

One night last month, seven Jews and a Black Christian gathered in a food court in the Cleveland suburb of Shaker Heights to have lunch and talk about Kyrie Irving.

Many Clevelanders have harbored fond feelings for Irving, who spent the beginning of his standout career with the Cavaliers, the city’s NBA team. But the group of eight that sat down to eat were there to talk about something else: Irving’s recent promotion of an antisemitic movie and book — and how they should react to it.

That conversation didn’t start over lunch. All eight people were alumni of a Cleveland-area group called Rekindle, which brings cohorts of Black and Jewish locals together for 12 hours of discussion, spaced out over four sessions. The program’s 70 alumni have continued the conversations in a WhatsApp group, where recent talk had turned to Irving’s remarks. After some Black members of the group said that they wanted to watch the film, which includes a litany of antisemitic rhetoric including Holocaust denial, a smaller group of alumni decided it would be better to talk face-to-face.

The conversations were something of a stress test for Rekindle, a two-year-old organization with a tiny budget and no paid staff that is trying to pioneer in Cleveland what it hopes will be, per its name, a national reigniting of the alliance between Black and Jewish activists that flourished during the civil rights era. The group’s Jewish co-founder, Matt Fieldman, told eJewishPhilanthropy that he and his colleagues know that the fellowship is “not going to fix racism and antisemitism.” But in recent weeks, such topics have become unavoidable.

“Texting in a group is a terrible place to have a conversation,” said Rabbi Chase Foster, the Rekindle alumnus who organized the lunch. In the WhatsApp conversation, he said, it appeared that “The pain and hurt was felt more by the Jewish community and in many ways did not resonate as much with some members of the Black community.”

Meeting in person did make a difference, said Ronald Crosby, the Black alumnus who came to the lunch, because texting doesn’t “give you the emotional response.”

“From my perspective, it was just fantastic to speak, to have the conversation,” Crosby, who does not think people should view the film Irving promoted, told eJP. “Around us, the world is going on… but we’re having a conversation.”

That, in a sense, is the raison d’etre of Rekindle — to put Jews in conversation with Black Christians as a way, on the grassroots level, to strengthen ties that may feel like they have frayed. The program’s 70 alumni are a drop in the bucket of the more than 80,000 Jews and hundreds of thousands of Black people in the Cleveland area. But the initiative’s co-founders, Fieldman and Charmaine D. Rice, hope that the discussions can spark broader change.

“One of the biggest takeaways that people mention are the relationships that they’re building,” Rice told eJP regarding Rekindle’s fellows. “Folks who have gone to dinner together and opened up a little bit more of a personal perspective to try to establish those meaningful relationships…  The goal is not groupthink, the goal is for relationships to develop to create space for us to disagree agreeably.”

The program got a boost in visibility on Saturday night, when Rekindle was one of the co-hosts of a concert by Nissim Black, a Black Hasidic rapper. Some 350 people attended the concert, and Black toured the Rock & Roll Hall of Fame in Cleveland and met with Rekindle alumni. Speaking to eJP in late October (amid Kanye West’s ongoing stream of antisemitism, but days before Irving’s tweet), Black, who is originally from Seattle and now lives in the central Israeli city of Beit Shemesh, said that he feels faith in God can help build bridges between Black and Jewish communities.

“Black people have always been people of faith, and the faith has always rescued people and given them hope,” he told eJP. “I think there’s a lot more similarities there than there are differences.”

Following the concert, Black told eJP he appreciated “the overall energy. It was a lot of love.” He said he hopes Rekindle’s efforts expand because its mission is “the elephant in the room nobody ever wants to deal with, but it needs to be dealt with.”

“It’s the meeting of the underdogs,” he said regarding Black-Jewish dialogue. “You’re talking about two minority groups that, especially when meshed together, influence the whole entire world.”

The Rekindle program was founded in 2020, before the murder of George Floyd and the subsequent protests, and cohorts began meeting the following year. So far, five cohorts have met with an average of 14 people each. Rekindle has a budget of less than $35,000 and its founders also have other jobs. Fieldman works in workforce development and Rice is a diversity, equity and inclusion consultant. The organization received startup funding from the Harry and Jeanette Weinberg Foundation and the Natan Fund.

“Within our confronting antisemitism portfolio, we very much believe in bringing different groups together, particularly across divides — whether they be faith-based, political-based or just people who don’t tend to spend a tremendous amount of time together,” Adina Poupko, executive director of the Natan Fund, which began supporting Rekindle in June, told eJP. “Relationship building and friendship is core to our work confronting antisemitism… The more you know someone, the less likely you are to hate them.”

Rekindle also received seed funding from the Young Leadership Division of the Jewish Federation of Cleveland. The federation’s chief marketing officer, Rob Berick, told eJP that the federation is “so pleased to see how the program has continued over the years.” He added that the federation’s Community Relations Committee “has worked diligently to build strong, collaborative relationships with other ethnic, racial, civic and religious groups throughout Greater Cleveland – including the Black community.”

Rekindle was born when Fieldman, who has a history of social entrepreneurship and had recently moved to Cleveland, realized that “my Jewish friends didn’t know my Black friends, and that the line between the two communities was really stark.” Rice says she realized the need for the group after attending a Shabbat dinner, and noticing how little contact there was between some local Black and Jewish residents. Fieldman said the goal is to spawn other Rekindle chapters in cities across the country.

“We want to build bridges, we want to inspire impact, we want to plant seeds by investing in changemakers who will move the needle over the years to come, and we want to scale nationally,” Fieldman said. “Could we create something that people were excited about and they’d share with their friends and family?”

The participants have ranged in age from 30 to 70, and Rekindle seeks a diversity of religiosity and socioeconomic status, as well as gender, for each cohort, with the recognition that, in Rice’s words, “neither community is a monolith.” There’s currently a waitlist of applicants.

The four three-hour sessions aim to both give people an overview of Black and Jewish history and identity, as well as spark discussion about how the two groups can move forward together. To that end, the Rekindle fellows collaborate in small groups on “action projects” — for example, staffing a holiday charity drive, or conducting a voter turnout campaign.

The first of the four sessions discusses Black and Jewish identity and historical trauma, as well as the highlights of Black-Jewish collaboration (such as the famed friendship between Rabbi Abraham Joshua Heschel and Rev. Martin Luther King Jr.). The second session discusses the role of faith in Jewish and Black communities and splits the cohorts into groups for action projects. The third session, in Fieldman’s words, covers how “to move the needle on racial justice,” and includes a talk by a Jew of color. In the final session, the groups move forward on action projects and read King’s “Letter from Birmingham Jail.”

While the fellows read James Baldwin’s 1967 New York Times Magazine essay on the complexities of Black-Jewish relations and antisemitism among Black Americans, Fieldman says that the curriculum does not dwell on historical points of friction in the relationship between Black and Jewish Americans.

“What we talk about more is where we are right now: so, the challenges of privilege, the challenge of class,” he said, but added, “We don’t dive too much into the historical split. That’s there, and we don’t deny it. But what we’d rather do is talk about, OK, where are we today and how can we address our differences today? … Let’s start with white Jews, Black folks, we have this history, let’s review it and let’s rekindle the positive parts of it.”

That approach, alumni said, gets tested when controversies surface like the one surrounding Irving. But Crosby hopes he and his peers can move beyond it.

“Once this 15 minutes of fame is over, we still have two hurt communities,” he said.