The report points to an established Jewish infrastructure in the region, a Jewish community that felt compelled to help due to historical ties and what interviewees described as a surprising amount of interorganizational collaboration. 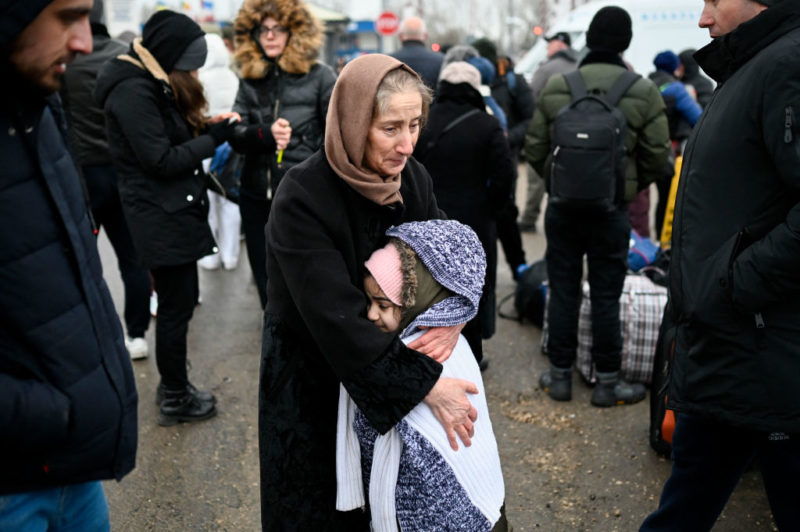 TOPSHOT - A woman hugs a girl as refugees from Ukraine wait for a transport at the Moldova-Ukrainian border's checkpoint near the town of Palanca on March 1, 2022. (Photo by Nikolay DOYCHINOV / AFP) (Photo by NIKOLAY DOYCHINOV/AFP via Getty Images)

From the day Russia’s invasion of Ukraine began nearly five months ago, the Jewish organizational response has been robust and widespread — ranging from raising tens of millions of dollars to saving refugees to mobilizing volunteers and creating long-term response plans.

Now, a new survey describes why Jewish organizations were able to mobilize so quickly to help Ukraine — as well as naming the pitfalls that lie ahead. Commissioned by Olam, a network of Jewish global service agencies, and composed by Rosov Consulting, the report is based on 25 interviews with representatives of 21 aid groups, from large organizations such as the American Jewish Joint Distribution Committee (JDC) to Israeli government aid operations such as MASHAV to smaller grassroots outfits such as the Ukraine Support Teams, a network of volunteers.

The report points to an established Jewish infrastructure in the region, a Jewish community that felt compelled to help due to historical ties and what interviewees described as a surprising amount of interorganizational collaboration. But it warns that the arrival of delegations and inexperienced volunteers has hindered disaster response efforts, and that waning attention toward the war could threaten future funding.

“There is significant Jewish infrastructure in Ukraine,” the report reads. “Several organizations have maintained extensive networks in Ukraine for decades. During the crisis, these communities and networks have served as both foundation and scaffolding for other Jewish and Israeli organizations to provide an unprecedented level of response.”

Olam CEO Dyonna Ginsburg told eJewishPhilanthropy that she noticed how much interviewees praised intergroup collaboration in their interviews, which were quoted anonymously. One interviewee described a chain by which a refugee might be aided via funds from the JDC, fed by another group, then flown to Tel Aviv by The Jewish Agency for Israel.

“[Collaboration] is particularly challenging in disaster response because competition is fierce for dollars, for attention and because things are happening super quickly,” she said. “So those conditions are not ripe for collaboration. Those conditions are more ripe for competition. Generally, to build partnerships, that requires time and processes, and it’s when you’re not in the limelight and not dealing with funding coming in at that moment.”

The Jewish organizational infrastructure in Ukraine dates to before World War II, and grew during the Cold War and following the collapse of the Soviet Union. The report notes that the legacy of the Holocaust loomed large in many organizations’ decisions to help. “There is definitely a Shoah resonance: ‘They didn’t help us then, 80 years ago, so now we’ll show them that we can help now,’” one interviewee told the researchers. “There is a psychological element to it.”

The report said that help came from both large established groups and grassroots networks activated specifically to address this crisis. The establishment groups had more resources and could operate at a greater scale, the report said, though they tended to move more slowly. Grassroots groups were smaller and could be faster in their responses, but their members risked burning out more quickly and they sometimes did not have processes to vet their volunteers, according to the report.

One section of the report dealt with the challenges posed by leadership delegations as well as inexperienced volunteers who arrived in the region. “Several interviewees found it challenging to see ‘whole delegations with no relevant skills, no language, they are a burden on the system, they just stand there and look at people in the train station, they can’t help them with anything!’” said the report, quoting an interviewee.

Organizations that have sent delegations have countered such critiques by saying that being able to witness the relief efforts and report back to their communities helps spur fundraising and addresses the second challenge named by the report: waning attention on the war and its victims. Ginsburg said that may be true, but advised that groups organizing leadership delegations should include a concrete responsibility for the participants — whether a fundraising goal or a commitment to speak about the issue publicly a certain number of times.

Ginsburg said that the report reflects that delegations have value but that “both the sending organizations and the receiving organizations need to set expectations about how many resources they can devote to welcoming leadership groups, what are the clear expectations about what someone is supposed to do when they get back, so that you really do ensure that you’re getting the most significant return on the investment.”

Ginsburg added that she understands that “multiple Jewish touchpoints in Ukraine” led Jewish organizations to respond so significantly to this crisis. She hopes this experience spurs Jewish groups to also respond energetically to other crises around the world.

“There is a general sense that the Jewish community stepped up in significant ways,” she said. “I do wonder whether this is an opportunity, a teachable moment to be cultivating more compassion, awareness about the plight of refugees around the world and other humanitarian crises.”