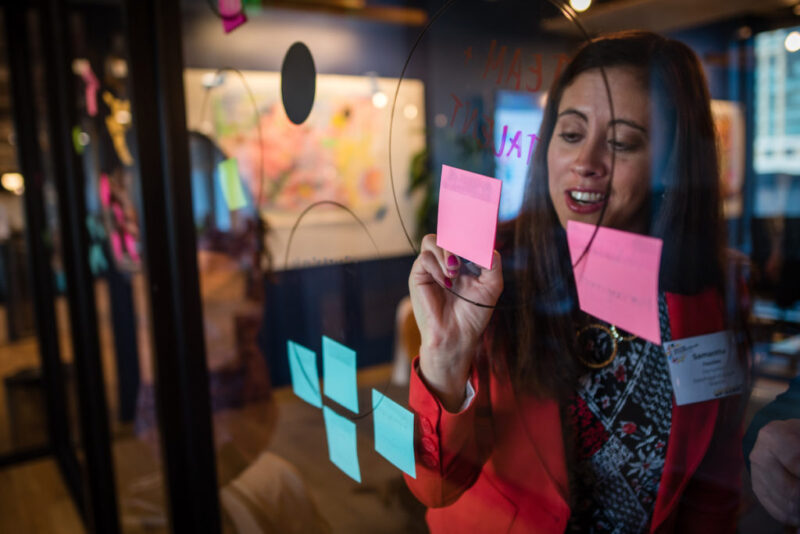 Since the Boston-based Mayyim Hayyim opened its doors in 2004 and reimagined the notion of the mikveh, community ritual baths have sprung up all over the country using its inclusive model. Now, the organization’s Rising Tide Open Waters Mikveh Network appears poised to grow, thanks to a new partnership between the Bay Area social entrepreneurship incubator UpStart and Giving Group Community, a platform for philanthropists.

“The support we’ve received [from UpStart] — financial, skills, coaching and connections — has been and continues to be such a blessing,” Mayyim Hayyim’s CEO, Carrie Bornstein, told eJewishPhilanthropy. The GGC connection will enable Mayyim Hayyim’s Rising Tide Open Waters Mikveh Network to focus on making a deeper investment in select communities, she added.

“Because so much of the success of this work relies on the leadership of each community, our current strategy is to focus where the deepest interest lies. With resources like our Mikveh Starter Toolkit, Seven Steps Mikveh Guide training, webinars, and online resource portal, it is more realistic and more efficient [than ever] for communities to open and sustain their own community mikveh,” Bornstein said.

Mayyim Hayyim is just one of six UpStart projects that will benefit from the new partnership, which introduces innovative projects to funders looking to support new initiatives.

Based in the San Francisco Bay Area, UpStart has been developing and investing in Jewish social entrepreneurship since 2008, with targeted support for new initiatives and their leaders ranging from fellowships, incubators and accelerators to network- and skills-building opportunities. In 2021, Giving Group Community (GGC) emerged as a 501(c)(3) with a proprietary platform for Jewish philanthropists of a certain level to invest in pre-vetted Jewish and Israeli nonprofits; 80% of featured causes are based in Israel, and about 20% elsewhere, mostly the United States. As 2023 begins, the two organizations are collaborating toward building a more vibrant Jewish future.

GGC provides its donors with a menu of causes to support; now, that “deal flow” of highlighted causes will include seven projects of Jewish social entrepreneurship, six of them from the UpStart venture network’s 129 organizations: Jewish Studio Project, which nurtures creativity to deepen connection to Judaism; Grow Torah and its hands-on environmental education programs; BaMidbar, which supports Jewish youth mental health and wellness; spirituality and mindfulness organization Or Halev; mikveh network Mayyim Hayyim; and Jewish education model Jewish Kids Groups. GGC has added a seventh project, the New York-based project Athletes For Israel, which is not an UpStart-cultivated project but mobilizes athlete-influencers to transform the public conversation about Israel.

“The organizations in the UpStart Network are working to make Jewish experiences more relevant and meaningful but often face challenges with fundraising and access to new funding prospects,” said Aaron Katler, UpStart’s CEO. “Featuring their work on a site dedicated to increasing their visibility, amplifying their impact and expanding funding opportunities presented a clear win for everyone involved.”

GGC founder Seth Davis told eJP that 80% of the group’s philanthropists come from the United States, with families and foundations in Canada, Israel, Australia, Europe and South America making up the other 20%.

The organization selected UpStart-developed initiatives organizers felt were high-impact for Jewish communities and people, considering the number of people served; the innovation of the organization’s approach; ensuring the organization has a fairly low budget, overhead and programmatic cost; and its potential to complement the work of existing Jewish institutions and agencies and positively benefit the local Jewish community. The local partners component is important, Davis said, because “not all, but a lot of people” prioritize their funding first for local community, then to national groups and then to Israel.

“It’s important for us to enable people to bring something to their own community to impact their own children, their grandchildren — that’s how they look at it,” Davis said, noting that the showcased projects were selected because they’re open to collaboration and running pilot programs in other communities. “There’s not so many organizations that have a model, that have a stage where they’ve started testing and even have some funding from a big funder to scale,” he said, noting that the UpStart organizations were at a stage where they were not enormous but had the potential to grow and be locally replicated.

GGC’s due diligence in selecting these entrepreneurial organizations started with assessing the projects’ leadership, executive team and board and ensuring that they have a strategic growth plan in place, with a “healthy” budget and clear key performance indicators (KPIs) for several years into the future. The initiatives also had to have successful local pilots under their belt, a major foundation and/or major donor already supporting growth and research and/or measurements of programs’ impact.

GGC now has about 200 users on the platform representing about 80 entities with a philanthropic capacity ranging from $100,000 to $10 million. Each member decides if and how much to donate to each cause, more like an investment portfolio than a giving circle, Davis said. Members range in age from teenagers — who are using the platform with the supervision of their parents or grandparents, and whose approval is required for all grants — to those in their 40s-50s. Davis added that the number of 30-somethings with new wealth “who like using the platform and the community” is increasing.

In 2017, Upstart — formerly UpStart Bay Area — merged with three organizations developing social entrepreneurship and leadership in the Jewish community: Bikkurim, Joshua Venture Group and the U.S. programs of PresenTense. The integration united nearly 20 years of experience in the innovation and social entrepreneurship space and enabled the organizations to amplify their work in one initiative. Over the course of their collective organizational lifetimes, these organizations have fueled the impact of over 1,450 initiatives and trained more than 3,200 of the Jewish community’s innovative leaders. UpStart now focuses on supporting Jewish projects and their leaders with early stage learning offerings — self-directed trainings, webinars and tools that are free and open to anyone with an idea they’d like to investigate — and a 12-month venture accelerator for entrepreneurs with established ventures looking to grow, sustain and scale their ideas, which provides training, connections and funding toward expanding the projects’ impact and growth.

“I would say that we learn from each other,” Davis said about the partnership, noting that UpStart is better at integrating efforts to promote diversity, equity and inclusion, and that its experience with strategy and leadership development complements GGC’s fundraising and philanthropic development experience. UpStart’s commitment to support its network powered the collaboration, he added.

As part of UpStart’s recent strategic planning process, its leadership considered developing a similar platform and ultimately decided to focus on what Katler called “our core value proposition of business incubation and acceleration.”

“We sought out partners whose sole focus was a giving platform, and Seth and GGC fit that criteria perfectly,” Katler said, adding that, after a successful pilot, UpStart and GGC “hope to continue expanding the partnership.”

In addition to their potential for local partnership and benefit to Jewish people, chosen organizations were also required to have what Davis called “outstanding leadership,” a category that includes staff with years of experience, as well as references “willing to recommend them who will say they are extraordinary. They’re open to partnering and learning, they come up with an approach of ‘we want to impact the ecosystem’…we see them growing beyond the organization that they’re leading over time because they’re unique leaders.”

The financial health of the organization is also a factor; Davis said GGC also examines the financials to observe growth patterns, how much is being spent for administration versus programming, salaries, etc. “We advise internally with a CPA and we check this in-depth,’ Davis said. “I think we look at budgets more than probably 95% of the industry.”

Davis said GGC also interviewed the leaders of the organizations, asking them about whether they have cash reserves and how they use them, whether the board members are contributing financially and how many key funders they have.

Selected organizations had to be willing to create a new set of materials — usually including a video — that will be shown to potential funders who are part of what Davis calls a “new wave of philanthropy” that was “definitely different than the dor [generation] after the Shoah.”

“The 70-year-olds have been some of the biggest philanthropists in our time,” Davis said. “But they were more emotional, more thoughtful, in a way, of the ecosystem. Now it’s more business-like driven in many cases for many people.”