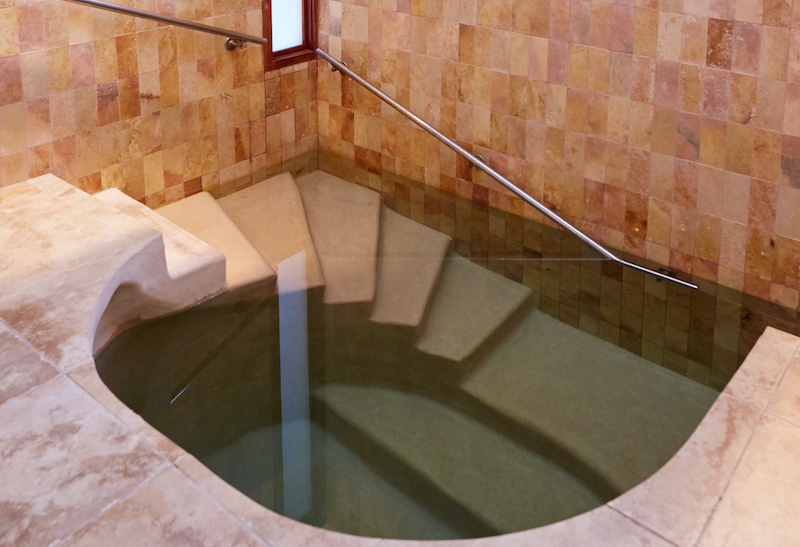 Sapphira Edgarde had been longing to immerse herself in a mikvah, or Jewish ritual bath, to mourn her stillborn daughter for years, but never quite felt ready. When she decided she was, the more traditional mikvahs near where she lives in South Florida were not open to her using the mikvah for that purpose.

Instead, she flew 1,500 miles to visit Mayyim Hayyim, a community mikvah in the Boston area known for the diverse community that uses it. She has siblings in the area, and the mikvah wasn’t the only reason she and her family, which includes two daughters, made the trip, but it was a big part of it, and the highlight, she said.

Since it was founded in 2004, Mayyim Hayyim has served as not just one mikvah, but as the leader of a movement dedicated to making practice of immersion more accessible. Its leaders have created rituals around the mikvah, trained guides and helped communities build their own. It’s this last aspect of their work that Mayyim Hayyim is focusing on now in a new way, with the ratification by its board of a new three-year plan that uses the Boston-based organization to lead growth internationally, Carrie Bornstein, the group’s CEO, told eJewishPhilanthropy. The work could cost as much as $5 million over a five-year period, Bornstein estimated.

“There is still a lack of understanding of the potential of mikvah,” Bornstein said. “I can see so clearly from my vantage point in Boston that we are a different city because of Mayyim Hayyim. It fosters a respect and a sense of pluralism in the community a Jewish identity that has a strong grounding.”

Immersion in a mikvah, which must contain a certain percentage of water derived from a natural source such as a lake or rain, was a common practice for both men and women before the destruction of the Temple in ancient Israel. The rabbis negated most of the laws after the Temple fell, but expanded those related to women and menstruation.

Most immigrants to the United States abandoned the ritual, but it remains an important part of Orthodox Jewish life, and some Jewish feminists have also reclaimed the practice. Mayyim Hayyim, the brainchild of Red Tent author Anita Diamant, is used by women for traditional purposes, but also by men and people of any other form of gender identity who wish to celebrate a joyful moment, mourn a difficult one or mark a transition like a conversion to Judaism.

“We don’t want people to have to come to Boston to feel like they can be their full selves at the mikvah,” Bornstein said.

At present, there are about 400 mikvahs in the United States, including 36 that are members of Mayyim Hayyim’s Rising Tide Open Waters Mikvah Network, in such communities as Atlanta, Cleveland and Scottsdale, Ariz. Three more are under construction.

Ohev Sholom, an open Orthodox synagogue in Washington, D.C., is in Mayyim Hayyim’s network, said Maharat Ruth Friedman, who purchased the organization’s ritual materials and makes them available in the mikvah’s dressing rooms. Her congregants, especially those struggling with infertility, use them, although some of the liturgy doesn’t comport with Orthodox norms.

Mayyim Hayyim is helping Beth Israel Congregation in Waterville, Maine, explore the possibility of building a mikvah in their basement. Conversations about it started over the summer at a virtual bagel breakfast, when the community realized that the synagogue’s founding family had a mikvah in its home, which had been torn down, said Rabbi Rachel Isaacs.

“At first I thought, ‘We can’t do this,’ but then I thought, ‘Wait, we are about to renovate the bathrooms,’” Isaacs said.

Six other communities are also working with Mayyim Hayyim to explore the possibility of joining the network. The number of new and aspiring mikvahs make the organization and its board believe that there could be much higher demand if Mayyim Hayyim had the resources to spread the word about it more widely.

The pandemic delayed action on the plan, the bulk of which was finalized before the coronavirus hit last spring. Mayyim Hayyim had already reopened on a limited basis, and now that vaccination rates are rising and public health regulations designed to mitigate the virus are being scaled back, the organization decided it was time to take it up again.

“The vast majority of American Jewry has no idea what I’m talking about when I talk about mikvah,” Bornstein said. “We need to explain what this thing even is and how it has the potential to change a community.”

To start this expanded outreach effort, Mayyim Hayyim plans to use the online resources it developed while closed during the pandemic, Bornstein said. It’s also using its virtual benefit, scheduled for May 11, to start a process by which it will educate the broader community by sharing more personal stories. Mayyim Hayyim will work to reach more people by deepening its relationships with existing partners, such as Moishe House and the Union for Reform Judaism, and creating new partnerships. It will seek more opportunities to speak at conferences and gatherings.

Because much of this work is an extension of what Mayyim Hayyim is already doing, the initial phase of the three-year plan requires only modest added expense, Bornstein said.

“One of the things that we’ll be working on is creating mikvah starter toolkits, with information on the nuts and bolts of how to actually do this thing,” Bornstein said.

The organization generates revenue from fees for its services and from grants that fund specific projects, like a clergy student mikvah fellowship that is supported by the Lippman Kanfer Foundation for Living Torah, Bornstein said. They have no multi-year unrestricted grants, but they do have an allocation from the Boston federation, Combined Jewish Philanthropies, which accounts for 2% of their budget, and received emergency support during the pandemic from the Aviv Foundation through the Jewish Community Response and Impact Fund.

Mayyim Hayyim has hired a new director of programs and partnerships who will seek that support, and the organization has already started to add board members who don’t live in the Boston area, Bornstein said.

“There’s been a lack of collaboration within the field itself,” she said. “We’re just at the beginning of this process. It feels like it’s an engine that’s hard to start, but once it gets going, it’s going to pop. We have nine conversions happening today.”

For Edgarde, the long journey was emotionally satisfying, and well worth it.

“I felt like I could be with myself. It was healing,” she said, adding, “If there was a place like Mayyim Hayyim that was closer, that would be easier.”