The tech, film and music festival in Austin includes a Shabbat dinner and events on antisemitism, Judaism and psychedelics and tzedakah 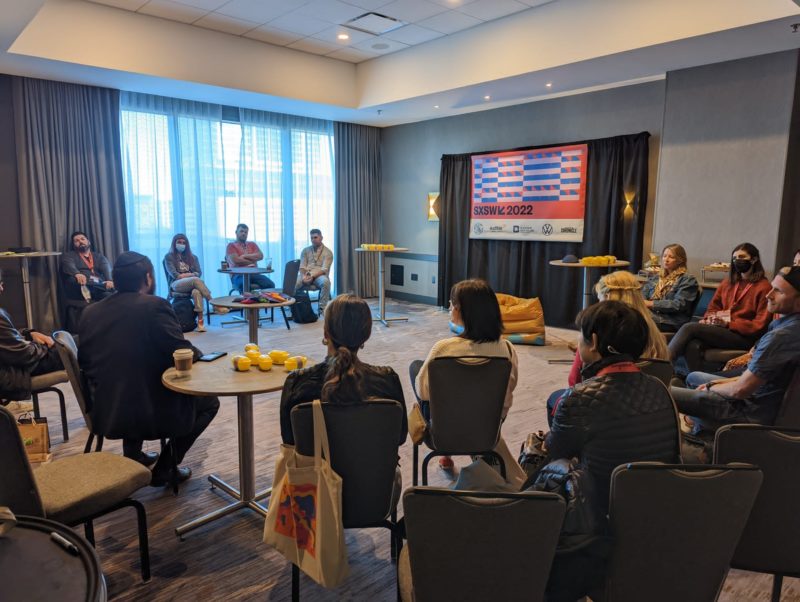 For the first time since 2019, the blockbuster South By Southwest (SXSW) festival has returned in-person to Austin where, beginning on Friday, hundreds of thousands of people will attend concerts, films and a gamut of panels. But on Friday night, at the Hilton Downtown Austin, one of the hottest tickets was to #openShabbat, a March 11  event where 400 people gathered, unplugged from the tech-centered festival and celebrated Shabbat together. The event was planned by Tech Tribe, the Brooklyn, N.Y.-based Chabad organization led by Rabbi Mordechai Lightstone and his wife, Chana.

The first #openShabbat was held in 2011, Lightstone told eJewishPhilanthropy, and has been back to SXSW every year since (with the exception of 2020, when SXSW was canceled due to COVID-19, and 2021, when Lightstone instead convened a digital event, complete with a challah bake and music, on a Thursday). In previous years, attendance had reached 300, and this year’s larger crowd was a mix of returning SXSW participants and new faces.

Danny Gold, a former journalist who recently moved to Austin to work in tech, said that Lightstone — whom Gold called ‘the tech rabbi’ — had invited him to the dinner so he could network and get to know some of the people in his new city, he told eJewishPhilanthropy. Gold recalled Lightstone’s “compelling and powerful speech about how — in an industry that has had some negative implications over the last 5-10 years, and with the toxicity that exists — to find and elevate the positivity.”

The event, which suggested a donation of $48, was organized in partnership with two other tech-oriented Jewish groups: OurCrowd, a Jerusalem-based investment firm, and The Kiddush Club NFT, a collection of Jewish-themed non-fungible tokens. The Israeli Jezreel Valley Winery provided wine, and OneTable, which facilitates Shabbat dinners for young adults, sponsored the food.

While previous SXSW festivals drew considerable Jewish content resulting in panels about online expressions of faith, digital community, Jewish and Israeli arts, and human rights advocacy — and despite the massive turnout for #openShabbat, the content at this year’s festival seems to have a less overtly Jewish footprint. A panel on Judaism and psychedelics is scheduled for Monday. And one panel featured ADL CEO Jonathan Greenblatt — author of the recent book It Could Happen Here — in conversation with journalist J.J. Goldberg about extreme political polarization.

“SXSW is a unique venue for engaging a wide audience far beyond the communal Jewish world and talking about issues that matter,” Greenblatt told eJP. “There’s so much energy here in Austin this week around the latest trends in tech like blockchain, NFTs, AR/VR and other topics, so I find it very encouraging that SXSW is prioritizing the fight against anti-Jewish hate and creating space for this critical conversation,” he added.

Second-time SXSW attendee Rachel Sumekh, the Persian Jewish founder of Swipe Out Hunger, which combats food insecurity among college students, returned to the conference to join a panel on that topic. “Food and pursuing higher education feel like two very Jewish things to me,” she told eJP. “It’s also Texas, so I met lots of people who don’t spend much time with Jews, or Persian Jews, at that. It’s such an open-minded place so it was a great chance to share first-hand about my religion and identity, because everyone really comes with a learning mindset,” she added.

On Sunday, the Lightstones ran a meetup focused on a new Chabad initiative known as ARK (which stands for “acts of routine kindness”). Lightstone said that the initiative distributes what is essentially a tzedakah box, shaped like Noah’s ark, “to teach people how creating a practice of giving every day allows you to create a foundation of goodness upon which to build the rest of your daily experience.”

Lightstone suggested that ARK’s message resonates among Jews and non-Jews alike, because it explores the role of giving, which he says is particularly important for people who work in tech and creative arts, more broadly.

“So much of what we do comes from us,” he said. “If our days are founded on good and kindness, that creates the foundation on which we base our lives, then the content we produce, apps we create, algorithms we make, [are] imbued with a platform of goodness throughout.”