Holocaust Survivor Day is meant specifically to celebrate the Jews who survived and to raise awareness for their needs as they age and their numbers dwindle. 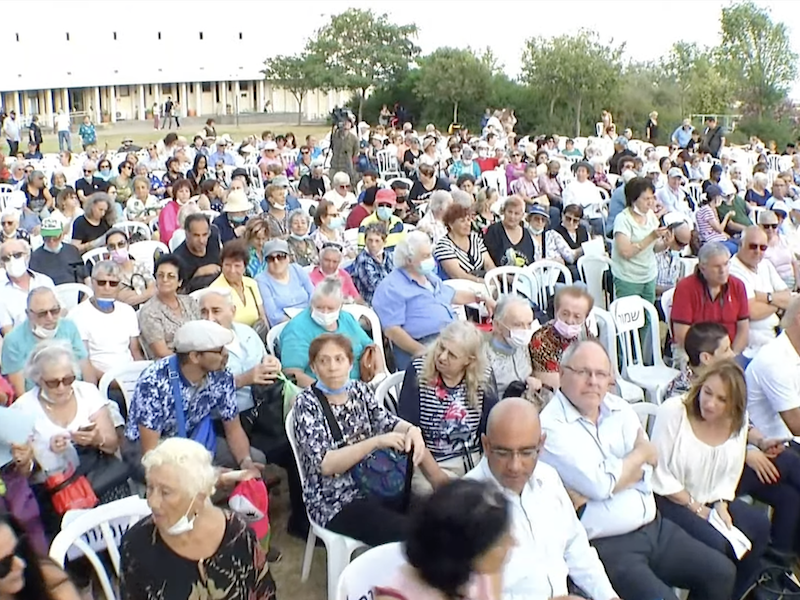 Attendees at a Holocaust Survivor Day event at the the Ghetto Fighters' House Museum in northern Israel on Sunday.

When she was 5 years old, in 1941, Ella Kagan was forced to leave her home in Moscow and flee east with her family across the Ural Mountains as the Nazis invaded the Soviet Union. Many years later, as she led a tour of the U.S. Holocaust Memorial Museum in Washington, she overheard teenagers denying it had ever happened.

“Oh, this is probably fake,” she heard the teenagers say. “It’s impossible. It didn’t exist. It is fake. It’s an American fake. It’s a Jewish fake.”

Kagan, now 86,  is the founder of the Shalom Education Center, a Russian-Jewish educational center in Rockville, Md. She is sometimes still haunted by nightmares of bombing, sirens and death. The experience of hearing teenagers deny the Holocaust, she said, drove home the conviction that traditional educational curricula teaching about the genocide are insufficient.

“The young generation, not only children, young adults, they are kind of educated, but it’s different,” she told eJewishPhilanthropy. “They know 6 million Jewish people were killed. OK, this is numbers…. They need to talk to real survivors. We have to share our memories.”

Kagan hopes that a series of events held yesterday, June 26,  the second annual Holocaust Survivor Day, were a step forward in that effort. Sunday’s events saw more than 1,000 survivors participate in ceremonies in Israel, Poland, Australia and several across the United States. Some events will also take place on Monday. As surveys show that large percentages of the millennial and Gen Z generations are unaware of the basic facts of the Holocaust, Kagan hopes the day provided people with the chance to listen to survivors’ stories so they could learn a basic lesson: “Do not kill,” she said. “Do not kill somebody Jewish. Do not kill Ukrainians or Russians. Do not kill.”

In contrast to International Holocaust Remembrance Day in January and Israel’s Holocaust Remembrance Day in the spring, Holocaust Survivor Day is meant specifically to celebrate the Jews who survived and to raise awareness for their needs as they age and their numbers dwindle. While 400,000 Holocaust survivors were estimated to be alive in 2019, according to the Conference on Jewish Material Claims Against Germany, that figure is decreasing. In Israel, for example, where precise records are kept, there are some 161,400 survivors, a decline of more than 15,500 since last year, and their average age is 85.

“We’re really at the end of the rope here with survivors, you know,” Mary Jane Rein, the executive director of the Strassler Center for Holocaust and Genocide Studies at Clark University, told eJP. “The war ended so many years ago. Anyone we’re talking about who is still living today, essentially, were child survivors or teenage survivors…. We say in the Jewish faith, may they live ‘till 120. We have a little ways to go if we’re going to have survivors live to 120.” She feels people need to have a “sense of urgency that if we’re going to do something we need to do it now.”

Rein feels Holocaust Survivor Day is akin to Mother’s Day. Just as mothers should be appreciated every day of the year, she said, so should survivors. But the day of commemoration places a special focus on them. “I don’t think anyone would disagree that we should be thinking of aging survivors on a regular basis and doing all that we can as a community to ensure that they are cared for and that they can live out their last years in dignity.”

Whether that goal is being met is a different story. According to Israeli reports, roughly a quarter of Israeli survivors live in poverty, while the number rises to a third in the United States, according to the Blue Card, a group that aids survivors in need. Rein believes people need to do whatever they can to raise awareness about the needs of survivors around the world. She recommended “making certain that their most basic needs, food and medicine, is being provided, and, in addition to that, just [paying] attention to the problem of loneliness.”

Holocaust Survivor Day is a grassroots initiative first launched in 2021 by the Jewish Community Center in Krakow, Poland, which chose June 26 because it’s the birthday of Marian Turski, a prominent Polish Holocaust survivor who is now 96. The JCC has since partnered with the World Zionist Organization, Seed the Dream Foundation, The Jewish Federations of North America and more than 60 other international partners. While last year’s inaugural event was mostly online, this year’s included many in-person events, including a marquee event Sunday at the Ghetto Fighters’ House Museum in northern Israel, and another being held on Monday morning at Habima Theater in Tel Aviv that will feature Israeli President Isaac Herzog and Diaspora Affairs Minister Nachman Shai. The Tel Aviv event will also feature a play titled “The Avengers: a Love Story,” based on the Jewish brigade that enlisted in the British military to hunt Nazis and their collaborators, and which fought in Italy in 1945.

“Holocaust Survivor Day is a day to recognize these survivors for doing exactly what they’re doing: for living, for surviving, for persisting, for teaching us the example of what it means to live a life of love, what it means to overcome hate,” said Shelley Rood Wernick, managing director for the Center on Holocaust Survivor Care and Institute on Aging and Trauma at The Jewish Federations of North America. “We have learned about many Holocaust survivors who have made absolutely incredible contributions to humanity… and I just want to highlight and celebrate them and also their peers who maybe don’t have the famous names, who are Holocaust educators, who are volunteers, and continue to painstakingly tell their stories, so that the world may learn and history not repeat itself.”

Rein worries that the world is not learning the Holocaust’s lesson — and that fear is backed up by data. A 2020 survey by the Claims Conference found that one in 10 Americans younger than 40 thought Jews caused the Holocaust, and only 37% knew 6 million Jews were killed.

“Is more awareness helping or is it hurting?” she asked. “I feel very pessimistic about the future unfortunately. And you think about it from the perspective of survivors; it must be so frustrating.”

But she sees hope in Holocaust Survivor Day. “Maybe just helping someone to get a good square meal and to have a conversation is the best that we can do,” she said. “Call a survivor or hug a survivor. Tell them that you’re thinking about them. And do that more than just on Holocaust Survivors Day. Do it on a regular basis.”