After nearly two decades of work, constant social media barrages, and millions of dollars spent, BDS has failed to make any discernible impression on Americans. These numbers are indisputable. A mere 5% of Americans express any degree of support for BDS, and only 2% strongly support the boycott movement.

The Scottish poet Andrew Lang once wrote, “Most people use statistics like a drunk man uses a lamppost, more support than illumination.”

It is tempting to use Pew Research Center findings on U.S. public opinion toward Israel in a similar way — to buttress a preconceived view rather than utilizing them to shed light on an open question. The common reaction to such data, both in the media and among the general Jewish public, is to be relatively pessimistic and emphasize the surveys’ revelation of negative trends. Yet in truth, an objective examination of the last two Pew surveys shows both reason for optimism and, even more importantly, a clear roadmap for facing the challenges ahead. 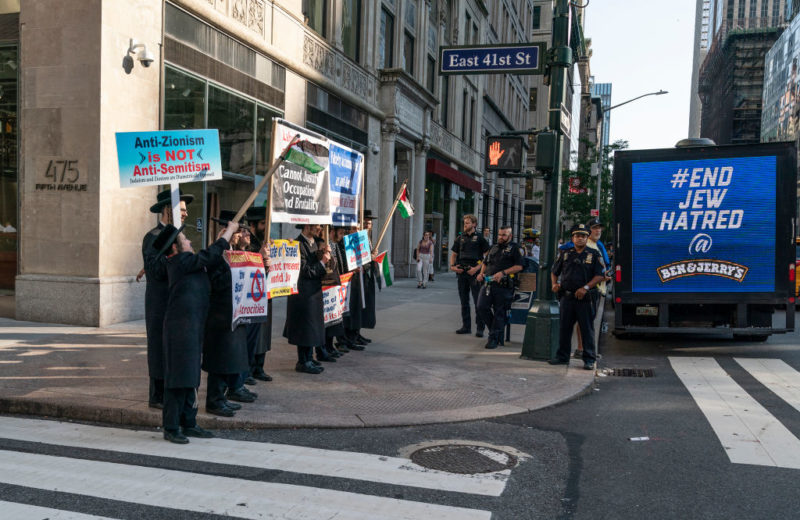 First, the good news. According to the study released last week — conducted in March 2022 among more than 10,000 adults in the U.S. — a strong majority of Americans continue to have positive feelings about the Israeli people. Two-thirds of respondents view Israelis favorably.

Perhaps most striking are the survey’s findings on the Boycott, Divestment and Sanctions (BDS) movement against Israel. In short, after nearly two decades of work, constant social media barrages, and millions of dollars spent, BDS has failed to make any discernible impression on Americans. These numbers are indisputable. A mere 5% of Americans express any degree of support for BDS, and only 2% strongly support the boycott movement. Eighty-four percent report that they have heard “not much” or “nothing at all” about BDS. Let’s be clear: We should not for one moment minimize the sinister influence that the ideas surrounding the movement pose. At the same time, we should consider taking a communal deep breath on the supposed power of a movement and some of the “half baked” efforts of its adherents like Ben & Jerry’s. The numbers are very clear that they have made almost zero impression on your average American.

We should ask ourselves why the movement that is so popular among a shrill and vocal minority has proven so unsuccessful. Although pro-Israel organizations should feel some rightful pride, including the Jewish Agency Israel Fellows program at more than 100 colleges and universities across North America, the truth is that our efforts would not be successful if we were seeking to promote an “apartheid state.” Rather, although your average American does not understand every nuance of the situation, he or she has made the decision that they have little or no interest in demonizing a true, if imperfect, democracy.

It is important to look at these numbers in the context of last year’s positive news from Pew report on Jewish Americans. The poll found that more than 80% of American Jews say caring about Israel is “essential” or “important” to what being Jewish means to them, and nearly 60% feel very or somewhat attached to Israel. At the time, I wrote that the pro-Israel Jewish community should take a step that many of its members are often reluctant to take — accepting good news. The same holds true, particularly regarding the new survey’s setback for the BDS movement. Once again, while it is important to acknowledge that the BDS threat remains alive and well, the Pew data has revealed that the movement exerts far less influence on the American public than many observers originally believed.

Yet, as was the case last year, challenges remain when it comes to public opinion toward Israel among the demographic younger Americans — trends which mirror the Jewish community’s own challenges vis-à-vis its younger members.

We cannot deny that there is also a growing partisan divide on Israel, as Republicans or Republican-leaning respondents hold more positive views of the Israeli people (78% very or somewhat favorable) than of the Palestinian people (37%), while Democrats and Democratic-leaning independents hold about equally positive views of Israelis and Palestinians (60% and 64% favorable, respectively).

Yet none of this means that we should accept this sentiment as a fait accompli. We must use every resource to counter this deteriorating support for Israel among young adults in a way that transcends the partisan divide. We must show the younger generation the real Israel — including its diversity, culture and society, economy, food, and perhaps most importantly, its people.

Masa Israel Journey has since 2004 brought more than 160,000 young adult participants from more than 60 countries to Israel for a duration of 4-12 months at a time. Participants immerse themselves in an in-depth and authentic experience of the Jewish state, in which they live in Israel like a local and work to grow both personally and professionally. Once they complete the program, Masa alumni become de facto ambassadors for Israel across the globe.

For those who cannot spend a substantial amount of time in Israel or travel there at all, The Jewish Agency’s Shlichim (Israeli emissaries) bring Israel-centric educational and social programming to Jewish communities in North America and worldwide. This includes the ShinShinim, Israeli high school graduates who delay mandatory service in the Israel Defense Forces and serve global Jewish communities for up to 10 months. The number of ShinShinim in the Jewish world has more than quadrupled in less than a decade.

Of course, this challenge is bigger than any one organization, and we are pleased so many Jewish organizations are looking at new and innovative ways to connect with many more young people in our community.

Pew’s findings on public opinion toward Israel have once again underscored the parallel challenges and opportunities for American Jewry. It is now up to us to capitalize on the data.