For professionals at Jewish LGBTQ groups, as well as Jewish security organizations, the Colorado Springs attack drove home the similarities between the dangers each community faces. 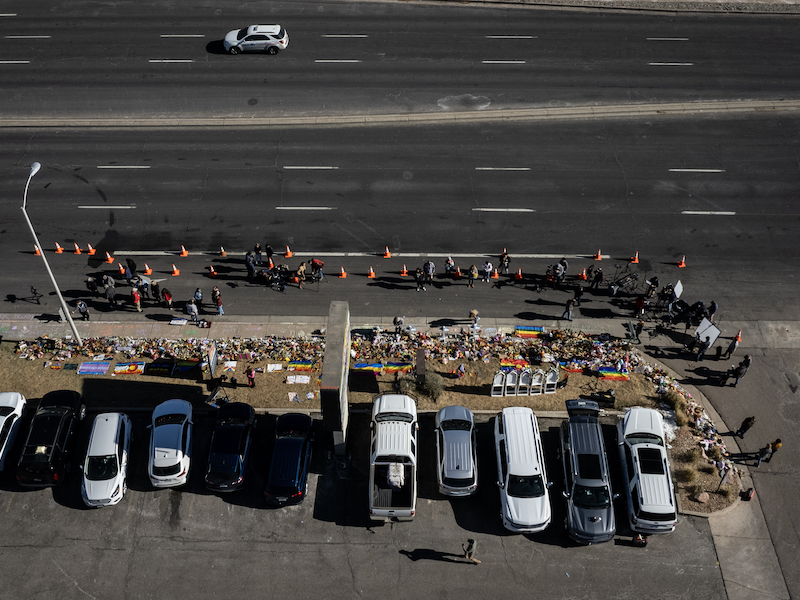 An aerial view of mourners gathering on Tuesday at a memorial for the victims of the shooting at an LGBTQ club in Colorado Springs, Colo.

When they heard of the deadly shooting at an LGBTQ nightclub in Colorado Springs, Colo., on Saturday night, the news sent the employees of JQ International reeling — and strategizing about how they would secure their own events, including an upcoming Hanukkah party.

The feeling of fear, danger and uncertainty wasn’t foreign to the staff of JQ, a Jewish LGBTQ group based in Los Angeles. In the last few days, every JQ employee had received hate mail saying that their lives were disgusting and that their work was inherently wrong.

“We have always felt vulnerable, but just as the Jewish community is feeling increased vulnerability around antisemitism, we are feeling increased vulnerability around our safety and our security and the sanctuary of our spaces,” Asher Gellis, JQ’s founder and executive director, told eJewishPhilanthropy.  Shana Gee-Cohen, the group’s chief development officer, added, “There’s not been one moment where we haven’t worried about if someone’s going to come into our space and murder us.”

For professionals at Jewish LGBTQ groups, as well as Jewish security organizations, the Colorado Springs attack — in which five people were killed and 18 injured — drove home the similarities between the dangers each community faces. The attack came soon after concrete threats of violence to synagogues in New Jersey and New York. At the same time, security officials said that different spaces may require different solutions.

“Some of these hateful conspiracy theories accuse Jews of promoting homosexuality or the so-called ‘LGBTQ agenda,’ while others falsely claim that trans people are pedophiles,” Shira Goodman, director of campaigns and outreach at the Anti-Defamation League, told eJP. “Many extremists are both antisemitic and anti-LGBTQ+. So, we share unique challenges. One difference we have seen is that Jews have been targeted in their places of worship, while most LGBTQ attacks target social venues such as clubs. But regardless of the location, all are hate crimes and should be treated as such.”

Days before the shooting at Club Q in Colorado Springs, the ADL and LGBTQ media advocacy organization GLAAD announced a new partnership to counter anti-LGBTQ extremism and hate in the United States, which has motivated thousands of hate crimes during the past several years, according to the FBI. The ADL is routinely in touch with partners in the LGBTQ community around these issues, Goodman added: After the attack, the Community Solidarity and Safety Coalition, a group co-founded by the ADL to address security concerns across minority groups,  expressed sympathy with the LGBTQ community and urged collective action to support it. Of the coalition’s 25 members, two are LGBTQ organizations – GLAAD and the Matthew Shepard Foundation – both of which contributed to the coalition’s statement in the attack’s aftermath.

“Minority groups, including the LGBTQ community across America, have seen an uptick in serious acts of hate, and we need to stand with each other to push back on it,” Evan Bernstein, CEO of the Community Security Service, which trains volunteers to patrol synagogues, told eJP. “We feel that vulnerable communities should train themselves on how to protect themselves and how to identify threats.”

Michael Masters, CEO of the Secure Community Network, which coordinates security for Jewish institutions, said that collaboration was essential.

“SCN has long not only shared the materials and trainings that we have developed on behalf of the Jewish community to other threatened and/or marginalized communities [but also] proactively worked to support them,” Masters said. He recommended collaboration “on everything from situational awareness to dealing with an active threat… Sadly, all courses that play a role in the types of events we tragically saw impact the LGBTQ+ community this past weekend.”

“Primarily, we focus on providing situational awareness training to all groups across the state at no cost, focusing on security concerns as they arise,” Leshem said. “We emphasize that these trainings are beneficial whether one is shopping in a grocery store, attending a concert, being on the grounds of a school or university, going to the movies, or being in a bar. Time and again, we have seen how training and awareness can prevent or at least mitigate loss of life.”

Years ago, JQ International didn’t necessarily have security at all of its events. That changed after the 2016 Pulse nightclub shooting in Orlando, Fla., which killed 49 people, and the Tree of Life synagogue shooting in Pittsburgh two years later, in which 11 worshippers were killed.

“The emboldened hatred, racism, antisemitism, homophobia and transphobia have gotten out of control, and we have to continue ramping up our security,” Gee-Cohen said.

That includes vetting multiple security firms to provide services or to source consultants, and raising funds to support the organization, which has a budget of $749,000, to put the needed security in place. JQ’s plan includes holding a town hall-style meeting to share ideas about increasing security with constituents and get their feedback, engaging them in the process as it happens. Gee-Cohen added that, just as synagogues are spiritual spaces for the Jewish community, spaces like queer clubs and organizations act as sanctuary spaces.

In addition to the physical security threat, Jewish LGBTQ leaders said contending with both antisemitism and homophobia takes a mental toll. JQ International has a phone helpline available to people who are seeking support, and recently hired a wellness director and a trained clinical staff that run support groups and urge allies to recommend the hotline to people who need it.

“For LGBTQ+ Jews, feeling fear and vulnerability is all too familiar,” Idit Klein, CEO of Keshet, a Jewish LGBTQ group, told eJP. “Yet each time we experience an attack fueled by homophobia, transphobia or antisemitism — sometimes all at once — the fear feels newly raw… Our task as a community is to find ways to mourn and care for one another while persisting in our collective fight for a world in which we can all live in safety and dignity.”

Some members of both communities feel particularly vulnerable. More than a third of JQ International’s constituents identify as Jews of color, and about 15-17% identify as trans and nonbinary, according to the group’s figures. Gee-Cohen hopes people across demographics take action to support her community, but she also understands that her group needs to protect itself.

“We need to really take a stand around resiliency, that we need to be strong, we need to be prepared, but we also need to be vigilant,” Gee-Cohen said. “We’re not naive. A lot has changed in our generation. And if we sit here and just say, ‘it’s just a one time thing; it’ll never happen again,’ we’re kidding ourselves.”