New Jersey Attorney General Matt Platkin said, “I continue to see that fear in communities across our state, because the reality is, hate hasn’t gone away in the three years since that awful day” 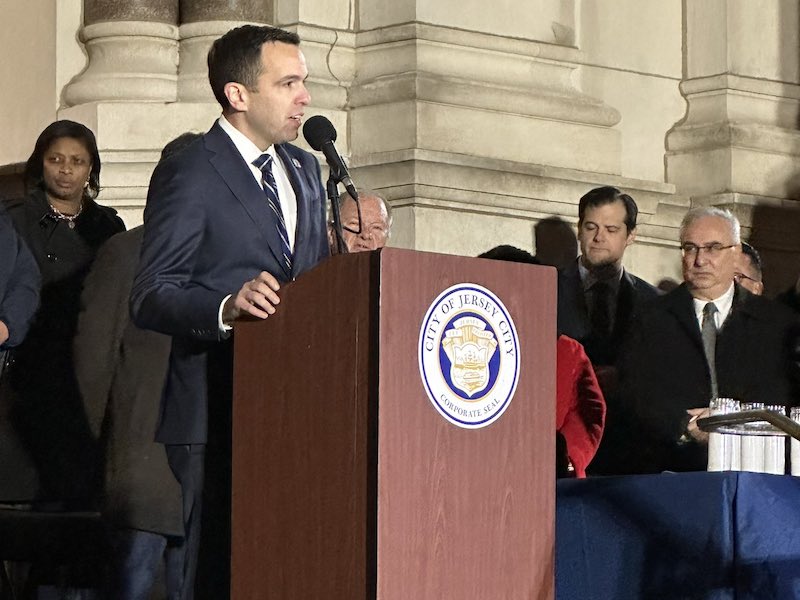 Courtesy of the ADL

New Jersey Attorney General Matt Platkin speaks at a commemoration of the 2019 Jersey City shooting at a kosher supermarket.

More than 100 people gathered at the steps of City Hall in Jersey City on a chilly Thursday evening to pay tribute to the four victims of the shooting at a kosher supermarket three years ago. But along with serving as a memorial to the fallen, the event functioned as a warning that, when it comes to threats against Jews, matters do not seem to have improved.

“I have the privilege of welcoming you to Jersey City City Hall today, unfortunately not under the best of circumstances,” said Mayor Steven Fulop, who is Jewish, though it was unclear if he was referring to the 2019 shooting or the rising numbers of antisemitic incidents since.

Speaking later in the evening, state Attorney General Matt Platkin said, “I continue to see that fear in communities across our state, because the reality is, hate hasn’t gone away in the three years since that awful day.”

In addition to Fulop and Platkin, the hour-long service featured New Jersey First Lady Tammy Murphy, Israeli Deputy Consul General Israel Nitzan and a senior official from the Newark FBI office. The event was organized by the Anti-Defamation League, the Jewish Federation of Northern New Jersey and the Israeli-American Council.

“Together, we must find the courage, through enduring pain, to end the twin evils of gun violence and bigotry,” Murphy said, and invoked the upcoming holiday of Hanukkah in her “hope for the future that light will always overcome darkness.”

One group that didn’t have representation at the podium was the Haredi community of Jersey City, which was targeted in the attack, though some of its members stood on the steps next to the speakers. Chesky Deutsch, who lived in the Jersey City community at the time of the shooting, told eJewishPhilanthropy that community members are generally reluctant to speak at public events such as these.

“It was a beautiful and appropriate event,” Deutsch told eJP. “The reality is that the community here specifically — the Orthodox, Haredi community — wishes to be just by themselves. For good or for bad, they’re not here to be in the public sphere.”

The one Hasidic rabbi to speak from the podium was Rabbi Moshe Schapiro, who heads Chabad of Hoboken and Jersey City, and read a passage from the Mishna before reciting the Rabbi’s Kaddish, the form of the prayer that is recited following Jewish learning. The passage he chose, from the final chapter of Tractate Oktzin, says God “found no vessel that could contain blessing for Israel save that of peace.”

The crowd was diverse and included young and old attendees, including a group of students who held signs with messages such as, “Stop hate” and “Violence is not the answer.”

Scott Richman, the ADL’s regional director for New York and New Jersey, called in his speech for the government to ensure that Rodriguez’s widow gets permanent status in the United States. He also said that, by some measures, antisemitism has “simply gotten worse since 2019.”

“ADL’s annual audit of antisemitic incidents showed that 2019 was the highest year on record,” he said. “That was far outdone by 2021… What I am sure is not news for this crowd is that 2022 is no better. I can tell you quite honestly that my staff is literally overwhelmed as we speak, responding to multiple antisemitic incidents every day of the week.”

Speaking to eJP before the event, Richman said the long-term answer to historically high levels of anti-Jewish hate lies in education. “History, math, reading, science [are] all very important, but so is helping students to understand their own identity and respect the identity of others,” he said.