In addition to bringing Israeli features to Hollywood, the festival hopes to familiarize audiences with a new side — or multiple sides — of Israel. 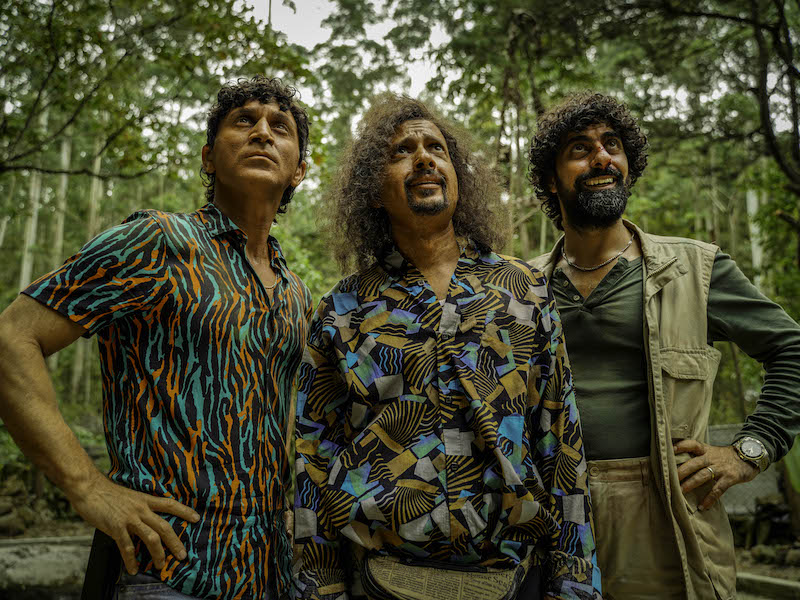 Courtesy of the Israel Film Festival

A frame from the runaway comedy hit "Saving Shuli."

Ten years ago, few might have suspected that dramedies about Religious Zionist and Haredi Jews in Jerusalem — or a nail-biter about Israeli commandos in the West Bank — would become mainstream hits in the United States.

But one film festival in Los Angeles hopes to give exposure to more Israeli screen productions, with the hope that some may follow in the footsteps of “Srugim,” “Shitsel” and “Fauda,” and catch the eye of Hollywood producers.

The 35th annual Israel Film Festival, which began last week and is running in person and online through May 26, will screen 32 movies and TV shows, from “Greener Pastures,” a comedy about a retired widower who becomes a cannabis dealer, to “Plan A,” a drama about a group of Jewish vigilantes that aims to avenge the 6 million Jews killed in the Holocaust by killing 6 million Germans.

In a nod to the recent popularity of Israeli TV, the festival will also screen episodes of Israeli shows, including the spy thriller “Tehran.” The historical dramatic series “The Beauty Queen of Jerusalem” will premiere at the festival’s closing night, a day before it starts streaming worldwide on Netflix.

The festival’s founder, Meir Fenigstein, says that in addition to bringing Israeli features to Hollywood, the festival hopes to familiarize audiences with a new side — or multiple sides — of Israel.

“What the festival is about is to learn and to be educated culturally — and not just culturally, I think — what’s going on in Israel, so films are the best ambassador of Israel,” Fenigstein told eJewishPhilanthropy. “With the success of ‘Fauda,’ [which streams on Netflix] and ‘Tehran’ [on AppleTV+], the competition is very big.”

Fenigstein has his own unimpeachable Israeli cultural bona fides as the drummer for Kaveret, a popular and pioneering Israeli rock band that formed in the 1970s and last played a reunion concert in 2013. Fenigstein’s nickname, “Poogy,” also served as the occasional name of the band, and in a cinematic crossover, he and his bandmates appeared in the 1978 Israeli film “Halahakah” (The Troupe), about an entertainment unit of the Israeli army.

Over the years, his festival has brought 1,100 feature films, documentaries, television dramas and short films to nearly a million filmgoers, and brought hundreds of Israeli filmmakers to the U.S. to share their art. This year’s offerings include in-person and online screenings; to maintain the Los Angeles feel in the virtual space, content is  available only to customers who live in Southern California.

For Israeli actors and creators whose work is spotlighted in the festival, it’s a Hollywood exposure opportunity, Fenigstein said, adding that Hollywood wants to produce high-quality films and series, something Israel’s TV market has proven able to do on a budget that’s a fraction of most major Hollywood productions. Israeli film and TV producers are also looking for co-production partners and investors from Hollywood, who can give their content a bigger launchpad.

Along with finding a platform on Netflix and other streaming services, Israeli TV is getting a spotlight at the festival. In addition to concluding with “The Beauty Queen of Jerusalem,” the festival includes episode screenings of “False Flag,” a drama that was adapted as the recent AppleTV+ series “Suspicion,” and “Tehran.”

One of the festival’s centerpieces will be a symposium about the impact of Israeli television, and the festival will honor Hagai Levi, the co-creator of the series “In Treatment,” which was picked up by HBO. Levi has gone on to create series such as “The Affair,” ”Scenes from a Marriage” and “Our Boys,” a miniseries about the kidnappings that preceded the 2014 Gaza War.

“There’s more international content than ever before and Israel is part of that,” Shayna Weiss, associate director of Brandeis University’s Schusterman Center for Israel Studies, told eJP. “I also think, for Western audiences, Israel is familiar and different, which is the perfect combination, especially as the world globalizes. There are plots that work in multiple cultures — whether it’s terrorists and fighting, or epic love stories.”

The festival operates through the IsraFest Foundation, a Los Angeles-based nonprofit with a budget of about $1 million. Last year, for the first time, the festival received aid from California’s state government.

“The support for this was a nice booster for me, personally, that California recognized that the festival is important for Los Angeles culture,” Fenigstein said.

He added, “This year, we have the largest support from the community.” The festival is being co-chaired by the heads of the publications Variety and Deadline, along with Oscar-nominated Israeli producer Arnon Milchan serving as honorary chair. Its sponsors include the family of producer David Wiener, Israel and Molly Weinberg; Miriam Adelson’s family foundation; Hanna and Bernie Rubinstein; and Lendistry, a women- and minority-led lender.

In addition to “Greener Pastures” and “Plan A,” Fenigstein is particularly excited to screen  “Saving Shuli,” a breakaway hit that shattered Israeli box office records: the film features the comedy trio Mah Kashur on a rescue mission to Colombia. “Saving Shuli” sold a million tickets last summer; Fenigstein said it offered audiences a return to laughter and community during the pandemic.

“This film had a first-time director with three Israeli comedians, and…  this is one of the three most [highly] grossing films in the last 74 years of the State of Israel,” he said. “It’s unbelievable. People went to see it three, four, five or more times. Wow.”

He added, “For $10 you go [to the theater] and you hear, around you, people laughing. That’s what people wanted to hear, because they were all the time at home [during the height of the pandemic].”

Fenigstein hopes to create the same sense of community at his festival. He told eJP that advance ticket sales are good, but acknowledges that — due to the pandemic, shifting theater-going habits and the increased availability of Israeli content on streaming platforms — one of the unknowns of this year is if people will actually show up at the box office and buy tickets. The festival ran digitally last year and attracted approximately 8,000-10,000 people. This year, in person, he expects around 5,000.

“The experience in a movie theater basically got lost,” he said. “I don’t know how and what we have to do to bring it back. Maybe the festival will suffer from that too. We’ll see.”