GatherDC, which aims to connect young Jews, expands to the Bay Area

GatherDC began more than a decade ago in the nation's capital as a way to connect young Jewish adults with the programs that serve them. 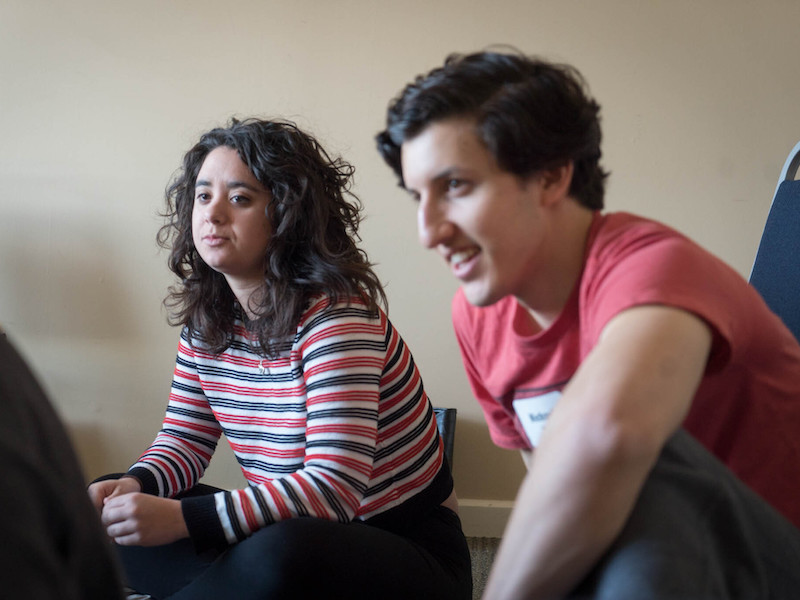 Caroline Kessler, 32, has been a resident of San Francisco’s Bay Area for nearly a decade, and remembers what it was like to be the new person in town. When she arrived, she knew some locals from college, and connected with independent Jewish spiritual communities as well as  earth-based Jewish organizations.

But as she got settled in the area, she realized how hard it was to keep track of all the programs she might be interested in.

“It can be very challenging to not only understand what’s going on, but just literally to hear about events,” she told eJewishPhilanthropy, noting that a person may have to subscribe “to like 20 different newsletters to know what’s going on at Moishe House, or what’s happening at this synagogue that you may or may not be interested in going to.”

Now, Kessler is the community director for GatherBay — an offshoot of the Washington, D.C.-area organization GatherDC — and aims to change that. The initiative has a budget of $1.2 million over three years.

“Part of the role that Gather hopes to play in the ecosystem, or ideally will play, is being that connector and disseminator of information so that people not only can find their place, but understand what are the opportunities and the options here,” Kessler said. “This interpersonal, concierge-style approach is more than just sending someone a link. It’s about connecting with a group of people who are also interested in checking something out and meeting up to go together.”

The Gather model emerged from the nation’s capital in 2011, when a group of young adults got together to share information about and attend Jewish events. In 2016, that evolved into the nonprofit GatherDC, which now has an annual budget of $850,000 and 12 full-time employees. Today, more than 100,000 people use the group’s online resources every year, and it has a mailing list of more than 12,500 young adults across greater Washington. Of those, more than 11,000 community members have been engaged with Gather staff or experiences over the past six years.

GatherDC founder and CEO Rachel Gildiner told eJP the organization tries to build community in three ways: hosting something people can come to; connecting people to events; and connecting people to each other. GatherDC hosts a monthly happy hour that serves as a meeting place for young Jews, as well as education sessions, alternate holiday commemorations and retreats.

“What we know to be true is that people are always looking for other people, they are looking to connect,” Gildiner said. “It’s the organic networks that help the community feel connected that [are] really often missing, [making] people feel isolated and alone.”

According to last year’s Pew Research Center study of  American Jews, younger Jews are about as likely as their older counterparts to say being part of a Jewish community is an essential part of being Jewish, but only 39% are likely to say they feel a great deal of belonging to the Jewish people, and a similar percentage says that being Jewish is very important in their lives. While there is no lack of local and national young adult-centered programs — such as Moishe House, which provides spaces where young adults can connect with peers, or OneTable, a platform that brings young adults together around Shabbat dinners — someone who’s new to the community may have trouble finding them.

Zvika Krieger, spiritual leader of the independent spiritual community Chochmat HaLev in Berkeley, Calif., is excited for GatherBay’s potential to bring new participants to the community. “People who never felt like they belong are now getting matched with communities that feel like home, where they don’t have to leave parts of their identity or their values at the door,” he told eJP.

“We have heard from young Jews that they want to feel empowered around their spiritual lives,” he added. “They don’t want someone to tell them what to do, they want to explore the sources themselves and put their own spin on rituals and practices, deeply rooted in tradition but relevant in the modern world.

The Gather model works in Washington, D.C., via personal attention to the needs of young Jewish seekers: Staff and volunteers connect with individuals to find out what they’re looking for and then match them with people they might want to meet and activities — many of them part of the already robust slate of offerings for young adults — that they might want to try. Gather is also “redefining the concept of partnership,” Gildiner said, beyond putting multiple logos on the same flyer for a co-sponsored event  and moving toward deeper and sustained relationships with local organizations.

“We see ourselves, genuinely, as partners to all of the organizations that are trying to serve [Jews in their] 20s and 30s,” Gildiner said, including Moishe Houses, OneTable, Hillel, federations and synagogues, among others. “It takes time to build the trust of other organizations, and to say, we’re not here to do what you’re doing, we’re not here to take your people. If Gather is doing its job, more people will find out about Moishe House, OneTable, [the Jewish environmental and farming organization] Urban Adamah…we want to connect people to the things that exist.”

After a five-year impact study, the GatherDC team realized their model could be scaled to other metropolitan areas and began doing consulting work, including training young adult “connectors” — each representing a young adult organization —in a project through the San Francisco Federation. Through that project, they connected with the Rodan Family Foundation, which is based in the Bay Area and whose representatives “really believe in this peer to peer model,” Gildiner said.

Kessler is also a veteran of other grassroots Jewish initiatives, including Ashreinu, an egalitarian minyan in St. Louis, Mo., which she co-founded, and has consulted for organizations in the Bay Area. She was most recently storytelling and editorial manager at UpStart, which provides training, resources and networking to early- and growth-stage Jewish groups.

Now about a month into her job, Kessler is following the Gather model, meeting with young adult community members who are connected or not-so-connected to Jewish life, as well as with with community partners, she said, “to really hear what people are craving, what they think exists already, what they’ve been enjoying going to, and what they might find, is perhaps missing in the landscape.” The East Bay — which includes Berkeley and Oakland — has the largest number of Jewish households in the greater Bay Area, including a large and growing group of young adults and young families, Kessler told eJP.

Conversations Gildiner and Kessler are having with Ilana Kaufman, the executive director of the Jews of Color Initiative, are helping to ensure that a diversity, equity and inclusion lens accompanies the Bay Area expansion from its start, they told eJP.

“We’re starting a little more quietly or organically, really listening to the community, and building those relationships, understanding where the gaps and needs are,” Kessler said. “There’s already such abundance here, there’s many, many organizations that have been doing work in the East Bay for years,” she added, as well as “informal initiatives that I’m trying to map and understand in the landscape. We want to really lift up what already exists and plug people into that, as well as find where those gaps might be.”

Nationally, Gather, Inc. will continue to develop resources and initiatives that any community can utilize to engage young adults, young families, and other demographics in Jewish life.

“Our plan for the next three years is not to be in 20 cities,” Gildiner said. “Our plan is to learn from the communities that we are in, make sure that they are set up for relational and ongoing excellence. And then, and only then, make decisions about where else we might be.”