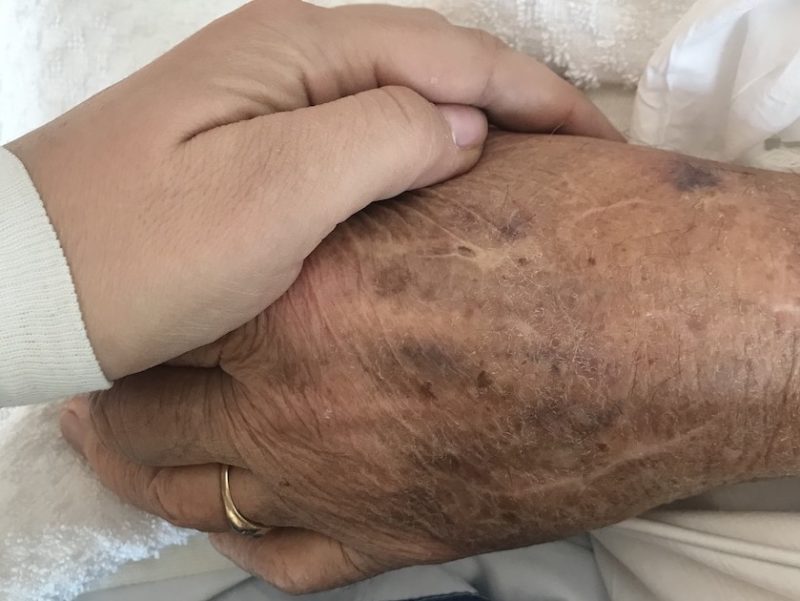 As Sarah Gould Steinhardt’s grandfather lay dying in January 2018, the family knew that medical professionals were taking the best possible care of him physically. But they had nobody to help him — or them — with spiritual matters. “We were all in the hospital every day, all day, all night. And nobody knew what to do from a Jewish perspective,” Gould Steinhardt said. Months later, while on a trip to Israel with Natan, the giving circle of which she is a member, Gould Steinhardt was still thinking about those feelings of confusion and loss. She began to discuss them on a hike with Felicia Herman, then Natan’s executive director, who’d had a similar experience with an uncle. The two women began to realize that many people probably had the same difficulty thinking about and planning for death in a Jewish way, and that Natan could address those challenges. “There is and has been for so long such a taboo in talking about what your own personal end of life might look like. But not talking about it, it becomes even scarier,” Gould Steinhardt told eJewishPhilanthropy in a conversation about the origins and plans of the Shomer Collective, the Natan-incubated project that aims to support both Jewish professionals whose work involves death and the individuals seeking Jewish wisdom on the subject.

In July 2018, the women invited other Natan members to join them in a year-long course of study about death and dying, facilitated by Rabbi Melanie Levav, who had just been ordained by the Jewish Theological Seminary. The initial meeting used the Jewish edition of the Death Over Dinner book, the primary tool of an international movement started in 2013 to encourage such conversations. Levav had worked in the Jewish community her entire career, including a formative stint as a social worker in the Russian-speaking community in South Brooklyn, where she worked with a family that couldn’t tell a father that his daughter was dying until after she was gone because they were so afraid to talk about death. This and similar experiences inspired her to apply to rabbinical school. “I wanted to talk about death and dying grounded in Torah,” she said.

The project was sponsored by NatanLab, the group’s incubator. After that first year, Natan, which was co-founded by David Steinhardt, paid a consultant to assist Levav in developing and positioning it as an independent organization. It gained nonprofit status through fiscal sponsorship by the FJC: A Foundation of Philanthropic Funds and was given its name. The word “Shomer,” or guard, in the name of the collective is a reference to the person who watches over a Jewish body between death and burial. “Just as a shomer accompanies a Jewish soul, we are going to accompany people as they explore how they want to live in the face of death,” Levav said. The coronavirus pandemic made the Jewish community more receptive to the Shomer Collective as it began to take shape, but the need for it predated the virus, said both Gould Steinhardt and Levav. “We’re not the first generation to deal with a pandemic and a plague, there’s a lot of Jewish wisdom about this, but we’re not talking about it,” Levav said.

The collective is now building its board, whose current members, including Gould Steinhardt, participated in the Death Over Dinner conversation and the study sessions that followed. The Lippman Kanfer Fund for Living Torah provided a grant to support the collective’s launch, and the Sephardic Foundation on Aging has also made a “significant” grant, Levav, who started her job as the collective’s full-time director less than a month ago, said.

One of Levav’s first tasks is the hiring of a staff member who will create a formal network of the varied Jewish organizations that touch on or are adjacent to issues surrounding death — burial societies, hospice providers, chaplain associations and nursing homes. Until now, there has been no entity that brought them all together to learn from and support each other, said Rabbi Sara Paasche-Orlow, director of spiritual care at Hebrew SeniorLife, a group of elder care and rehabilitation centers in the Boston area. The lack of such structure is symptomatic of discomfort with death in society generally, and in the Jewish community, she said. “We need a home for folks doing this work and a sense that we’re a community in this together,” she said. “It will help the people we serve.”

Part of the mission of the Shomer Collective — which will not take any positions on issues of theology or practice — is to create and curate content and use the internet to broaden access to the range of Jewish resources on death and dying. Levav hopes to increase its reach through a partnership with the EOL Collective, a website launched this past August by RoundGlass, the wellness and spirituality company that has absorbed the Death Over Dinner movement. The Shomer Collective will supply Jewish material to EOL — which stands for end of life — such as texts, commentaries and directories of service providers. “I hope that when people need help, they can go to Google and Shomer Collective will come up,” Gould Steinhardt said.