Topics for the fellowship include “Where do Sephardic Jewish Americans fit in Diversity, Equity, and Inclusion (DEI)?” and “Sephardic Jews as an Intersectional Bridge." 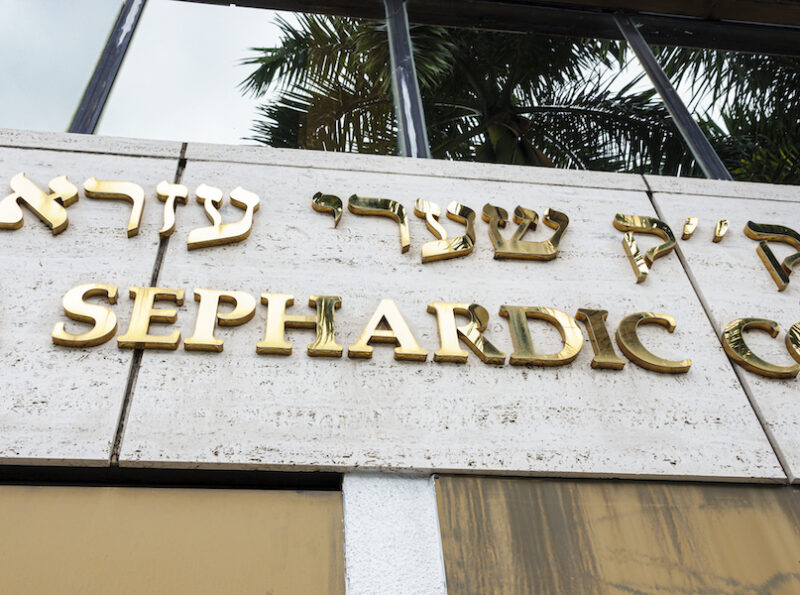 The facade of a Sephardic synagogue in Florida.

The Sephardic Leadership Institute (SLI) has started running the first national cohort of its Sephardic Leaders Fellowship, a six-month program to help support and build a network of Sephardic and Mizrahi Jewish professionals.

The fellowship will “provide lectures and talks and discussions about issues pertaining to Sephardic, Mizrahi Jews, the Jews in general – but specifically through a Sephardic lens,” Ty Alhadeff, SLI’s director, told eJewishPhilanthropy.

Topics for the fellowship include “Where do Sephardic Jewish Americans fit in Diversity, Equity, and Inclusion (DEI)?” and “Sephardic Jews as an Intersectional Bridge,” as well as antisemitism and Jews from the Middle East and North Africa in Israel.

The institute, launched in July with funding from the Jewish Community Response and Impact Fund (JCRIF), a coalition of Jewish funders that came together at the beginning of the pandemic, is a project of Jews Indigenous to the Middle East and North Africa (JIMENA), a Bay area nonprofit that aims to educate about Sephardic and Mizrahi Jews. SLI’s focus on DEI comes after JIMENA successfully lobbied for Jews to be included in California’s Ethnic Studies model curriculum, which the state adopted last year.

The fellowship program was piloted last year as a local initiative between JIMENA and The Jewish Community Federation and Endowment Fund to connect Bay Area professionals and increase Middle Eastern and North African representation in Jewish organizations.

Now, Alhadeff hopes that the national scale of the program – with 20 participants across 10 states (and Toronto) – will create stronger educational opportunities for Jewish professionals. For example, Alhadeff points to what participants might learn from his native Seattle, where a Sephardic community has thrived for more than 100 years, about how to represent Middle Eastern and North African Jews in smaller communities.

“It’s been interesting to reach out to people across the country [who] don’t really have the institutional framework, and to see how communities like Seattle might be able to offer guidance,” Alhadeff said, with different lessons to take from the sizeable Syrian Jewish community in New Jersey or the Persian Jewish community in L.A.

Though the fellowship uses the terms Sephardic and Mizrahi, participants come from a range of backgrounds that don’t fit neatly into any one definition, like Carribean Sephardic, Bukharian, and Arab-Jew.

“Who likes using the term Mizrahi? Does that include people that are in the Maghreb in North Africa?” Alhadeff said, using the Arabic term for northwest Africa while relating some of the questions raised in the fellowship. “How far does the East go? Does that include the Bukharian Jews? So these are all good questions.”

Some fellows are Ashkenazi, and were accepted because they work at Sephardic organizations like The Sephardic Foundation on Aging. “They want to make sure that Sephardic culture is being represented within the institutions, whether or not they’re actually Sephardic themselves,” Alhadeff said.

The SLI will also be running the fellowship for a cohort of campus professionals beginning in February. Alhadeff sees the program as another way to educate Jews more broadly on a variety of issues, with Sephardic and Mizrahi Jews having much to offer the predominantly Ashkenazi North American Jewish community. He hopes fellows will help their organizations implement more Sephardic content, and give Sephardic views more prominence in  organizations such as Hillel International and the pro-Israel group StandWithUs.

“Whether it’s on topics of antisemitism, or being a persecuted minority, or relationships to Israel, it might be interesting to learn from Lebanese Jews or Iranian Jews, or the Jews from Istanbul, who had, let’s say, 500 years of relative stability compared to the rest of the Jewish landscape,” Alhadeff said.