After 18 months in bankruptcy and pandemic-induced closure, the museum is being reborn

I’ve always wondered if the phrase “New Beginning” was tautological, like the phrase “very unique.” But this time of the year, during the Jewish High Holidays of Rosh Hashanah and Yom Kippur, it is tradition to begin anew. Jews are called on to examine our past, reflect on our actions, our interactions, our relationships, and ourselves, and prepare for a fresh start. If our name is chosen to be written into the Book of Life—we will be chosen to live on, to be, in fact, born again.

I have experienced the true awe of new beginnings—restarting my life in America as a teenager who fled the Soviet Union with his family, in turn becoming a psychologist and serving the refugee community, starting a family of my own, leading Jewish organizations through celebratory and challenging times, launching my own business, and—just last year—becoming a grandfather for the first time. 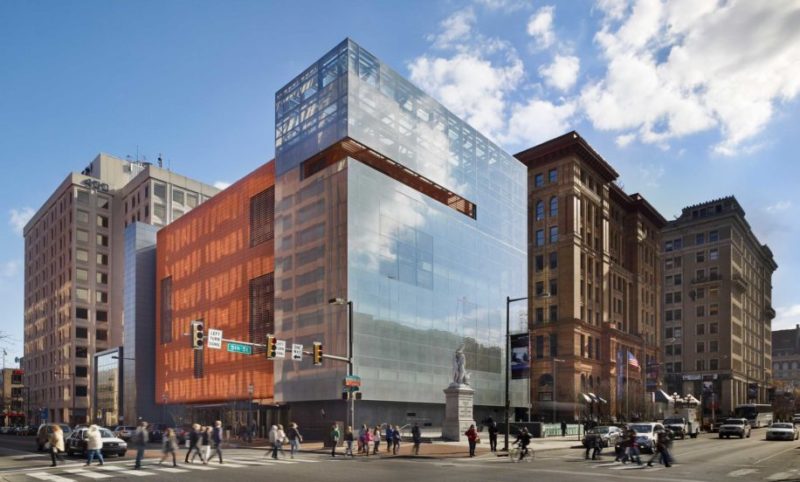 As Albert Einstein said, “There are two ways to live your life. You can live as if nothing is a miracle. You can live as if everything is a miracle.” Even as someone who has had so many renewals, I can’t help but think about what has just transpired—in time for the Days of Awe—to the National Museum of American Jewish History, where I serve as CEO, in terms other than “miraculous” and, indeed, “awesome:”

After 18 months in bankruptcy and pandemic-induced closure, our museum is being reborn.

On September 1 (Elul 24th, 5781), our exit plan was confirmed by the court, and in just a few short weeks (Tishri 5782), we will have officially emerged from Chapter 11 bankruptcy reorganization. We went into the reorganization process on March 1, 2020 with approximately $30 million in debt and are emerging with a plan that essentially eliminates the museum’s debt thanks to the extraordinary generosity of our former trustee Mitchell Morgan and his family, and a group of NMAJH’s friends, including other former and current museum trustees.

It is truly a time for reflection, gratitude, and renewal.

Our dedicated board, our small and mighty staff of 11, and our volunteers and docents have worked hard over these many months, remotely and in-person, to get here. We worked with the assistance of a magnificent legal team from Dilworth Paxton LLP, financial advisors from Grant Thornton and others, and many of our loyal vendors and suppliers on the path to this moment.

We engaged in scenario planning for a variety of possible futures for the museum, eagerly anticipating the arrival of this day, all while developing and conducting dozens of online programs, educational activities, and virtual exhibitions that have reached over four million people during these eighteen months of COVID when our building was physically closed to visitors.

It was certainly hard and, at times, seemed hopeless. The pandemic impacted us all personally and professionally. We had to first furlough and, eventually, lay off most of our staff. Because we were in bankruptcy proceedings, we were ineligible for the federal Paycheck Protection Program (PPP), unlike other nonprofits and businesses. We expected the legal process to be over within about six months—it lasted three times as long.

Now that we are emerging from bankruptcy and out of the debt that temporarily impeded our operations, we can raise funds again, build-up our national presence and make plans for re-opening. I am so very grateful to our trustees, our staff and volunteers, and our friends and supporters for sticking with us through the difficult times and to the Morgan family and others who have enabled us now to chart a way forward.

Sometimes I think—even though it has been incredibly difficult—that we as an institution had to take this difficult journey these past months in order to arrive at this place of rebirth (how very Jewish of us), on the precipice of an exciting new time for the museum with a renewed lease on life, ready to plan our bright future. During my training to become a psychologist, one of my first teachers said: “Even a negative experience can be positive if you learn from it.” Or, to quote a Midrash: “Had I not fallen, I would not have risen. Had I not been subject to darkness, I would not have seen the light.”

So, where to from here?

Despite facing major challenges due to Chapter 11 and the pandemic, the last year and a half have underscored my passion for this museum and my optimism for its future. As we move forward, we will of course continue to build on our success with virtual exhibits and programs, including our national leadership of a coalition of more than 80 institutions for Jewish American Heritage Month. Indeed, I am energized by the magnitude of public response and appreciation for our more recent virtual programs. Since March 2020, the museum has offered nearly 150 public and educational programs, six virtual exhibitions, provided sixty virtual educational experiences to groups around the country, and are about to launch a new, ultra-HD virtual tour of the museum.

We are developing new ideas for special exhibits and programs and we continue to explore how can we be a place that entices and inspires the broader public.

This past year, I could not have been more proud to lead this institution which has emphasized contemporary stories of communities transcending difference to come together in mutual support and solidarity. We uplifted stories of diversity within the Jewish community through content that featured Jews of Color, Sephardic Jews, and LGBTQ+ Jews. Moreover, the Pew Research Center summarized its 2021 report on Jews in America simply: “U.S. Jews are culturally engaged, increasingly diverse, politically polarized and worried about anti-Semitism.” Our museum is the right institution at the right time to reflect and examine this ever-evolving community and identity.

Still, if we are to be a truly sought-after destination for audiences across ages and cultural backgrounds as has been our intention from our inception, then there’s much work to be done. As I mentioned, board and staff have been engaged in scenario planning, imagining the possibilities for the next era of NMAJH and asking key strategic questions. What should our core exhibition look like? What stories should we tell? How do we bring the conversations in the galleries into the present day and consider the future of American Jewish life? What would it mean to embrace a more family-centered, interactive experience?

Adoption by the Smithsonian would underscore for all Americans the importance of the role Jews play in our nation’s history as a community and in collaboration with neighbors of all faiths and backgrounds. We have a landmark building on iconic Historic Independence Mall in Philadelphia, we have an unparalleled collection of Jewish Americana—and we are the only museum anywhere dedicated exclusively to the entire history of Jewish life in America. We produce extraordinary exhibitions and programs for which we have earned support from prestigious federal agencies such as the National Endowment for the Humanities and the Institute of Museum and Library Services.

The costs to the Smithsonian of building new institutions like those listed above are in the $500 million dollar range, requiring that half the money come from the federal government and half from philanthropy. Operating costs for those museums are likely to be in the $30 to $50 million dollar range annually. Comparatively, NMAJH invested about $200 million to create our museum, and NMAJH can be absorbed into the Smithsonian for one-time capital costs of about $11 million and annual operating support of only $2 to $3 million annually. This annual support will allow us to offer free admission that other Smithsonian institutions are able to provide, and to match the free admission policies of the other historic attractions in Independence National Historic Park—the Liberty Bell and Independence Hall. When we ran a free admissions experiment in 2019, our visitorship more than doubled and brought in a significantly higher ratio of the general public than our typical attendance.

This, too, would be “awesome.”

And, so, we at NMAJH embark on this new beginning (this very unique new beginning), grateful for all those who made it possible for us to arrive at this juncture at this most auspicious moment of the Jewish calendar.

Shanah Tovah U’Metukah—a good and sweet year to come—and may you be inscribed in the Book of Life for another year!