A Muslim high school class studied the Holocaust. Here’s what they learned.

The yearlong class at Amity, a private, pre-K-to-12 school whose student body is largely Turkish-American and almost entirely Muslim, was designed to teach the history of the Holocaust, as well as its lessons, to young Muslims who may have had little previous exposure to Jews. 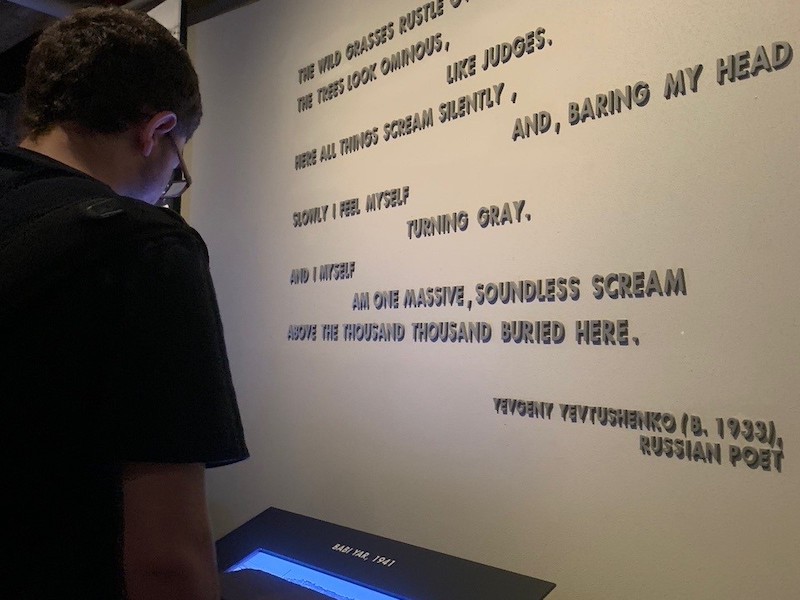 Courtesy of The Blue Card

A high school student from the Amity School visits the U.S. Holocaust Memorial Museum in Washington, D.C. in May.

While teaching about the Holocaust at the Brooklyn Amity High School this year, one of Mehnaz Afridi’s favorite stories to tell came from a country not usually associated with the Nazi genocide: Albania.

While most countries either colluded with the Nazis or surrendered to their demands, she told her students, the Muslims of Albania fought to protect their Jewish neighbors and even provided refuge to Jews from other countries.

The story may feel apt at a moment of rising antisemitism, but it was especially resonant for Afridi’s students — all but one of whom were Muslim. The yearlong class at Amity, a private, pre-K-to-12 school whose student body is largely Turkish-American and almost entirely Muslim, was designed to teach the history of the Holocaust, as well as its lessons, to young Muslims who may have had little previous exposure to Jews.

“I talked about being an upstander and not a bystander,” Afridi told eJewishPhilanthropy. “By having kids interact with different educators and models of educators, we can build a vision that allows them to partner with people of different religions or ethnicities.”

The lesson reached some students. Ceyda Betul Demirhan, a senior whose family recently immigrated from Turkey, told eJP that she now understands the need to confront antisemitism.

“In Turkey and the Middle Eastern area, the Jewish people are shown like an enemy of Muslim people there,” Demirhan said through a translator. “I learned how to create bridges between the two cultures.”

She added, “It’s important to learn in depth about it instead of hearing bits and pieces about the Holocaust… I did not know exactly what happened.”

Demirhan was one of 13 high school students who took the inaugural course this year. The course culminated in a visit to the U.S. Holocaust Memorial Museum in Washington, D.C., on May 19. The class and trip were funded by New York’s Turkish Cultural Center, which is affiliated with the school, and The Blue Card, a nonprofit that provides financial assistance to more than 3,000 Holocaust survivors in 35 states.

The curriculum was designed and taught by Afridi, a religious studies professor and director of the Holocaust, Genocide and Interfaith Education Center at Manhattan College, a Catholic college in the Bronx. The Amity School asked her to design the course because she is a Muslim with expertise in the Holocaust. Afridi aimed to give students a firm grasp of the facts of the Holocaust as well as its broader historical context. The curriculum began with an introduction to Judaism, which led to a discussion of the rise of Nazism and the trajectory of the Holocaust: from the antisemitic Nuremberg Laws and the establishment of Jewish ghettos to the construction of concentration camps and death camps.

In addition, Afridi sought to show the connections between antisemitism, the Holocaust and Islamophobia and colonialism in North Africa and the Middle East. She also included content on the role of colonized Muslim countries during the Holocaust, and worked to show students the ways “Islam and Judaism were always seen as ‘other,’” she told eJP. Students learned about the historical impact of antisemitism as well as its connection to Islamophobia. One lesson showed students 17th- and 18th-century depictions of Jews and Muslims, allowing them to see the shared experience of prejudice.

While teaching about the Holocaust in Muslim countries, Afridi wanted students to understand the role of anti-Arab prejudice and Islamophobia in countries like French-colonized Algeria, Morocco, Tunisia and Libya. She taught how colonial forces created wedges between Jews and Muslims in those countries, and carried out Nazi policies such as the creation of concentration camps.

Some Brooklyn Amity School students who took the course had some prior knowledge about the Holocaust but expressed a desire to learn more. Afridi said that many of the students’ preconceptions about Jews may come from media produced in countries like Turkey or Saudi Arabia, where antisemitism is prevalent and Jewish practice may be restricted. As a result, she felt, some of the students came to the class with antisemitic stereotypes of Jews.

Afridi addressed these prejudices head-on. During a class where she shared images of Tunisian Jews and Tunisian Muslims, she noted that students couldn’t tell the difference. Afridi believes the course successfully corrected many of the students’ preconceived notions about Jews.

“They will have to think about the next time they see a stereotype of Jews in the media or hear someone talk about it,” Afridi said.

Junior Murat Kilic said that he hopes the class encourages students to forge connections with other cultures.

“As we expose these kinds of programs to other people not only around the community but around the world, we can understand each other and see how we can try to fix these problems and help one another,” he told eJP.

In addition to the history of the Holocaust, Afridi taught students about the Bosnian genocide in order to help them make connections to more recent examples of oppression. The program also led students to reflect on parallels between the Holocaust and present-day authoritarianism. Demirhan said she was struck by similarities between events in Nazi Germany and contemporary political repression in Turkey, as well as contemporary antisemitism.

“There’s a purge happening in Turkey and my family is in a difficult situation there,” Demirhan said. Regarding antisemitism, senior Aysegul Kaya said the class “definitely made us see it more clearly and realize what actually happened and the impact it had on people and the impact it still has.”

The Blue Card has invested in other forms of Holocaust education, including a program for b’nei mitzvah students that partners them with survivors. The group also sends survivors to speak at schools and synagogues. This year’s partnership with the Amity School is different, however, because it sought to bring Holocaust education to non-Jewish youth.

“It’s really just about breaking stereotypes, especially with so much antisemitism in the last couple of years,” Milana Hazan, The Blue Card’s associate executive director, told eJP. “It’s ultimately about bringing communities together. New York is home to such diverse groups, so that really was at the heart of the program.”

Another aspect of the course that stood out for students was a visit from Sami Steigmann, a Holocaust survivor who receives support from The Blue Card.

“They were so captivated by him,” Hazan told eJP. Steigmann’s visit to the class came at the end of the school day. But Hazan was struck that when time ran out, “They all stayed. They all went up to him and they had so many questions to ask him.”

“I got to understand the impact it had on people,” she said. “I felt really emotional to hear from him what his own experiences were.”

According to Hazan, the feeling is mutual. Amid surging antisemitism, she has noticed a growing desire among The Blue Card’s survivors speakers’ bureau to reach new audiences, like the Amity School students, and correct inaccuracies before it’s too late.

“They’re recognizing the fact that their time is so limited, so many of them who have been silent for many, many years feel the need to speak up,” she said. “We want to be able to give them the platform and help them spread the word, because unfortunately in just a few years we aren’t going to be able to have survivors speak and convey their stories.”