The Solomon Leadership Program doesn’t fit neatly into a box. 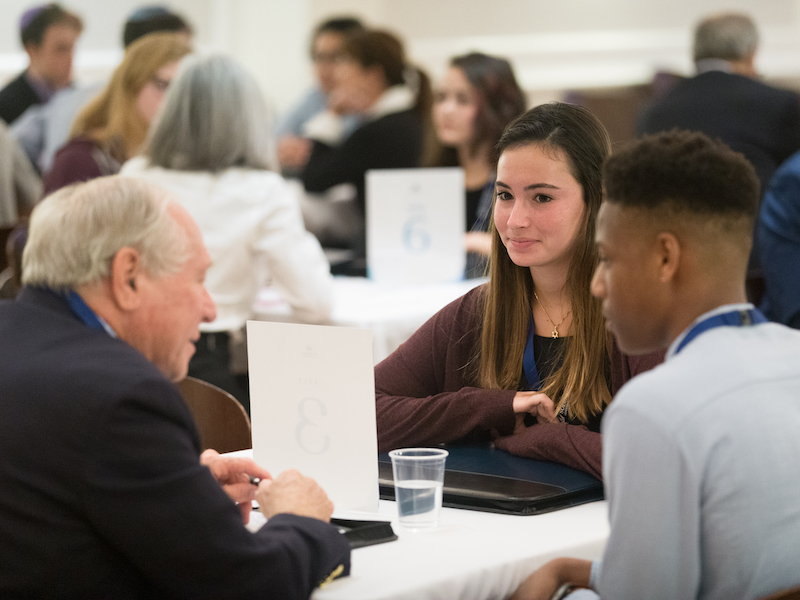 Joelle Carmel is Jewish, and is active in Jewish programs when she’s not in her high school classes — but one of her most impactful moments in a synagogue in recent years didn’t take place in prayers, a youth group or a Jewish class.

Instead, it was a conversation with a local juvenile court judge, who explained the dilemmas she confronted when dealing with defendants facing harsh sentences.

“She felt compassion for them, even though she had to follow the rule of the law,” Carmel, now a junior in high school, told eJewishPhilanthropy. “She also had to consider what they were going through and find a balance. There was a difference between going by her values and going by what the law required.”

Carmel said it was a lesson in “sticking to your core values” in adverse situations — one of the goals of a quickly growing youth educational program, founded in a South Florida Orthodox synagogue, that’s spreading across the country and globe.

The program, called the Solomon Leadership Program, doesn’t fit into the usual mold. It was founded at, and partially runs through, the Palm Beach Synagogue, which is Orthodox, but welcomes non-Jewish participants. It grounds all of its lessons in Jewish texts, but is not a Jewish education class and is affiliated with a local Christian university. It’s a college-accredited course that affords students three credits, but doesn’t give them letter grades.

Instead, it’s billed as a chance for 10th to 12th graders to get the training in life that they may be missing in their school curriculum. The course at Palm Beach Synagogue, which lasts about six months, has roughly two dozen participants study eight “pillars” of leadership — such as character, communication or judgment — meet with adult guest speakers and mentors, and complete coursework that helps them explore how those values play out in their own lives.

“It’s helping them understand themselves better, and saying, ‘This is what’s really important to me,’” Sarah Dworcan, the program’s executive director, told eJP, adding that the program is about “being able to guide their moral compass, and as much as we hope that a traditional education does that, unfortunately it doesn’t do it in its entirety because often it’s just about getting the good grade.”

The program is also growing. It doubled its budget this year from $260,000 to $500,000, and after having started in 2016 in Palm Beach, it has been licensed to 15 synagogues in Florida and as far afield as Sydney, Australia. Its principal funder has been the Palm Beach-based Sosnow Foundation, and healthcare entrepreneur Lawrence Sosnow is the program’s co-chair, though it is hoping to broaden its funding base as its budget increases. The students pay a fee of $300 to participate.

All of the synagogues running the program, so far, are either Chabad centers or synagogues led by a Chabad rabbi. Many of the Jewish texts or stories in the curriculum that don’t come from classical sources such as the Talmud also center on Orthodox rabbis. But Rabbi Moshe Scheiner, who co-chairs the program, hopes it spreads not just to a broader spectrum of Jewish life, including non-Orthodox synagogues, but also outside of it. He’s in talks with a local church that’s interested in the curriculum.

“We designed this as a local Palm Beach Synagogue program, and then another synagogue down in my neighborhood heard about it… and they were interested in running it there,” Scheiner told eJP. “We have the formula, we have the curriculum, we had everything to license it to them.”

The program meets every two weeks, and its curriculum has three prongs: For each of the “pillars,” students complete coursework and readings at home. Then, each two-hour class begins with a guest speaker who discusses that session’s theme. Finally, the students meet in small groups with a mentor who encourages them to consider what they’ve learned, then complete an online quiz on the unit.

For the first pillar, “Character,” students first need to review a list of around 100 qualities (self-control, loyalty and versatility, to name a few) and check off which apply to them. They then organize those qualities into up to four groups, then describe how they put the quality into action. They’re also assigned readings, including a portion of a David Brooks column in The New York Times called “The Art of Gracious Leadership,” stories about Presidents George Washington and Harry Truman and a method for self-improvement composed by Rabbi Menachem Mendel Leffin in 1812. It ends with a quote by Rabbi Yisroel Salanter, the 19th-century figure regarded as the founder of the Jewish ethical Musar movement.

“It’s a way to introduce and welcome many new families to our community,” said Rabbi Eliezer Wolf of the Beit David Highland Lakes Shul in Miami, which began its own chapter of the program last year with 12 students. “This is a chance to engage them.”

The guest speakers for the Palm Beach Synagogue chapter of the program range from government officials to business people to nonprofit executives and military veterans. Many, though not all, are Jewish. Each chapter finds its mentors and guest speakers, who are unpaid, locally.

“It’s no different from adults in the corporate world,” said Betsy Sheerr, a communications professional and lecturer who is a mentor at the Palm Beach Synagogue program, regarding the teens’ concerns. “There’s a fear [among the teens] of public speaking, there’s a lack of self-confidence, there’s an anxiety of being perceived as less than perfect, and as such there’s a reluctance to present a point of view.”

Students in the program receive three college credits from Palm Beach Atlantic University, a small Christian school. The accreditation comes via Arthur Johnson, an emeritus professor of leadership at the university. Johnson told eJP that the curriculum for the course — with two to four hours of homework per biweekly session, plus a final essay and presentation on what students learned — is as rigorous as the university’s freshman leadership seminar. It’s no problem, he feels, that the course materials are peppered with Jewish texts — something he also does in his own courses.

“In my opinion, the Solomon Leadership Program is a values-based youth leadership program based upon Judeo-Christian values,” Johnson told eJP. “In all of my syllabi, I have a verse, usually from Proverbs or Psalms, that is relevant for the course. It does not end there obviously, as there are many examples of various kinds of leadership displayed in what we as Christians refer to as the Old Testament.”

Dworcan also told eJP that affiliation with a Christian college poses no obstacle to the Jewish-themed program, noting that the curriculum was composed by the program’s educational director, an observant Jew. “It has no bearing on the course,” Dworcan told eJP regarding the Christian affiliation. “The curriculum is based on Judaic values which they naturally respect and appreciate.”

The curriculum does not only appeal to Jews — or Christians. While synagogues that have adopted the course may teach only Jewish teens, the original program at Palm Beach Synagogue has attracted students from varying religious backgrounds. The key, said Dworcan, is finding students who are “already driven and already motivated to want to succeed and be a leader.” Carmel’s extracurricular activities, for example, range from water polo to youth orchestra to NCSY, the Orthodox youth group.

Raunak Manchanda, a Hindu student who took the course in 2021 and was mentored by Sheerr, said that she appreciated the Jewish themes in the course.

“I didn’t feel a difference learning about Hinduism and learning about Judaism,” Manchanda, now a freshman at the University of Texas at Austin, told eJP. “All of the learnings that were coming from the Bible or the Jewish text, I took them like I would take anything from a Hindu text… We didn’t really emphasize who was Jewish, who wasn’t. I think everyone really connected with it in the same way because if you take the religion out from it — the learning, the teachings they’re giving us, it’s just basic humanity.”