The new museum space will extend its footprint outward, with new outdoor reflective spaces, a Learning Center Pavilion that will house special exhibits, a 200-seat theater, two classrooms, a gift shop and a café. 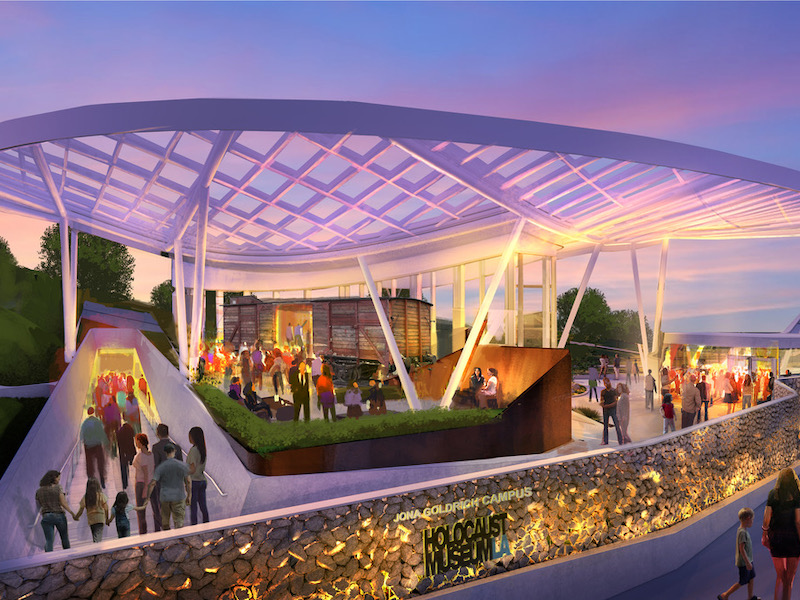 Courtesy of the museum

A rendering of the expanded Holocaust Museum LA space.

The Holocaust Museum LA has received a $5 million gift from Eric and Susan Smidt of The Smidt Foundation, which will help the museum expand its physical footprint, eJewishPhilanthropy has learned.

Beth Kean, the museum’s CEO, told eJP that the Smidt Foundation gift is the largest-ever contribution to the Los Angeles museum from a family or foundation whose members are not descendants of Holocaust survivors or victims.

The museum was founded in 1961 by Holocaust survivors and their relatives, making it the oldest Holocaust museum in the United States. Its mission is to house their personal artifacts safely and in perpetuity, to memorialize their lost loved ones and to educate the public.

“We have been watching the rise in hate crimes against Blacks, Asians, Latinos and so many other communities across the country with great concern,” Eric Smidt told eJP. “And the dramatic rise in hate directed at Jews only a few generations following the Holocaust is deeply disturbing. We’re supporting Holocaust Museum LA for the same reason we’ve been longtime supporters of [the Anti-Defamation League], because we think education is the key to reversing these terrible trends.”

Susan Smidt told eJP, “With this gift we hope to help Holocaust Museum LA broaden their reach by opening their doors to many more children and families from Los Angeles and beyond.”

The Smidt Foundation’s gift will be used as a matching grant for smaller donations, with the foundation matching each donation two-to-one — effectively raising up to $7.5 million. The matching program is named after the traditional Jewish symbol of the Tree of Life, and will go toward the construction of a new courtyard with a tree at its center, designed by the award-winning architect Hagy Belzberg, who also designed the museum’s main building.

“The Tree of Life is a powerful symbol across cultures,” said Robin Kramer, The Smidt Foundation’s managing director. “The Tree of Life combines welcome, rootedness and hope, and reflects the aim of the matching grant to encourage new and deeper support for the museum’s future and its growth.”

Kean added that the grant was motivated by the foundation’s “desire to help the museum grow to reach more people and achieve a sustainable place in our community.”

The museum has raised 80% of the about $45 million needed for construction, including the Smidt gift, and is planning on breaking ground at the end of the summer. The new museum space will be named the Jona Goldrich Campus, after one of the museum’s late co-founders who was also a Holocaust survivor, and will extend its footprint outward, with new outdoor reflective spaces, a 16,000-square-foot Learning Center Pavilion that will house special exhibits, a 200-seat theater, two classrooms, a gift shop and a café.

It will also include a theater for the USC Shoah Foundation’s “Dimensions in Testimony” program, which enables visitors to interact with a hologram of Holocaust survivor Renée Firestone, who served many years on the museum’s board. In the coming years, the museum plans to highlight other survivors who have been filmed, including Spanish-speakers.

“Building out digital technology platforms to complement the brick-and-mortar additions is a priority to ensure our museum’s artifacts, survivor stories and important lessons are accessible to students and visitors anywhere in the world,” Kean said. “We’re also aiming to bridge the gap of history and [reach the] next generation in new, innovative ways.”

On top of the building’s existing structure in Los Angeles’ Pan Pacific Park, the museum will add a 2,500-square-foot pavilion to house an authentic Nazi-era boxcar found outside the Majdanek death camp in Poland. Visitors and students will be able to walk inside a protected portion of the boxcar and interact with multimedia exhibits.

“Being inside the boxcar while being able to see the park outside presents many similarities to the ghettos and death camps, as normal life took place just outside the walls and barbed wire,” Kean said.

At present, the museum serves 50,000 visitors annually. The expanded campus is slated to open in 2024, and after that Kean expects the number of visitors to spike, reaching 500,000 by 2030, including 150,000 students. At present, a vast majority of the students who visit the museum do not identify as Jewish.

“Students enter Holocaust Museum LA as bystanders and leave as upstanders,” she said. Currently, the museum serves groups starting from 5th grade through high school, but the new pavilion will welcome students as young as kindergarteners to learn, according to Kean, “the critical lessons and continued relevance of the Holocaust.” She said it will also “introduce social and emotional learning, and provide tools to build acceptance, empathy, and community.”

The xpansion comes at a time of rising demand for education against hate. According to the ADL’s annual audit, there were a record 2,717 antisemitic incidents of assault, harassment and vandalism in the United States in 2021, an increase of 34% over the previous year. The audit tallied 14 antisemitic assaults in Los Angeles last year, in addition to incidents of harassment and vandalism.

This rise in antisemitic activity “underscores the urgency of Holocaust Museum LA’s mission and work to teach the critical lessons of the Holocaust, the dangers of identity-based violence, and the profound importance of social justice and standing up for others,” Kean said. “A strong partnership with a philanthropic leader in Los Angeles like The Smidt Foundation highlights the importance of the community coming together to fight hatred in all its insidious forms.”

Eric Smidt and his father, Allan, founded Harbor Freight Tools in 1977, which today has more than 1,300 stores and more than 40 million customers. The business is still family-owned, and the family foundation’s flagship program is Harbor Freight Tools for Schools, which funds the teaching of skilled trades in American high schools, and provides millions of dollars in prizes and grants to trade teachers in public schools and their programs.