In 2019, when the Jewish Community Foundation of Los Angeles was preparing grants to organizations addressing homelessness, the board was surprised to learn that many homeless residents are older adults. The number of homeless people over 55 in L.A. had been rapidly increasing for several years, driven in part by residents falling into poverty.

“It led our board to really want to build on that grant process [and] focus on older adult poverty,” Naomi Strongin, vice president of the JCF’s Center for Designed Philanthropy, which manages the foundation’s grantmaking, told eJewishPhilanthropy. In 2015, the median personal income for seniors in Los Angeles was under $20,000 a year, with almost a third of all California seniors living below the poverty line.

This year, the foundation approved $1 million in funding to five organizations addressing older adult poverty through its General Community Grants initiative. The grants will support increased access to healthcare, food, housing and resources for independent living.

The community grants program, launched in 2008, is the foundation’s main funding vehicle to non-Jewish causes. Grants focus on addressing wider social issues in the greater L.A. area, such as homelessness in 2019 and education equity in 2021. “This is really demonstrating the foundation’s commitment to tikkun olam, to repairing the world beyond the Jewish community,” Strongin said.

Money for the grants comes from the foundation’s endowment and the management fees for overseeing donor-advised funds, which made up roughly half of the foundation’s $1.4 billion in managed assets in 2020. In some sense, the foundation’s community grantmaking reflects the priorities of donors, some of whom make a point of giving to non-Jewish causes, Strongin said.

Chanan Weissman will step down from his role as White House liaison to the Jewish community this week, and will be replaced by Shelley Greenspan, who joined the White House last month as policy advisor for partnerships and global engagement at the National Security Council, Jewish Insider’s Gabby Deutch reports.

Bio in brief: Greenspan’s background spans the federal government, the private sector, presidential campaigns and nonprofits. After launching her career on AIPAC’s legislative team, where she covered the House Foreign Affairs Committee and the Senate Foreign Relations Committee, she worked on Hillary Clinton’s 2016 presidential campaign before spending three years in Amazon’s policy team in Washington. Since 2020, she has worked at the State Department as a civil servant. She helped lead a national cohort of activists called “Jewish Women for Joe” during the 2020 presidential election.

Two-way street: The Jewish liaison position requires a nuanced understanding of the landscape of Jewish communal life, and a willingness to engage segments of that community that may be at odds with administration policy on many issues. “If you think about the job description, it’s two-way advocacy. You represent the administration to the community and the country, and you represent the community within the administration,” said Ann Lewis, co-chair of Democratic Majority for Israel. Lewis worked with Greenspan on the 2020 campaign.

Sense of purpose: Greenspan, a Miami native, has held board positions with several U.S. Jewish organizations, including the Anti-Defamation League and Jewish Women International. Both organizations “are simultaneously committed to the Jewish people and humankind as a whole,” Greenspan said in 2020. “I once heard Congressman John Lewis say that to be an effective public servant, you must love people. Serving in leadership roles with JWI and the ADL has given me a sense of purpose and the opportunity to build a community that actively engages in these ideals.”

Who’s in? An exploration of the changing Jewish religious economy

“Religion in the United States is valued at $1.2 trillion a year, making it equivalent to the 15th largest national economy in the world. The faith economy has a higher value than the combined revenues of the top 10 technology companies in the U.S., including Apple, Amazon and Google,” writes Steven Windmueller, interim director of the Zelikow School of Jewish Nonprofit Management, in an opinion piece for eJewishPhilanthropy.

$9 billion spent per year on social programs: “More than 344,000 congregations and religiously affiliated organizations across the U.S. employ hundreds of thousands of staff and purchase billions of dollars in goods and services. More than 150 million Americans, almost half the population, are members of faith communities. Although the numbers of religiously connected individuals have been declining, the sums spent by religious organizations on social programs have tripled in the past 15 years, to $9 billion. The growth of the religious economy has been generated in part by the availability of new funders who have entered this marketspace, expanding the reach of this sector. By comparison, 20 of the top 50 charities in the U.S. are faith-based, with a combined operating revenue of $45.3 billion.”

Jewish giving: “The average annual Jewish household donates $2,526 to charity yearly, far more than the $1,749 their Protestant counterparts give or the $1,142 for Catholics… In contrast to other religious communities, Jewish donors have an array of access points whether to join and/or fund a religiously based institution, including synagogues, schools or camps. Alternatively, the Jewish philanthropic space affords donor participation with Israel-based organizations, cultural, social service and political advocacy groups, legacy movements and the emergent network of Jewish startups. The growth in Jewish giving most certainly is aligned with the growth of foundation support, the presence of new donors and the expansion of endowment giving.”

Survival Stories: Telling the story of having been shot and his survival is a blessing because it can help others “approach their lives with new hope and optimism,” Damion J. Cooper writes in The Chronicle of Philanthropy, but it also forces him to relive his traumas: “Most often I must tell my story to people whose own life experiences are nothing like mine and who can never truly understand the feelings behind my words and often my tears. In many cases, I must relate my story at a moment’s notice when I am not emotionally prepared. At other times, I must compress that story into a tight timeframe. Imagine being rushed to explain the night someone nearly took your life — and how that night changed you forever…I founded my nonprofit in 2014, and it has grown every year since then. The work we do has changed countless lives for the better. When will the success stories of the boys we support and our evidence-based programming be enough to persuade donors that we deserve their support? When will Black- and brown-led organizations such as mine be allowed to stand on our own merit like so many nonprofits run by our white counterparts? When will it no longer be necessary to relive our near-death experiences, deaths of loved ones, or postprison redemption stories to be deemed worthy enough for funding — without having to be retraumatized by our pasts?” [ChronicleofPhilanthropy]

Humanity-based Hiring: Casting a wide net, including salary range in job postings, forgoing cover letters for video introductions and being crystal clear about what a job and work culture really entails are among the strategies for “humanizing your hiring process,” Mordy Walfish, COO at Leading Edge, writes in The Chronicle of Philanthropy. “It may seem a bit countercultural to be upfront about some of the ‘blemishes’ in a job posting (e.g. a detail-oriented culture, periods of intense workload), but every job has challenges. It’s a sign of respect for candidates to reveal what ours are. Then, candidates can decide for themselves if they are willing and able to tackle these challenges. We also clearly lay out each step of the process and the overall timeframe. We include a commitment to diversity, equity, and inclusion explicitly, and we try to be thoughtful about how the role might appeal across demographic groups (sometimes using external resources like Textio, which helps employers use more inclusive language). Beyond the explicit information we include, we also work hard to convey our organizational culture implicitly in the tone and voice of the job posting.” [ChronicleofPhilanthropy]

Shabbat as Spiritual ‘Field’: An al fresco, interactive “Open Shabbat,” held every fourth Friday of the month and affiliated with San Francisco Night Ministry,  serves the needs of local unhoused people in the Mission District. Rabbi Jeremy Sher leads the service in cooperation with S.F. Night Ministry, an interfaith nonprofit that provides spiritual care to the city’s unhoused, poor and people with HIV/AIDS, Gabe Stutman writes in J.: The Jewish Weekly of Northern California: “Sher explained that the Mishebeirach prayer asked God for healing for the sick — a few people chimed in with names of loved ones in need of healing. ‘My grandmother,’ one man said. After the V’ahavta, a prayer about loving God, Sher asked people to share a story of being afraid; a time when they persevered through faith. Mike told a story about nearly escaping death in a fire. For his sermon, Sher spoke in support of wealth redistribution, tied to the Book of Numbers. He described what he called ‘blasphemous’ wealth disparities in the city. ‘There is so much food here in the Mission,’ he said. ‘And yet people go hungry.’ Only a few chairs at the service were filled by people not associated with the Night Ministry, but others lingered nearby, listening… At times the scene felt chaotic. Occasionally, people who were mentally ill or under the influence of drugs or alcohol happened by, partially clothed and clearly in dire straits. … Still, it felt to Trent Thornley, the executive director of S.F. Night Ministry, as if the service had created a spiritual ‘field’ in the midst of surrounding chaos.” [J.]

The Prime Minister’s Office in Israel issued a directive on Monday prohibiting bringing a mechitza, a gender separation barrier, into the egalitarian section of the Western Wall following previous serious disturbances at the site…

Leaders from local Jewish groups in St. Louis gave a tour of the city’s Holocaust museum and a local Jewish food pantry to Rep. Cori Bush (D-MO) days after an uproar over the legislator’s relationship with an activist with a history of making antisemitic comments…

Scott Kaufman has been named interim CEO of Jewish Silicon Valley, which formed last year when the local federation and the Addison-Penzak JCC merged…

Steven Wilson is stepping down as the chief executive of Britain’s United Synagogue next spring….

Liz Offen has been promoted to national director of strategic partnerships at Yachad, the Orthodox Union’s organization for individuals with disabilities in the Jewish community…

The board of trustees of The Jewish Theological Seminary elected Robbie Cohen-Millstein, principal broker of The Millstein Group, and Molly Levinson, founder and CEO of The Levinson Group, to be members of the board…

The Rockefeller Foundation, created with wealth generated from the oil industry more than a century ago, plans to make the fight against climate change central to all of its work, including its operations and investments…

David Ostrove, CFO of the Schechter School of Long Island, a Jewish day school, was charged Monday with grand larceny and money laundering, for allegedly stealing $8.4 million from the school over his 11-year tenure…

Friends of the Israel Defense Force’s Washington, D.C., Maryland and Virginia chapters are hosting Legacy Camp, provided every year to b’nai mitzvah-age children and siblings of fallen soldiers, in partnership with the Yad Labanim organization and the IDF. Following a two-year hiatus due to COVID-19, camp began last week with 21 children at Capital Camps in Waynesboro, Pa., and will be followed by a tour of Washington, D.C.; Shabbat at host homes in Baltimore; a day in New York City; and a pool party at an FIDF donor home in Westchester County, N.Y., before participants return home to Israel.

Your Daily Phil: A new tech-based charity Down Under + Outdoor learning at an early childhood center summer program

Your Daily Phil: When health issues prevent fasting + Why stories matter with donors 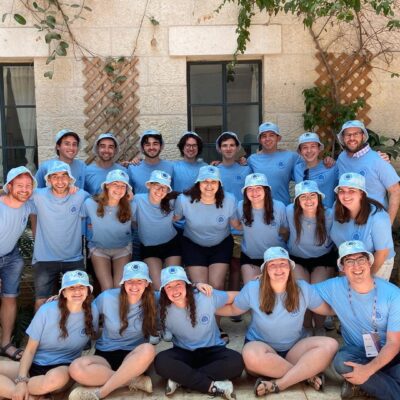 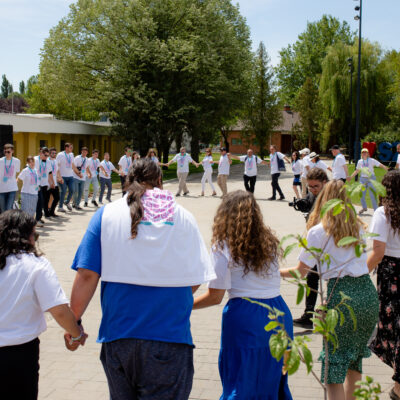