Synagogues retiring sets of old prayer books is a common occurrence. It’s rarer for a former congregant now living out of town to volunteer to give the books a second life. 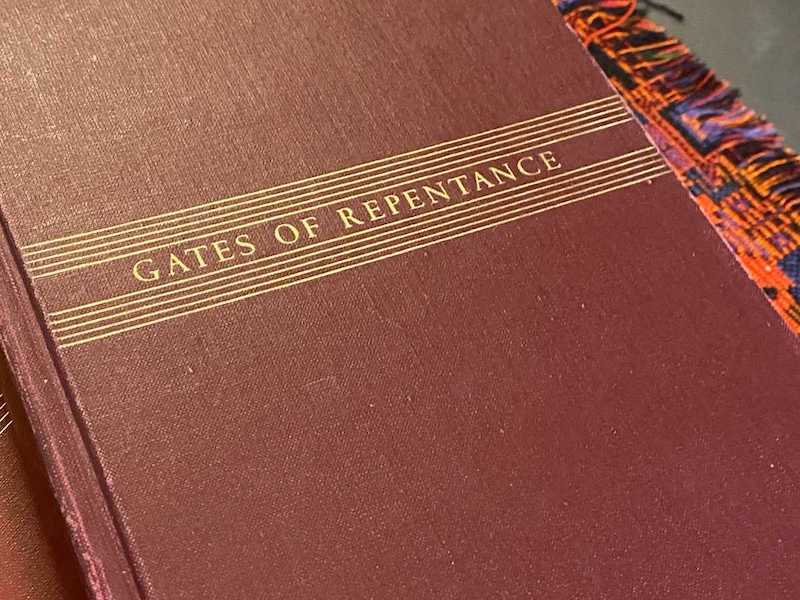 At this moment, Rabbi Lex Rofeberg is awaiting the arrival of 100 out-of-print, used High Holiday prayer books, which he has shipped halfway across the country and which he plans to store in his attic in Providence, R.I. — at least for the time being.

It’s an especially unusual endeavor for Rofeberg, a Jewish social entrepreneur whose brand is unusual Jewish endeavors. In the past, Rofeberg has organized Shavuot Torah study sessions at IHOP franchises. This Passover, he ran a digital afikoman hunt. He also works at a digital Jewish organization called Judaism Unbound that, among other things, seeks to interrogate Jewish ideas and assumptions.

This latest project is almost the opposite: Instead of challenging Jewish tradition, he hopes to preserve a vestige of it before it disappears.

The 100 High Holiday prayer books, called machzors, are editions of Gates of Repentance, first published by the Reform movement in 1978, and retired about seven years ago in favor of a new machzor. Rofeberg’s childhood Reform synagogue, Congregation Sinai in Milwaukee, Wis., ordered the new machzors last year, and planned to bury its 500 copies of Gates of Repentance at a local Jewish cemetery next month, a traditional practice for disposing of holy books.

When Rofeberg got wind of that plan, it struck a nerve. So he decided to ask the synagogue for 100 copies, and to see if he could distribute them himself to communities in need.

“I have a deep personal relationship with Gates of Repentance,” Rofeberg told eJewishPhilanthropy. “I grew up engaging with it every single Rosh Hashanah and Yom Kippur. It’s part of the material culture of my Jewish experience. The image of it on my bookshelf brings up memories.”

Synagogues retiring, and burying, sets of old prayer books is a common occurrence, and sometimes they’ll reach out to contacts to see if anyone can use the books before they go in the ground. It’s rarer for a former congregant now living out of town to volunteer to give the books a second life.

“I think it’s excellent,” Congregation Sinai Rabbi David Cohen told eJP regarding Rofeberg’s initiative. “Lex is a very entrepreneurial thinker. He saw an opportunity to make a shidduch [Yiddish for ‘match’], and he made it happen.”

It has cost $108, a reduced book rate, to ship the tomes, which are currently in the mail and set to arrive in the coming days. He’s also posted on Facebook to see if anyone wants a copy or 50, and may reach out to Judaism Unbound’s 6,000-person email list.

He’s already gotten tentative commitments for most of the books: a Jewish chaplain at a small Southern university and a rabbi at a synagogue in the Mountain West have each inquired about taking 30. A handful of other people have asked for one or two copies. Rofeberg is charging only the price of shipping.

Rofeberg stressed repeatedly that just because he’s trying to save Gates of Repentance doesn’t mean he particularly likes it. His qualms range from its lack of Hebrew transliteration to his tally of the more than 100 people listed in the acknowledgements, which — by his count — include just five women. He also believes some of its readings are arcane. When he co-led a High Holiday service in Hot Springs, Ark., years ago, he gave a sermon explicitly touting the new Reform prayer book, Mishkan Hanefesh, as a replacement.

The Central Conference of American Rabbis, the Reform movement’s rabbinic arm, which published both books, had similar reasoning when it came out with Mishkan Hanefesh. At the time, the new book’s executive editor, Rabbi Hara Person, told J Weekly, ““Today we live with different fears and anxieties than we lived with in the ’70s and ’80s. There are references in Gates of Repentance to the post-Vietnam era and the fears of nuclear holocaust. Our fears are different.”

But Rofeberg still wants to make sure that the machzor used by millions of Reform Jews for decades isn’t forgotten. “This is a book that’s so important to collective Jewish memory, and no one’s going to remember it if we don’t take the time to preserve it,” he said. “There’s an impulse once a new book is created to say, ‘This is the book of our movement’ and immediately discard our memories of the old one. Finding a way to cherish elements of Jewish tradition, even recent Jewish tradition — we don’t do that enough.”

Congregation Sinai’s former rabbi, Jay Brickman, served on the editorial board of Gates of Repentance, and his successor, Cohen, still sees beauty in it even though the synagogue opted for the new machzor last year. Brickman died earlier this year at 96.

“It’s the one I grew up with so of course I’m going to miss it, but I also recognize the need for moving on,” said Cohen, who will still be burying about 400 copies. “I’m pleased that so many of them are going to have a living home.”

And if the plan doesn’t pan out? Rofeberg isn’t too concerned about having to store 100 identical copies of a hardcover book that’s used only twice or three times a year. He’s pretty sure his wife will understand.

“We haven’t talked about it that much,” he said. “She knows I do weird Jewish sh*t. Luckily we have enough space.”