Turning a synagogue into a Jewish cultural campus

Temple Beth Am in Miami is a large Reform congregation that owes much of its success to the vision of its founding rabbi, Rabbi Herbert Baumgard, z”l.  A pioneering rabbi in many respects, Rabbi Baumgard’s lasting legacy is punctuated by his belief that in order to flourish and remain viable, Temple Beth Am needed an exemplary Jewish day school. Today that day school contains approximately 500 students from pre-K through 5th grade. We are a 1500 family member unit congregation that has grown by about 400 families over the last six years. We attribute that growth to three factors: a) our synagogue provides outstanding programming; b) our day school has acquired a reputation for educational excellence; and c) several other local congregations have either closed or are struggling. 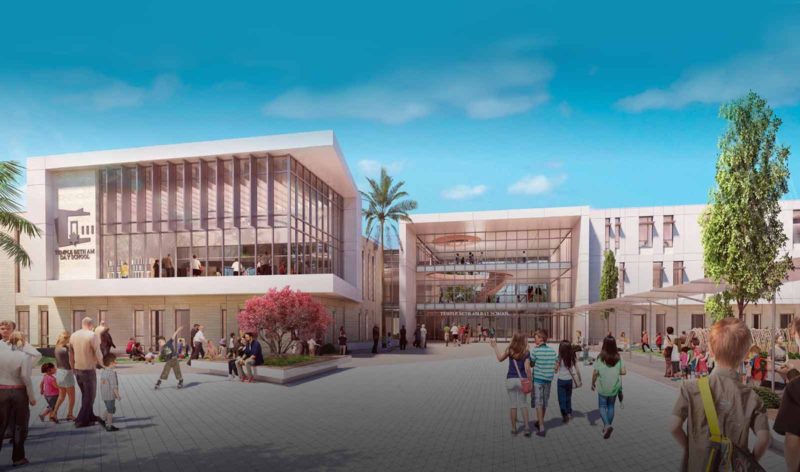 About five years ago, one year after I arrived, one of our major donors was waiting for his wife while she attended a program on campus. He went for a stroll around campus and recognized that our relatively new main sanctuary and administrative building was incongruent with the outdated and much older remaining buildings on campus. He engaged me in a conversation about our congregation’s future and it became clear that in order for our day school to succeed, it would have to be as technologically advanced as the other excellent public and private schools in our area. With many of them building new facilities, it was incumbent on us to upgrade our campus and the buildings on it. Even though our school is full and Temple membership is strong, we recognized that if we allowed our school to fall behind other schools in the area, we would not be taking advantage of a key asset that has been central to our congregation’s success over the years.

As we began to conceptualize a capital campaign whose main goal was to rebuild our school, we realized that we could also utilize this campaign as an opportunity to transform the way our Temple functioned as well. Believing that old models of rolling out a mish-mosh of programs, prayer services and learning opportunities no longer captivated the masses, we developed a vision that would constitute a Jewish “game-changer” for our neighborhood and our community.

Enter the 88th St. Center. While this is not yet the official name for our new cultural and activity center, we decided to build a new building that could serve as a central home for our community. Our vision is that this new center will be a downtown Jewish campus that could become our community’s home away from home. After studying the best program centers in the Jewish world, we attempted to design a campus that could offer the widest range of cultural opportunities available. Thanks to donors who were big thinkers, we decided to do the project right and that would take some serious money. The campaign goal that we eventually rolled out was $55 million.

At first there were some detractors who wondered why our Temple needed a “Taj Mahal” to attract members. We were adamant that competition for people’s time, resources and energy was fierce, and if we were going to attract big numbers to our programs and events, we needed first class, state-of-the-art facilities. We formulated a plan with all stakeholders involved and slowly but surely a vision for how the building would function began to emerge. Beth Am already had the reputation as a successful and dynamic Reform congregation. But the message of our campaign conveyed that we were not going to coast on that reputation. We put out a grand vision of an exciting and vibrant future. And that story inspired our members and community and has led to a very successful capital campaign.

A campaign as large and as ambitious as the one we have undertaken is a bit of a puzzle. But gradually, more and more pieces are falling into place. One thing that I noticed was that every January our campus was really humming. In January we annually host the Miami Jewish Film Festival, the world’s third largest such festival. What I saw was that each night the parking lot was jammed. Students were all over campus for Hebrew High School, youth group functions, and our various after school activities. More children and parents were shuffling in and out of our basketball arena for games, and other Temple meetings and functions were happening as well. I saw a campus so alive and I wondered: why can’t it be like this every month? Our plan is to continue with the Film Festival in June, but we envision themes for other months as well including music, comedy, culinary, arts, Israel, etc. I knew also that for such a hub of activity to exist we needed good food. Teaming with a very popular, member owned, local restaurant, we intend to build a café on the first floor that serves great food in a beautiful location.

While Miami has long been a large city with a very prominent Jewish community, our emergence as the city’s largest Temple is an indication that the southern suburbs of the city continue to attract many Jews.  Our area provides a more suburban feel than Miami Beach, and it is still close to all of the culture and attractions that downtown Miami offers.  We continue to see significant positive demographic trends, with Jewish families moving to Miami from the northeast and from Latin America. While Miami is a large way away from New York City in terms of size and population, we believe that our new cultural and activity center will put us on the global Jewish map and help to make Miami’s Jewish community even stronger than it already is. Our hope is that this center will be a stop on every national tour of Jewish entertainment, education, and performance.

We hope to offer an explosion of Jewish cultural activity, but still remain committed and dedicated to our Jewish values and our love of Torah. Our new center will include a Torah learning center, modeled after the great European Yeshivahs of old, where visitors can enter anytime to learn informally and formally from the many opportunities our clergy and educators will offer. We will also house a Goodwill store, where visitors can purchase goods from the store and then deliver them to various agencies in Miami in need of such supplies. The store will be run and operated by lay volunteers, and we believe it will facilitate tremendous opportunities for tikkun olam in our community.

It is our dream that our new, upgraded urban campus will become a vibrant hub of Jewish living, a place where you can meet a friend for a meal and then catch a movie or a lecture or a performance. It will be a place of physical and spiritual activity, a place that will inspire our members and encourage them to spend more time together doing more Jewish things together. Temple Beth Am has always been a forward-thinking institution with a first-rate Reform Jewish day school. Our goal now is to add an activity center that positions our community as one of the most vibrant Jewish cultural centers in North America.

Rabbi Jeremy Barras is the Senior Rabbi of Temple Beth Am in Pinecrest, Fl. He currently serves as a board member of the CCAR, on the AIPAC National Council, and a variety of other boards and institutions. He and his wife Jodi have two children, Ella and Ethan.