Through subsidized salaries, a program hopes to place women clergy at Orthodox synagogues

The initiative is named after the biblical judge Deborah and created by the Jewish Orthodox Feminist Alliance and Micah Philanthropies. 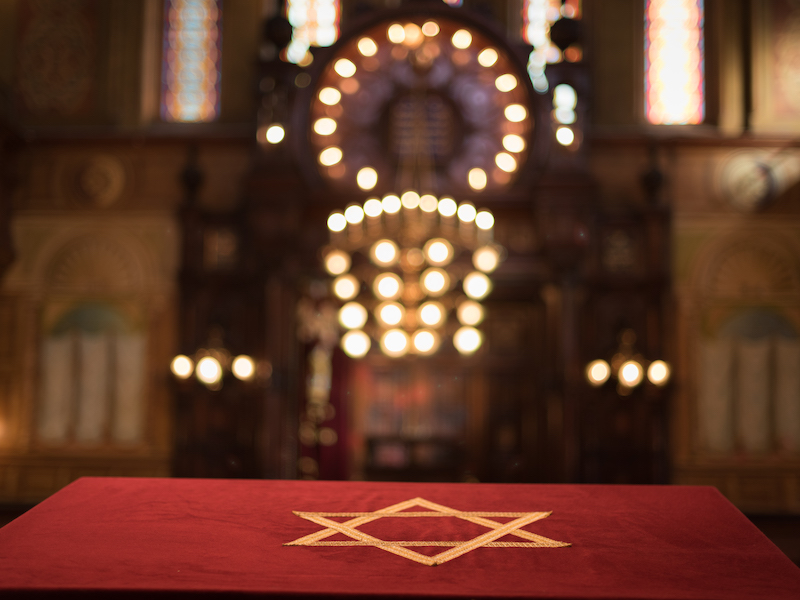 One of the challenges that Rabbi Barry Dolinger found himself with when he arrived at Congregation Beth Sholom in Providence, R.I., in 2011 as part-time rabbi (and part-time attorney) was the diversity of observance among the synagogue’s 60 or so families. The community was small, but, Dolinger told eJewishPhilanthropy, “It felt very robust because everyone was very committed.”

There were several other more traditionalist Orthodox synagogues in the area, but Dolinger called Beth Sholom a “big tent shul for anything that wasn’t Haredi.”

One potential point of contention among those subgroups was the question of women’s leadership in Orthodoxy, a movement that traditionally has prohibited women from leading services, chanting Torah in synagogue or receiving rabbinic ordination. Over the years, as the community started to grow, some Beth Sholom congregants became interested in women taking on clergy roles. This was especially true, Dolinger said, of younger families, some of them with teens.

This debate set the congregation on the road toward the Devorah Scholars, an initiative launched in 2019 to bring female clergy into Orthodox congregations. The initiative is named after the biblical judge Deborah and created by the Jewish Orthodox Feminist Alliance and Micah Philanthropies.

Devorah Scholars perform a number of community functions, including delivering sermons, teaching classes and giving lectures to the synagogue membership and the broader community. They also offer pastoral care and counseling and contribute to youth and adult education.

“Time and again, we hear from women and couples who hesitate to seek out male spiritual guidance on personal matters,” Daphne Lazar Price, executive director of JOFA, told eJP. “Having women leaders in paid positions that recognize and validate their value and qualifications dramatically shifts the dynamics on both sides of the mechitza,” the divider that separates men and women in Orthodox synagogues. She added, “It sends a clear message that the synagogue is intentionally considering women’s needs.”

Clergy who are supported by Devorah Scholars span the spectrum of Modern Orthodoxy: Some have ordination that is equivalent to a traditional Orthodox rabbinic degree, or semicha, while others are graduates of advanced degree programs that are not framed as rabbinic ordination.

The first cohort of five scholars, which launched in 2020, included three graduates of the New York-based Yeshivat Maharat, which confers full ordination on its graduates; one scholar with a master’s degree in Talmud who is also graduate of Midreshet Lindenbaum in Israel, whose website states that “women have the same right, ability and capacity as men to participate fully in the Jewish world”; and one graduate of Yeshiva University’s Graduate Program in Advanced Talmud/Tanach Studies, in which students can study for up to three years and earn a master’s degree. All three members who are in the second cohort, which launched last year, are graduates of Maharat. Additional funded congregational hires are pending. The initiative provides support to the scholars for two years.

Micah Philanthropies funds one-third of the scholars’ salaries and their congregations pay the remaining two-thirds. The first cohort of scholars was employed part-time with salaries of up to $30,000. For the second cohort, the synagogues received grants from the foundation ranging from $10,000 to $33,000 per year for up to two years of funding, meaning that each congregation would match its grant with $20,000 to $66,000 per year. In total, full-time scholars received salaries approaching $100,000 each. Some of the part-time scholars worked remotely.

“Each congregation’s leaders understand their own community’s needs better than we do,” Lazar Price said. “We leave the hiring process to them, as well as the breakdown of how much of the Devorah Scholar’s leadership is demonstrated in person versus online.”

Non-Orthodox denominations have ordained women for decades, and the question of whether Orthodox synagogues should hire women as members of the clergy has been a pressing issue for the community since 2009. That year, Rabbi Avi Weiss of the Bronx neighborhood of Riverdale, New York, ordained Rabba Sara Hurwitz and founded Yeshivat Maharat, which trains Orthodox women clergy on par with men. Other Orthodox programs in Israel also offer women ordination.

But large parts of the centrist Orthodox world — as well as virtually all Haredi Jews — oppose the notion that women can receive rabbinic ordination, which historically has been the province of men. In 2015, the Orthodox Rabbinical Council of America prohibited the ordination of women rabbis, and two years later, the Orthodox Union, a U.S. umbrella group, published a Jewish legal ruling barring women from serving as clergy in its member synagogues.

Before Devorah Scholars was created, Congregation Beth Sholom assessed its members’ comfort with women serving as clergy. Thanks to the efforts of former congregational president Brauna Doidge, the rabbi said,  the congregation brought in women scholars for one-off events, a test of the community’s possible reaction to having female clergy down the road. Over the course of various programs, the leadership and congregation tried to pinpoint their comfort level with that idea, and identified other ways to be more inclusive of women — including adding more women to the ritual committee and establishing a greater measure of gender parity in the congregation’s board.

“What we also saw is that people were really excited about the women we brought in,” Dolinger said. “Even some of the people that were more critical, would say ‘Look, I’m not really for this, this is not my style, it’s not what I like, and it makes me uncomfortable. But I see how much it excites this other 60% of the shul.’”

All of these experiences helped build the foundation for the synagogue’s next conversations about the Devorah Scholars, he said, “because we had an experience to compare with, as opposed to some imaginary thing that could be kind of fearful to people.”

The mission of the Devorah Scholars dovetails with that of Micah Philanthropies, which is based in western Massachusetts and run by husband and wife Jeremy and Ann Pava. (Coincidentally, the Pavas’ daughter and daughter-in-law are both also named Devorah.)

Micah Philanthropies is also named after the biblical book of the same name, which contains a verse that is integral to the foundation’s approach, Ann Pava told eJP, quoting, “‘He has told you, O man, what is good, and what the Lord requires of you: Only to do justice, and to love kindness, and to walk humbly with your God.’ We try to really put that front and center of everything that we do,” Pava said.

Pava said that the initiative is meaningful to her in part because in her experience, people often feel more comfortable consulting with someone of the same gender.

“It takes away the embarrassment factor,” she said. “There are some things that in a million years, me or other women like me would not go to our rabbi with a question [about]. But you wouldn’t hesitate to go if there was a woman who you could confide in.”

Another important role for women clergy, she said, is to provide a welcoming and caring community on the women’s side of the mechitza, which she said can feel neglected.

“There is this incredible sense of camaraderie that goes on in the men’s section,” Pava said. “The rabbi says hello to everybody when they come in, and the gabbai says, ‘Would you like an aliyah today?’, and people shake your hand. And the women come in and they’re sort of sitting by themselves in the back.”

Her synagogue, the Young Israel of West Hartford, Conn., now employs  Ruthie Braffman Shulman, a Devorah Scholar from the first cohort, as the inaugural Young Israel community scholar and yoetzet halacha (or Jewish legal advisor). Braffman Shulman “greeted and shook hands and welcomed everybody as they walked in, in the same way that men are getting welcomed when they walk into a shul,” Pava said. She added that when there are female clergy on the women’s side of the mechitza “to sing with you and to celebrate and to talk to your family members, and to tell everybody what page you are on… it makes a huge difference. And I never thought about it until I saw what a difference it made once it was happening in synagogues.”

Braffman Shulman, who studied in Yeshiva University’s advanced Talmud program, remembers similar incidents at other synagogues where she worked. At one, she encouraged a newly engaged woman and her family to dance in celebration, mirroring the dancing already underway on the men’s side of the sanctuary. At another, she made sure the chairs in the women’s section were rearranged to make their side less cramped. “The women were being left out, or their comfort was not considered,” she told eJP.

Braffman Shulman added that serving as a female clergy member “can be very lonely work,” but said that the Devorah Scholars program provided a natural community of colleagues to confer with and share ideas.

“Usually we’re working in a heavily male space and I do talk to and bounce ideas off of other male rabbis, but not other women in this area,” she said. “Having the Devorah scholarship was so lovely, to have a women’s cohort to talk about similar issues that we might be going through, challenges and the ups and downs and sharing our successes as well. It was a wonderful resource for connection, support and networking that previously I really didn’t have.”

When Beth Sholom applied for the Devorah Scholars program, the congregation had grown to about 90 families, and Dolinger — who was “not quite full-time,” in his words — needed help. When the synagogue board found grant money for a staff position — together with funding from the Devorah Scholars — synagogue leadership was able to persuade people who might have felt lukewarm about the idea of women’s leadership to approve the hire because it provided help for Dolinger.

The synagogue has concluded its term with the Devorah Scholars program, but is keeping the female clergy position it created, Dolinger said. The leadership found a family to endow a part-time women’s clergy position for the synagogue moving forward.

The synagogue began hosting women’s megillah readings, has called women to the Torah on Simchat Torah and more.

“While the female clergy we’ve brought to the synagogue have connected with all our members, in particular they’ve served as new models of leadership to the women and girls in the community,” said Doidge, the synagogue’s immediate past president. “Our female clergy have invigorated our women’s ritual experiences, and propelled us to create new and meaningful rituals for women in an Orthodox setting.”