The life of Henrietta Szold, a pioneering feminist Zionist

This article first appeared on JewishInsider.com.

Israeli professor and historian Dvora Hacohen was looking for a comprehensive biography of Henrietta Szold. When she couldn’t find one, she decided to write it herself. 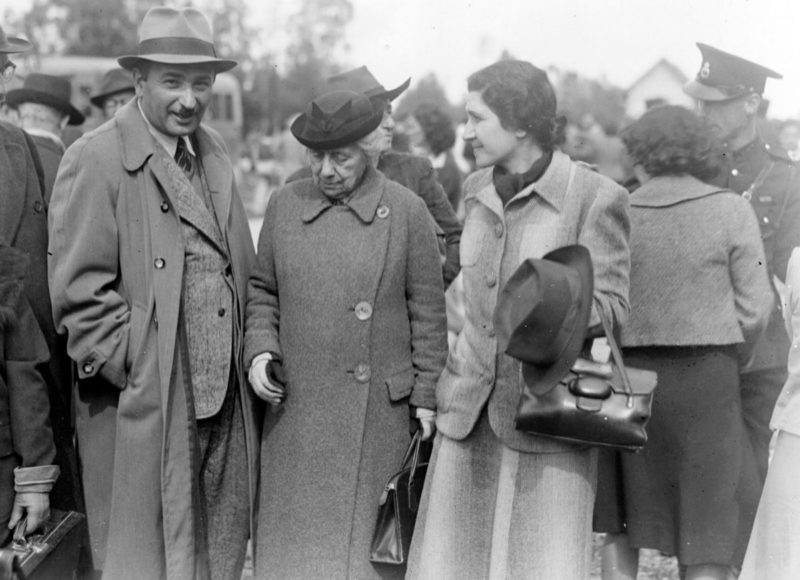 Henrietta Szold and Eliyahu Dobkin await the arrival of the first group of the "Tehran Children" in Atlit on February 18, 1943. Credit: Zoltan Kluger/GPO

“How come, the question is, that by now, no scholarly biography of Henrietta Szold was written by any of the thousands of researchers in America?” Hacohen asked Jewish Insider in a recent interview from her home in Jerusalem. “She was the most famous Jewish woman in the 20th century in America — the most important, the most admired.”

Hacohen’s resulting book was first published in Hebrew in 2019 and then translated to English by Shmuel Sermoneta-Gertel, published last week as To Repair a Broken World: The Life of Henrietta Szold, Founder of Hadassah.

Hacohen, 84, a professor of modern Jewish history at Bar Ilan University, has written and edited nine other books on Jewish history. She dove straight into the task of researching and writing about Szold, whose leadership and trailblazing path she greatly admires.

“She had a set of values that she would not give up in any way, and she had to fight so many fights with other people” in order to maintain them, Hacohen noted.

Szold was born in Baltimore in 1860, shortly before the outbreak of the Civil War. From a young age she pursued educational and professional paths that were normally closed off to women. She became the first-ever female editor at the Jewish Publication Society, the first woman enrolled at the Jewish Theological Seminary (though she had to promise to not seek ordination) and the only female member of the Federation of American Zionists’ executive committee. She died in 1945 in Jerusalem at age 84, “a life bounded by two wars,” wrote Hacohen.

In her early years, Hacohen said, Szold “suffered the exclusion of women and she didn’t fight against it, she didn’t protest, she accepted what she suffered.” But later in life, she became a much more strident feminist, and “one of the greatest fighters for the rights of women, and this she did by herself.”

Later, Szold also became a passionate and outspoken Zionist, and the founder and first president of Hadassah, the now-sprawling women’s Zionist organization. In 1933, at age 73, Szold relocated to Jerusalem and became an active driving force behind Youth Aliyah, the organization that rescued 30,000 Jewish children from Nazi Europe.

“She went to see the children herself; she went at least three times a week,” notes Hacohen. “She would leave Jerusalem very early in the morning and go from one place to another, spend a few hours at each place. She spoke to the children, the counselors… she took care of the children. She didn’t just leave it to others.”

Though Szold never married or had children of her own — to her great regret — she became known as such a maternal figure in Israel that the country’s Mother’s Day is marked on the anniversary of her death, “because she was called the mother of Youth Aliyah.”

Hacohen spent several years researching and writing To Repair a Broken World, which stemmed largely from her work on her last book, which focused on the Youth Aliyah. Her research this time around took her to Baltimore, where Szold lived for the first 40 years of her life, as well as Cincinnati, home of the American Jewish Archives. Hacohen also met with the descendants of Szold’s sister, Bertha — the only of Henrietta’s siblings to have children.

“It was wonderful to hear them talking about the family — stories that nobody knows and nobody talks about outside of the family,” she said. “They took me to the places where they’d lived in Baltimore, the synagogue where Henrietta’s father was the rabbi for many years.”

Hacohen also dug deep into Szold’s personal writings, including letters she sent to family and friends. There she discovered one of the strongest motivating factors of Szold’s life of philanthropy and activism: a broken heart.

“She suffered from an unrequited love that broke her heart,” said Hacohen. “She fell into a terrible depression” after her love for a younger professor at JTS was not returned. But after a few months, “she made a dramatic decision to change her priorities. She decided to fight the exclusion and discrimination of women, and for equal rights for all people.”

Szold’s most long-lasting legacy is undoubtedly the founding of Hadassah, laying the foundation for the hospital system and the extensive women’s organization that remains prominent today. Szold started Hadassah more than 20 years before she moved to what was then the British Mandate of Palestine.

“Today Hadassah is one of the largest Jewish organizations in the world, with hundreds of thousands of members,” noted Hacohen. Szold was “an ardent Zionist,” who first visited Palestine in 1909. The poverty and disease she saw during that trip spurred her to dedicate the rest of her life to the welfare and health of the Jews living there, through extensive health clinics, medical training schools, soup kitchens, educational institutions and much more.

And Szold’s value system, Hacohen said, can be traced back to her early years in Baltimore, leading night schools for immigrants of every age, religion and country of origin.

“This was a signature part of her leadership style,” said Hacohen. “This provided the impetus to establish Hadassah. She was driven by a sense of mission, fighting against the exclusion and discrimination that she experienced during the first half of her life. What remained consistent was her lifelong commitment to the concept of tikkun olam, repairing the world.”

The book opens with an introduction from the late Supreme Court Justice Ruth Bader Ginsburg, who penned the foreword in January 2020, months before her death. Bader Ginsburg — who spoke of Szold often — noted her admiration for Szold’s “notable sensitivity and keen insight,” and Hacohen for compiling a “treasure trove of the kind Szold’s story well deserves.”

“I wrote her a letter, and I asked her why did she mention her and what did she see in her,” Hacohen recounted of her initial outreach to Bader Ginsburg. “After a few days I got an answer… and she wrote me a beautiful letter about Henrietta Szold and how she was a role model for her and for her mother.”

And when Hacohen asked her to write a foreword for the book, “she answered immediately ‘yes,’” she recalled. “I was amazed” that she agreed, and also at her thoughtful approach, said Hacohen. “The way she looks at things, the way she explains things — is beautiful.”