Our sages have taught that we must recognize the joy and worthiness of every child and their individual educational needs. The root of the Hebrew word for education, hinukh, actually means inauguration. Just as early childhood educators set up meaningful learning opportunities that recognize children’s potential, we must urge our decision-makers to inaugurate a system, a permanent structure, that treasures each child and family.

In August of 2021, Anna Hartman wrote in eJP that Jewish values inform a call to action for robust investments in early childhood education. “The time for change is now,” she expressed as Congress considered the Build Back Better Act. Yet here we are, one year later, outraged, and still demanding action.

The time for change is now. Again. 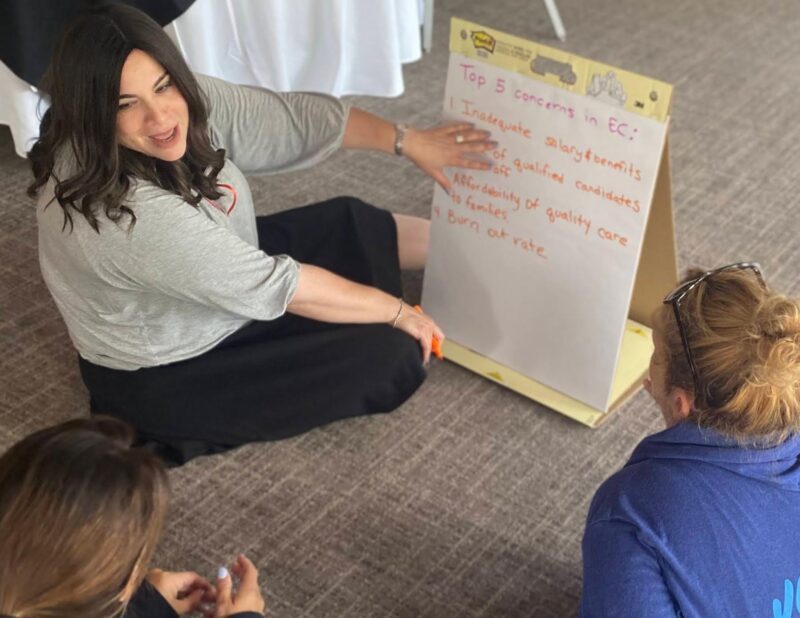 On Sunday, Aug. 7, the Senate passed the Inflation Reduction Act (a shadow of the Build Back Better Act passed by the House of Representatives in the fall and was never approved by the Senate). The historic legislation that passed through the budget reconciliation process includes tax reform and provisions for health care and clean energy.

Over the last several months, childcare and early learning advocates rallied and united in support of the proposal championed by Senators Patty Murray (D-WA) and Tim Kaine (D-VA) that would increase childcare subsidies, enhance quality of programs and improve staff wages. Although reduced from the original Build Back Better Act, these measures would ignite an increase in supply and demand, mutually benefiting children, families and the economy.

While the Inflation Reduction Act includes noteworthy legislation, childcare and early learning are noticeably absent. Lamenting this omission, Senator Bernie Sanders (I-VT) spoke on the Senate floor on Thursday, August 3, saying, “If you are a working parent right now, struggling to pay for childcare, this bill turns its back on you.”

Upsetting, yes. Surprising, sadly not. Our nation has a tradition of reluctantly addressing childcare in the wake of calamity without designs for stable, ongoing solutions. In 1940, it “took a bloody global war” and potential economic ruin for provisions to be made in The Lanham Act so that women (particularly middle-class white women) could get childcare to work in support of the war effort. When the war ended, so did the funds, leaving a nation in need of infrastructural transformation.

Similarly, it took a global pandemic to illuminate the essential role of childcare in our society and economy. The pandemic exacerbated the challenges of the childcare sector’s impracticable system of low revenue, unlivable wages, shortage of licensed childcare providers and insurmountable strain on families’ budgets.

During the pandemic, childcare programs experienced decreases in enrollment and financial insecurity. As of February 2022, childcare employment was still down 11% compared to the overall employment recovery of 2% of the pre-pandemic level. Parents and guardians (especially mothers) have left the workforce due to closures and lack of available and affordable care. Bipartisan support accounted for the billions of dollars in childcare relief allocated through various bills including the American Rescue Plan Act (ARPA). While this temporarily stabilized the childcare sector, ARPA’s short-term intentions are not enough (and were not intended to be) for permanent change.

Congress’s youngest constituents deserve high quality care to positively advance their development and learning. Childcare providers and early childhood educators deemed national heroes during the pandemic do not deserve to be abandoned and left to service a fragmented childcare system that is at the brink of collapse, nearing a $48 billion dollar fiscal cliff.

The situation is untenable. But the truth is, it always has been.

Childcare and early childhood education rely on the undervalued work of women, particularly women of color. Policy and funding are swayed by sociocultural beliefs and prejudices related to race, working mothers, poverty and the role of government in perpetuating the ideal of the nuclear family. As such, perceived as a threat to the institution of family in a post-Cold War landscape, the Comprehensive Child Development Act of 1971 was vetoed by President Nixon after passing both the Senate and The House of Representatives. Fifty years later, we are still advocating for federally funded, equitable, accessible, affordable and high-quality care and education for young children. Jewish values about social justice, children, family, and education inform our ongoing fight for bold, multi-year childcare investments. Judaism cherishes childhood as “a crown of roses.” Our sages have taught that we must recognize the joy and worthiness of every child and their individual educational needs. The root of the Hebrew word for education, hinukh, actually means inauguration. Just as early childhood educators set up meaningful learning opportunities that recognize children’s potential, we must urge our decision-makers to inaugurate a system, a permanent structure, that treasures each child and family.

As an advocate, I carry with me the wise distinction between optimism and hope according to Rabbi Jonathan Sacks (z”l): “Optimism is the belief that things will get better. Hope is the faith that, together, we can make things better.” Hope and collective action are needed to effect change. While childcare and early learning investments were left out of the final reconciliation package, we remain hopeful and committed to solving the childcare crisis. As Senator Patty Murray (D-WA) bemoaned on the Senate floor, “I’m deeply disappointed that Congress has failed to meet this crucial moment … I am not going to stop anytime soon … I am asking everyone here in Congress … We must make this a priority. We must address this surging crisis before it’s too late.”

And right now, it is not too late to implore Congress to “come together to craft smart bipartisan childcare policy,” according to Sarah Rittling, executive director of the First Five Years Fund, in a statement on the exclusion of child care in the final reconciliation package.

We continue to take action because the time for change is still now. But then again, it always was.

Ilana Dvorin Friedman, PhD, is the early child childhood policy analyst at the Jewish United Fund in Chicago. She is a member of Shma Koleinu, a collective of individuals dedicated to listening to and advocating for children, families and early childhood education.