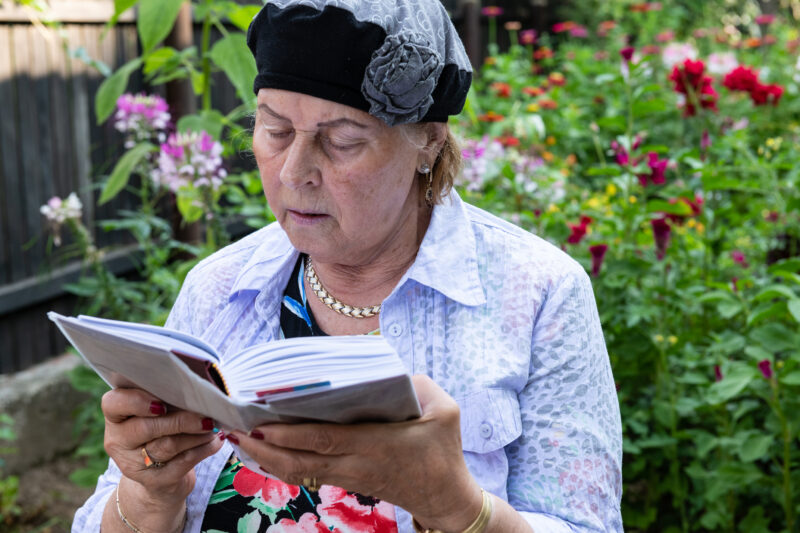 A Jewish woman reads her prayer book in backyard garden.

For Sarah Osborne, Jewish fast days were trying. She wanted to fulfill the mitzvah, but the long hours without food and water led to some health scares. Things shifted after she spoke with a supportive clergy member who told her: “Your mitzvah is to eat.” This gave Osborne the reassurance she needed to be able to protect her health by eating on fast days but left her feeling disconnected from her community and religious meaning.

In 2021, as Yom Kippur approached, she thought about what it would be like to have people to eat with. After eight years of keeping her experiences to herself, Osborne decided to speak out on social media.

“It was really hard at first because of the shame,” Osborne told eJewishPhilanthropy. “I thought maybe I’ll meet one person somewhere across the neighborhood that I’ve never met before [who] also eats. But what I found was that the people who needed to eat were kind of everywhere.”

Osborne wants to dispel the perception in the Jewish community that needing to eat on fast days is “very uncommon” unless you have a severe condition, such as an eating disorder. In fact, she says, there are many different reasons people may be unable to fast, reasons they may prefer to keep private. This could include being prone to fainting, balance issues caused by a stroke, trauma or other physical and mental health conditions.

Osborne launched A Mitzvah to Eat in December 2021, aiming to reduce suffering for those who are unable to fast, by bringing holiness and meaning by providing accessible content that is available year-round. This includes answers to frequently asked questions as well as prayers they created that didn’t previously exist for eating on minor fast days like the 17th of Tammuz (which was in mid-July) and Tisha B’Av (which falls on Aug. 7 this year). The initiative has already gained 500 followers between its Facebook and Instagram pages.

“Every person should have access to the same sources that the rabbis have and the clergy members when they’re counseling and supporting someone or even giving advice about whether they should fast or not,” Osborne says. “Once you look at the sources, it’s very supportive of that. These mitzvot are not meant to be harmful.” One example of this is the primacy of pikuach nefesh or saving a life shared on the initiative’s website.

A Mitzvah to Eat’s team includes three educators and three rabbis, based in the U.S., England and Israel. One of the educators, Laurie Scop, discovered Osborne’s post in a Facebook group for Jewish women.

“I remember sitting there looking at the computer and thinking, ‘Oh my God, she said it,’” said Scop. “Somebody went there and talked about this issue that affects a lot of people but that you don’t hear commonly spoken about.”

Scop immediately reached out to Osborne to learn more about her and others’ experiences and build a sense of community for people grappling with this issue. “It’s important to recognize that we’re people who want to do the right thing,” she says. “We’re ethical, we love our religion, we’re proud of being Jewish, we care about our community, we have a relationship with our God. And yet at the same time, what we are being told to do based on Jewish law, conflicts with what we know is in support of our well-being.”

Sharon Weiss-Greenberg, former executive director of JOFA, the Jewish Orthodox Feminist Alliance, told eJP about her distress when she saw a woman’s social media post 10 years ago about her and her child’s hunger pains. “She was posting how she wasn’t able to feed her child. And her child was screaming because of hunger, but how she was so close that she could finish [the fast].”

She says many people thanked her for the subsequent piece she wrote on the flexibility pregnant and nursing women have not to fast, as it had given them “social permission” to do what was best for the health of themselves and their children.

Rabbi Marianne Novak, part of the rabbinic team at A Mitzvah to Eat who ensures that the materials shared are accurate in terms of Jewish law, says that unless they receive rabbinic agreement around the need to eat on fast days, many people may hesitate.

“These are people needing to hear it because they care about halacha. They care about this as a way that guides their life. And it’s not enough to say to someone, ‘Well, you know, it’s to save your life, of course.’ And so, people will do this gruesome kind of math like, ‘Am I sick enough? Will I be sick enough? Do I qualify?’”

In Weiss-Greenberg’s view, rabbis should offer “blanket” support to community members in this situation rather than requiring one-on-one consultation for particular cases.

Novak stresses that a rabbi’s counsel is not a substitute for medical advice and that the doctor’s advice always comes first.

She says it’s critical that people are also provided with concrete strategies to make meaning of these fast days in a different way and structures to support them. An example might be to set aside a room in a synagogue where nursing mothers and others who need to eat can go, she says, which would still respect those who are fasting.

With Tisha B’Av, which Novak notes is a communal fast, drawing near, she advocates creating service projects, where everyone can get involved, whether or not they are fasting. In her view, this leads to “a broader thinking” of the purpose of these fasts.

Victoria Rothenberg, who lives next door to Osborne in Silver Spring, Md., discovered A Mitzvah to Eat on Facebook. Reading the initiative’s FAQs is helping Rothenberg, who is the director of the preschool division of Camp Gan Israel in Silver Spring, connect with Tisha B’Av, which she usually finds challenging, having been raised in a secular environment with no understanding of the destruction of the Temple that the holiday marks.

Learning about people’s experiences of exclusion from needing to eat on fast days also made her reflect on a larger question of inclusion: “Who else gets left out of things because of the way they were made?”

Rothenberg has shared A Mitzvah to Eat’s posts with her colleagues and children, including her 16-year-old daughter, who is currently working as a camp lifeguard to show her that “you can feed and nourish yourself in so many ways.”

Weiss-Greenberg agrees. “The grey [in the Torah] is there for a reason,” she says. “Keeping halacha also can mean eating as a chovah, as an obligation.” According to Weiss-Greenberg, A Mitzvah to Eat has created a much-needed space for people to express their struggles and then take action in a way that honors both their physical and spiritual needs.

For Osborne, a key purpose of A Mitzvah to Eat is to ensure people who are not able to fast on fast days know that even though they may not be in the majority, they matter. “We don’t have to do this by ourselves anymore,” she says. “We are now a community.”