biking for a cause 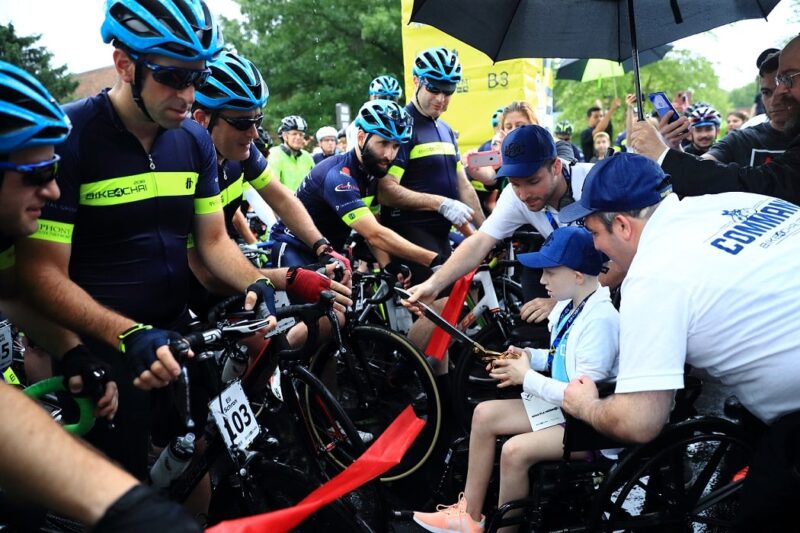 In 2009, a volunteer for Chai Lifeline, an organization that supports children who have life-threatening illnesses, walked into Rabbi Sruli Fried’s office in New Jersey with a request: Could the volunteer take his bike on the bus to Camp Simcha, Chai Lifeline’s overnight camp in the Catskills?

Fried, an employee of Chai Lifeline, said no. So the volunteer came up with another idea: “‘I’ll bike up to camp and raise money for Camp Simcha [and] Chai Lifeline’ – to which I said ‘you’re crazy,’” Fried told eJewishPhilanthropy. But to Fried’s surprise, the biker organized the ride and raised over $10,000. “The following year, some leaders in the Lakewood community…walked into my office and said, ‘You know, we were inspired by what Dovid did last year. And we feel that we’re onto something.’”

That’s how Bike4Chai, an annual cycling event and fundraiser that bills itself as the highest per-capita charity bike ride in the world, was born. This year’s event kicks off on Wednesday, Aug. 17, with a 50-mile endurance ride, with riders splitting across 60-mile, 85-mile, or 100 mile routes for the main event that finishes at 5 p.m. at Camp Simcha.

This year, the event includes 648 bikers who have raised over $12 million in both small donations and gifts from businesses and charitable foundations. Capital One, New York Community Bank, and Eagle Rock Properties are among the donors.

The event’s scale – organized by a year-round team of eight employees and hundreds of volunteers – is a far cry from the roughly 40 riders who started the charity ride in 2010.

Fried, now Bike4Chai’s executive director, attributes the growth to the immediate feeling of impact that riders have for their fundraising. The ride ends at what organizers call “the world’s greatest finish line” in Camp Simcha itself, where riders and volunteers see campers, some of whom face debilitating illnesses, can enjoy a summer of fun and care.

“When you ride…and you come into the camp, and you see your charity dollars at work, that really goes to the nature of why people are so passionate about it,” Fried said. “It also goes to the core of who we are as a people and Jewish philanthropy.”

Putting on Bike4Chai is a logistical feat, depending as much on staying organized as luck with the weather. Many traditional parts of a cycling event are upgraded, with rest stops, for example, having volunteers that play music and cater hot food, alongside the necessary water bottle refills and ice towels to keep riders cool.

Attention needs to be paid to “your rest stops, your mechanics, your medical support teams, those that do the road ops to make sure that the roads are safe,” Fried said. “We’re working on the route and working through townships throughout the year.”

Jews of all denominations and various communities are involved in the race, with one team of bikers representing the Sephardic Syrian community.

“The beauty of Bike4Chai is it has every level fundraiser, every level rider, from riders that are casual riders…[to] the riders that are literally professional cyclists,” Fried said. “That’s the Jewish unity in this ride, and people love it. That’s why we sell out literally right when we open up. Because it’s an incredible event.”