Though it pitches itself as a socially conscious investment opportunity, Coral Vita will also rely on traditional philanthropy to cover its startup costs. 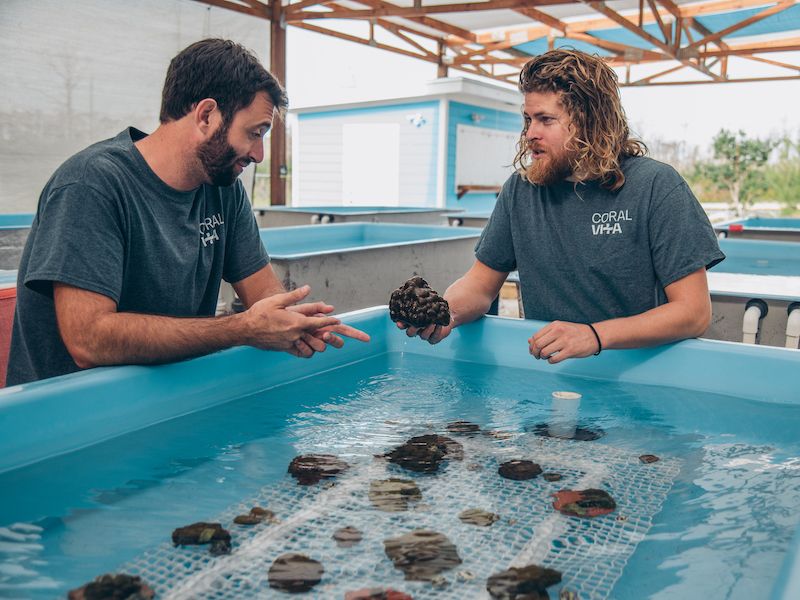 Sam Teicher (left) and Gator Halpern with their farmed corals.

When he was 13, Sam Teicher asked for, and got, an unusual bar mitzvah present: scuba certification.

Teicher’s father was a scuba diver, and the younger Teicher wanted to explore the seas alongside his dad. Nearly two decades later, that love of the ocean, along with the Jewish imperative to make the world a better place, has taken Teicher, 32, far from his hometown of Washington, D.C., and has helped motivate the creation of a business with a budget of $1.2 million and the goal of making a profit while saving the world’s coral reefs.

Coral Vita, which Teicher and his Yale University classmate Gator Halpern founded in 2019, is based in the city of Freeport, Bahamas, and works to grow coral reefs that are at risk of extinction. Last year, the company was one of five winners of the inaugural Earthshot Prize, an award of GBP 1 million (about $1.1 million) started by the United Kingdom’s Prince William to fund environmental innovation. Along with saving reefs, Teicher wants people to start paying more attention to them.

“They, along with the ocean, are often out of sight and out of mind,” Teicher, the company’s chief reef officer, told eJewishPhilanthropy on the sidelines of the Earthshot Prize Innovation Summit on Wednesday, which was hosted in New York City by Bloomberg Philanthropies, one of the prize’s funders. “I’ve been inspired by coral reefs, have seen them die, and they’re dying in front of our eyes now.”

According to a study last year by the Global Coral Reef Monitoring Network, coral reefs support a quarter of marine life, as well as industries collectively worth $2.7 trillion per year — such as fisheries and tourist sites. They also help reduce the magnitude of waves. But the report says up to 90% of reefs are at risk of extinction.

Coral Vita hopes to reverse that trend through a procedure called micro-fragmentation, which involves cutting fragments from at-risk reefs into even smaller pieces, and then farming them in nurseries on land before they’re again planted in the ocean. The company says this process allows the reefs to grow up to 50 times more quickly than they would through traditional methods, allowing Coral Vita to grow a greater diversity of species.

“A key part of it comes back to Sam and I both having a deep passion and love for the ocean and the ecosystem that thrives in healthy oceans,” Halpern, 32, a San Diego native who serves as Coral Vita’s president, told eJP. “Even in our relatively short lifespans we’ve witnessed the ecosystem changing in dramatic ways… We decided that these issues are so urgent that we need to directly address them.”

Coral Vita is a for-profit company that seeks out clients who have an interest in maintaining healthy reefs, from governments to hotels to diving sites or conservation groups. At present, two of Coral Vita’s clients are the Bahamian government and the Grand Bahama Port Authority. At an Earthshot conference event, Halpern said working with the governments of small island nations is easier than with United States municipalities because there’s less regulation to contend with.

The company, which has 17 employees, is hoping to grow beyond the Bahamas. At the Earthshot event, Halpern said one of Coral Vita’s next projects will be close to Israel.

“We’ve been spending a lot of time in the Middle East recently,” he said. “We’re looking at where we’re going to build other farms. The Saudis are investing heavily in reef restoration and conservation. We’re starting to work with them to develop their strategy on restoration of the Red Sea.”

Though it pitches itself as a socially conscious investment opportunity, Teicher said Coral Vita will also rely on traditional philanthropy, like the Earthshot Prize, to cover its startup costs. The company has also launched a partnership with Corona, the brewery, which is sponsoring the restoration of a reef and soliciting donations to that end.

“We’re on a journey to create an industry around reef restoration, and in time we hope that the industry will be able to support hundreds of millions or billions of dollars of investment into the space each year,” Teicher said. “But to get there it’s a bit of a chicken and an egg issue, and so I think there’s a critical role for philanthropic investment to play in order to enable the development of the kinds of solutions we’re creating.”