eJP's weekly project invites thought leaders from varying backgrounds to read the weekly Torah portion through the lens of philanthropy. We hope this space provides new ways of reading the parsha and valuable insights into how our texts teach us — through statements, suggestions or character behavior — about supporting those in need, donating a portion of our income or giving of ourselves in acts of generosity toward our fellow humans.

In the Torah portion known as Achrei Mot, there is a seemingly strange instruction. “For the soul of the flesh is in the blood, and I have therefore given it to you [to be placed] upon the altar, to atone for your souls. For it is the blood that atones for the soul” (Leviticus 17:11). In other words, we are being commanded to spread blood onto the altar.

Why is it strange? Because five verses later, we receive another instruction ,which has become one of the most important tenets of kashrut: We cannot eat any animal that has any blood. So we must sprinkle blood upon the altar – but we cannot eat any of it. What is going on? 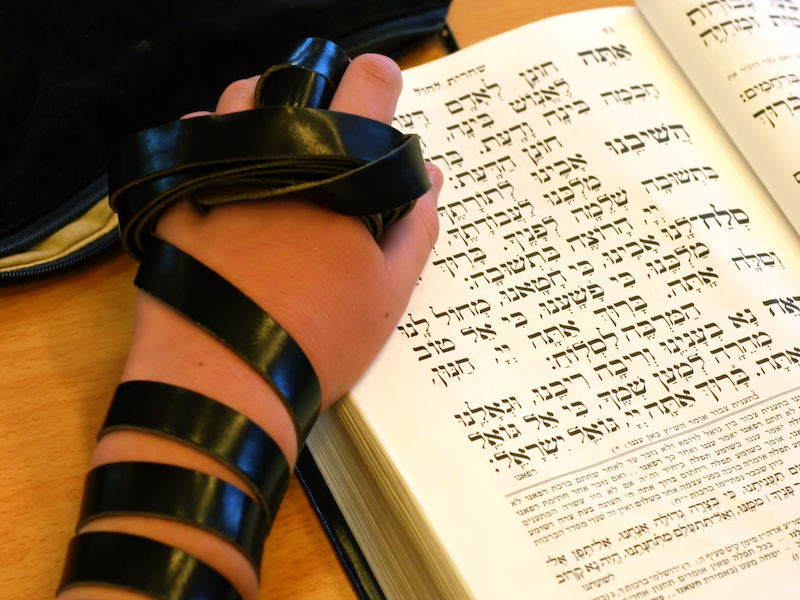 As always, the Lubavitcher Rebbe has a remarkable insight on this. He said that the blood, being warm, symbolizes enthusiasm. We are forbidden to imbibe it – to become enthusiastic about our own desires, needs and selves. Instead, we are required to apportion it for worthy things – like the sacred altar, which symbolizes our divine mission and purpose. In the modern age, giving tzedakah is one way to spread sacred enthusiasm, and two Biblical verses from another parsha offer additional insight on the verse from this week’s parsha.

In Deuteronomy 6:16, God says: “Do not test the Lord your God…”  But there is an exception. In Malachi 3:10, we read: “Bring the whole tithe into the storehouse, that there may be food in my house. Test me in this,” God says, “and see if I will not throw open the floodgates of heaven and pour out so much blessing that there will not be room enough to store it.”

Giving tzedakah is so important that it qualifies as the Biblical exception to the prohibition on testing God. The spirit in which it is given is also important. In Deuteronomy 15:10, the Bible says (presaging the guarantee of Malachi 3:10): “You shall surely give him [the poor], and let your heart not feel bad when you give him, for in return for this matter, Hashem your God, will bless you in all your deeds and every undertaking.”

Giving with enthusiasm, as the Rebbe extracted from Leviticus 17:11, means giving happily — and more!  When we are enthusiastic about something, we want to share our enthusiasm about it. This is the case with an achievement by our child, a victory for our team, a speech by our candidate, anything. We only have to look at social media to see frequent examples of this phenomenon.

In Leviticus 16:1, the Bible tells us: “Hashem spoke to Moses after the death of Aaron’s two sons, when they approached before Hashem, and they died.” These two sons were Nadav and Abihu, who died as a consequence of bringing a “strange fire” unto the altar. For thousands of years, commentators have been asking, why does the Author of the Torah again remind us of their deaths – when their deaths occurred in parshat Shemini, which we read several weeks ago?

One of the ancient explanations is that storytelling is a classic example of how God speaks in the language of man. We sometimes think with data, numbers and pure calculation – but we always think in stories. As Elie Wiesel wrote, “God made man because God loves stories.” And so do those created in His image – each of us.

Why would God insist on placing us in the context of the story?  We learn in Bamidbar Rabbah that there are seventy faces to the Torah – teaching us that there are multiple interpretations to every passage, each of which can be different, true and even new. One interpretation is that invoking the memory of Aaron’s two sons here brings them back into our active memory to remind us of the seriousness of lighting a strange fire – as we consider the laws and rules that will follow in Leviticus.

A complementary interpretation derives from the possibility that Leviticus 16 might effectively provide a commentary on Leviticus 17. We are, per the Rebbe on Leviticus 17:11, to sprinkle blood upon the altar to demonstrate our enthusiasm for sacred things. But do we extend the Biblical metaphor and example of sprinkling blood into our lives?  The “how” is, as always, crucial: a desire to do something enthusiastically is only meaningful if it is joined by effective execution.

In 2014, the charitable organization Freedom From Hunger (in conjunction with Professor Dean Karlan of Yale and Daniel Wood of Clemson) conducted an experiment with its donor list. Half of its list received an appeal with only an emotional appeal (in the form of a story) and half received the emotional appeal joined by rational analysis (about the effectiveness of the organization). The results: those who were loosely committed (those who gave less frequently and significantly) gave less when the emotional appeal was joined with rational analysis. But the committed donors (those who gave more frequently and significantly) gave more when the story was joined with data.

The teaching, from the data and from the Torah, on how to engage others in a sacred task suggests that we begin with the story. Share examples and stories that illustrate how the sacred work is saving real lives, alleviating genuine pain and increasing important opportunities. When the heart is opened by the story, the mind is ready to process the data and facts that can deepen the inspiration and augment the generosity. Then, the enthusiasm for sacred things that we are commanded to express in this week’s parsha can be best brought into the world.

Mark Gerson is the co-founder of Gerson Lehrman Group, and has been the founder and/or seed investor in companies in a variety of industries. He is the co-founder and Chairman of United Hatzalah of Israel, the crowd-sourced system of volunteer first response that enables Israelis to be treated within the moments separating life from death following any medical trauma. He is also the co-founder and Chairman of African Mission Healthcare, which enables Christian medical missionaries to provide clinical care, training and medical infrastructure for people throughout Africa. A graduate of Williams College and Yale Law School, Mark Gerson is the author of books of intellectual history and education including the national best-selling book “The Telling: How Judaism’s Essential Book Reveals the Meaning of Life. His articles and essays on subjects ranging from Frank Sinatra to the Biblical Jonah have been published in The New Republic, Commentary, The Wall Street Journal and USA Today. Mark hosts the popular podcast, “The Rabbi’s Husband,” and teaches Bible to Evangelical leaders through Eagles Wings. Mark is married to Rabbi Erica Gerson. They and their four children live in New York City.