Owned by Roman Abramovich, the team also works to rehabilitate racist fans rather than ban them 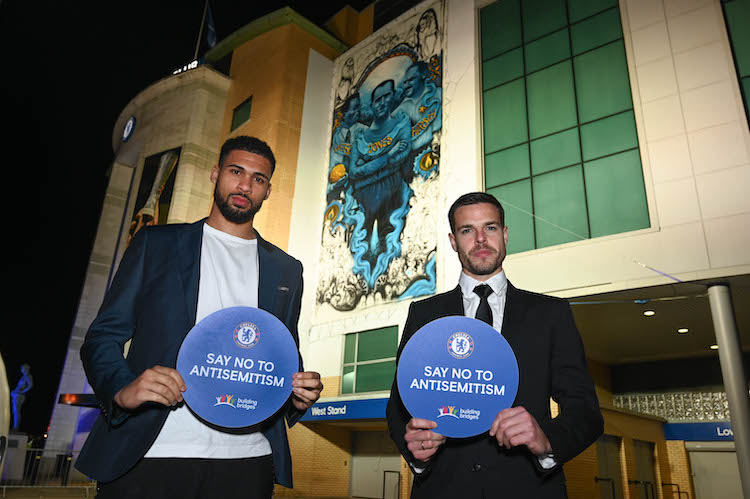 Chelsea FC: It’s an iconic soccer club in London, more than a century old, known for its stadium (Stamford Bridge), best-ever midfielder (Frank Lampard) and rivalries with Arsenal and Tottenham Hotspur. Yet the club, owned since 2003 by Russian-Israeli billionaire philanthropist Roman Abramovich, also makes headlines outside the sports pages for the charitable activities of its foundation. The club is increasingly working on the issue of antisemitism, Bruce Buck, the American-born club chairman, told eJewishPhilanthropy in an interview about Chelsea’s plans to bring its “Say No to Antisemitism” program to the United States, in a partnership with the Anti-Defamation League that was announced in July.

Helen Chernikoff: Can you tell us the origin story of the “Say No to Antisemitism” campaign?

Bruce Buck: The Chelsea Foundation does all kinds of community activities from helping the elderly to fighting poverty. We try to leverage football — you call it soccer — for the good of society. So over the years, we’ve done all kinds of anti-discrimination activities. In terms of “Say No to Antisemitism,” the campaign started about four years ago. We’re lucky in that we have an owner who is quite willing to support, financially and with his enthusiasm, all of our anti- discrimination activities, and particularly antisemitism, because he’s Jewish.

HC: Was there some kind of turning point that motivated the antisemitism campaign in particular?

BB: The impetus for that was the rise in antisemitic activity. There was the attack on the supermarket in Paris, on the synagogue in Pittsburgh. Antisemitism was growing on social media. We said, ‘We have to try to do something about it. Can we just figure out a way to move the needle?’ We have a very unique asset with this football club. Clubs like ours really get people’s attention. They get a lot of media focus. They get a lot of fan focus. Once we have their attention, it’s up to us to utilize it in the right way. We have hosted a number of events with our fans, including inviting Holocaust survivors to share their stories. The men’s and women’s team have also all met with survivors as part of this work.

HC: Does your general anti-discrimination work and your campaign against antisemitism have any connection to racist incidents among soccer fans?

BB: There are these problems in football stadia all over Europe. The number of those problems has gone way down since the 1980s, but they still exist. We try to deal with them, of course, but the 40,000 people in our football stadium are just reflective of society. Yes, we have this problem, but so does the society. We used to ban a fan who misbehaved, whether it was antisemitism or another form of discrimination. We could ban them from the stadium for three months, or six months, or life. We came to the conclusion that it wasn’t the right way to approach things. If you ban them for life, you probably confirm that they’re an antisemite for life. Now we’re focused on education. We have a diversity officer, and if the fan can meet with the officer, and come to grips with the fact that they’ve done something wrong, and do some education, they can come back. That’s been well-received by both the person and the fans who saw the incident. This was developed with the Holocaust Educational Trust in the U.K.

HC: Chelsea is a London club. Why do you have your sights set on the United States?

BB: We have large fan bases around the world. We have always done a lot of community activities, and we have always done them outside the United Kingdom. We’ve had four or five big projects in the United States already. Mr. Abramovich and Robert Kraft, who owns a Major League Soccer team, had a charity match in the United States. It raised about $4 million that was given to groups that fight antisemitism. We work with the ADL; we support [its] Center on Extremism and have had conferences like them. We’ve worked with the World Jewish Congress, and we have done a number of events at the NYU Tisch Institute for Global Sport. We’d like to do more in the U.S., and we’re trying to help other sports clubs to do similar things. We’re not trying to get credit. We’ll share anything we can with other teams.

We also work globally. For example, we took our coaches to Israel. We have a partnership with the Peres Center for Peace and Innovation. We spent a few days with Israeli Jewish and Israeli Arab children playing and learning the sport together. These are 10-year-olds. Discrimination is something that’s not in your genes. You learn it. If we can work with young people, maybe we can move the needle a bit with them, too.

HC: How do you measure the impact of this work?

BB: One of our biggest challenges is how we measure whether what we are doing is making a difference. It’s difficult, if not impossible, to do that. There aren’t any metrics, but the general feeling is that discrimination in society is increasing, not decreasing. We know our fans support this anti-discrimination work because they tell us, and they want to participate. We can’t say that we’ve decreased antisemitism by 2.5% in London; it doesn’t work that way.

We also do a lot of work through our social media channels. We partner with experts to develop content that fights discrimination and antisemitism that we think our fan base will engage with. One of the largest Chelsea fan club podcasts is in the U.S. It’s called “London Is Blue,” and they’ve had several episodes now speaking about antisemitism. That’s rare. People who are focused on sports are usually talking about the game.