Robots at the Seder table? Training ourselves to be in community again

Tell me honestly: Are you anticipating your Passover seder with excitement or dread? Do you really want to meet all your long-lost relatives, or would you rather have seder with only the three people you like best? In the amusement-to-annoyance scale, where are Uncle Mort’s obnoxious comments going to land? What’s your patience level for those that say the seder is “too long” or the classic “can we eat already?”

If you find yourself less inclined to deploy the patience needed to deal with other people, you are not alone. In fact, you are part of society-wide decline in the ability, opportunity – and desire – to connect with others. Let’s face it: We do miss physical proximity, but we also understand, more keenly than ever, what Jean-Paul Sartre meant in his famous phrase, “Hell is other people.” 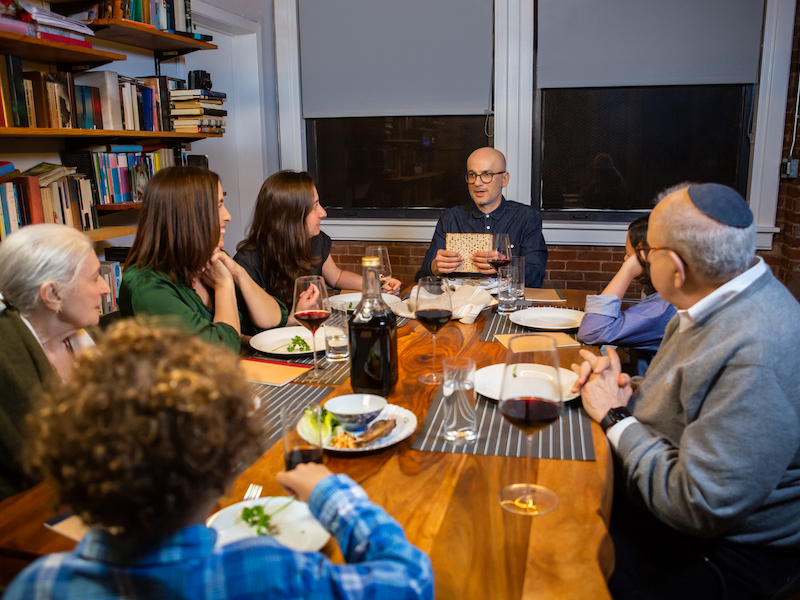 Even before the COVID-19 pandemic, humans were moving towards isolation, and loneliness was becoming one of our era’s biggest problems. In The Lonely Century: How to Restore Human Connection in a World That’s Pulling Apart, psychologist Noreena Herz shares some shocking statistics. Even before the social distancing of the pandemic, “three in five US adults considered themselves lonely,” she writes. “Almost a third of Dutch nationals admitted to being lonely, one in 10 severely so. In Sweden, up to a quarter of the population said that they were frequently lonely. In Switzerland, two out of every five people reported sometimes, often, or always feeling so. One in eight Brits did not have even a single close friend they could rely on, up from one in 10 just five years before.”

We are, in fact, in a vicious cycle of loneliness and isolation, heightened by the impact of shutdowns and “virtual meetings.” We are lonelier than ever, and that atrophies the “muscles” that we use to relate to others: politeness, kindness, tolerance, empathy and patience. Indeed, loneliness breeds more loneliness. Unsurprisingly, social anxiety diagnoses were increasing steadily before the pandemic, growing five percent every year. People simply don’t know how to be among others. Loneliness is not only creating mental health problems, but physical health problems. It’s said today that loneliness is the new smoking.

There are many causes for this loneliness epidemic and for our declining ability to connect with others. Our smartphones, computers and social media apps are deliberately designed to eliminate the need for human interactions, but there’s more. Our hypercompetitive world of “greed is good” and prioritization of financial success over character turns every other human into a competitor, somebody to crush as we climb up the social ladder. Self-reliance is good, but the feeling that “I have to take care of myself because nobody else will” is a recipe for despondency. Our cities – where close to half of us live alone – are designed to minimize interactions between people, and we’ve steadily defunded those spaces of encounter, from public libraries to community centers, to parks. In the U.K., for example, a third of youth clubs and nearly 800 public libraries were shut down between 2008 and 2018, while in the US, federal library funding decreased by more than 40% between 2008 and 2019. This matters, because those places were not just venues to meet, but places where we learned how to interact, how to be civil, how to be quiet when others are reading, how to wait our turn for the swing. They were laboratories that taught us how to peacefully coexist with people unlike us and how to manage different points of view. Kind of like your seder… But now, between our social media bubbles and our modern lifestyles, we can live our lives without confronting – or engaging meaningfully – with “the otherness of the other.”

The breakdown of personal relationships works in concentric circles. Community – an extension of our families and friends – is weakening too. Many researchers have linked the breakdown of community to the emergence of authoritarianism around the world. Even back in 1948, Hannah Arendt identified one thing Nazi supporters had in common: They were unmoored from communities, friends and families. They found in the tyrant a renewed sense of belonging and a license to be as selfish and cruel to others as their leader was.

Some have suggested radical solutions. In “Relationships 5.0,” Eliakim Kislev, a researcher at Hebrew University, proposes embracing robotic companionship for both romantic and platonic relationships. No more anguish about bad dates for the single, no more frustration with Uncle Mort at the seder. You can program your companions so that they agree with your politics and tell jokes you find amusing. No more snotty teenagers asking, “Can we eat already?” but respectful nephews and nieces who like the seder exactly as you run it. If your cyber mother-in-law criticizes your matzoh balls, you can just turn her off.

Sounds both tempting and horrible. The unpredictability of the other is what makes relationships challenging, but also what makes them valuable. In a world of perfect partners, something we can’t fully define would be irretrievably lost. And there’s something else: Robotic relationships require little of us emotionally; they are bought, not earned. But real relationships gain value from what we put into them, more than from what we receive.

Pesach is the festival of freedom, but it’s also – maybe even more so – the festival of community, in which togetherness plays a critical role. It’s not a coincidence because freedom is not, as the libertarian dystopians would have us believe, a solo experience. It’s rooted in relationships. Lonely freedom is like, in the words sung by Janis Joplin, “another word for nothing left to lose.”

Pesach is about learning to be free, but also about learning to be together. Historically, it was one of the three holidays of pilgrimage, in which the people congregated at the Temple in Jerusalem. In Pesach, the concentric circles of belonging were at play: We had the seder with our families, but we had to interact with people from the entire Jewish world in the small confines of Jerusalem walls. Pesach was about leaving Egypt, but also about coexisting in the “machaneh” (the desert camp), about being together at the foot of Mount Sinai to coalesce around a purpose and a mission, about creating a set of norms on how to live together and exist for a higher purpose.

The pandemic made our crisis of relationships worse, but it also gave us a unique opportunity for a reset. But the rosy scenario, of humans rediscovering the joy of togetherness will not happen on its own. We will not emerge out of the pandemic more tolerant, patient or civil.

This Passover, think about all this when Uncle Mort makes his annoying comments. Think of your seder as a microcosm of the community and the society we want to build. Think about the weakened muscles we need to exercise to live together again. Think how, through little interactions, we learn the skills to be part of something bigger. Ask yourself how we can relearn to be together, how we can treat one another with more tolerance and kindness, how we can regain a healthy balance between “me” and “we.” How we, as Jews, can relearn the art of being a people.

The miracle of Passover starts before the actual liberation from slavery. It begins with Moses, who “had grown up and went out to his brethren and looked on their hard labors.” First comes recognizing the other as brethren, even the annoying, the wicked and the simple; understanding that togetherness isn’t easy, but its alternative is a world of loneliness and violence. Only then, we be one with our fellows, can the miracle of freedom shine forth.