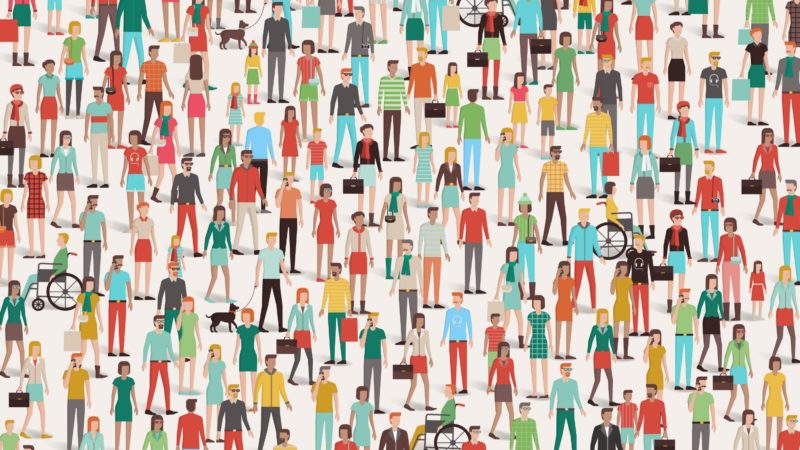 The first major survey of American Jews since 2013 finds a population that is growing and increasingly diverse both religiously and politically — to the point that some American Jewish communities feel they have no connection to others.

The 2013 study was received with distress by a number of leading academics and pundits who read it as an indication of apathy to Jewish life. Some see the new data as evidence that efforts to build Jewish community and identity outside the synagogue are working. Others see those efforts as fragile. The debate hinges on the question of how to measure Jewish vitality.

“This is corroboration that the Jewish community is growing, not shrinking, and that there’s diversity in how people express their identity and where they come from,” said Len Saxe, director of the Cohen Center for Modern Jewish Studies and the Steinhardt Social Research Institute at Brandeis University, and a consultant to Pew on “Jewish Americans in 2020.”

The survey, released Tuesday, found that 92% of American Jews identify as white, while 8% say they identify with another ethnic group, including 1% who identify as Black, less than 1% who identify as Asian and several other groups and combinations of groups who comprise 1% or less of the total. This data shows a 1% increase in the population that identifies as non-white, compared with the 2013 report. In 2019, the Jews of Color Field-Building Initiative estimated that 12% to 15% of the American Jewish population was Jews of Color. Other estimates, including one by Saxe that put Hispanic Jews who identify as white at 6% and all other racial groups at 5%, and another published in the 2019 American Jewish Yearbook that indicates Jews of Color make up 6% of the population, are more in line with Pew’s numbers.

“It’s important for the demographers to figure this out, and be in conversation about it,” said Amy Asin, the Union for Reform Judaism’s vice president and director of strengthening congregations. “But for us, it’s not about whether it’s ‘X’ percent or ‘Y’ percent. There’s no threshold number that we’re looking for. The range is important.”

Michelle Shain, the assistant director of the Orthodox Union’s (OU) Center for Communal Research, read the new report differently from Saxe. She sees American Jewry’s robustness in Orthodoxy, and especially in the study’s findings on younger Jews. The report shows that among Jews ages 18 to 29, two populations are growing: those who describe themselves as atheist, agnostic or “nothing in particular,” who comprise 40% of that group, compared with 27% of all adults, and those who identify as Orthodox, who are 17% of that group, compared with 3% of Jews 65 and older. Shain also served as an advisor on the study.

“On the one hand, you see a growing and self-confident Orthodoxy, with distinctive Jewish attitudes in behavior that reflect commitment to Torah, and to God, and at the same time, you see a growing group of Jews of no religion,” she said. “Both of those groups seem to be growing as the generations continue, and those who identify with liberal movements appear to be declining.”

The study demonstrates the importance of Jewish parents’ attitudes and behaviors and has confirmed the OU’s focus on building programs and services for parents and families, the organization said in a statement about the study.

The gulf is also growing when it comes to politics, according to the study. Jews on the whole lean liberal, with 71% saying they were Democrats or tilting to the left, while “Orthodox Jews have been trending in the opposite direction, becoming as solidly Republican as non-Orthodox Jews are solidly Democratic.”

Yet in some ways, the 2020 survey shows that American Jewry hasn’t changed much since the 2013 survey was conducted, said Becka A. Alper, the study’s senior researcher, on a conference call Pew hosted for members of the media. She pointed out that the intermarriage rate, at 61%, is the same. The percentage of American Jews identifying as Reform – 37% — and Conservative —17% — are almost unchanged from 2013, as is the Orthodox share of the population, at 9%. The share of Jewish adults who don’t identify with any particular stream of Judaism is 32%, up only slightly from 30% in the 2013 survey.

Saxe said the diversity that characterizes American Jewry is strikingly evident in data showing that the population finds Jewish meaning in a variety of ways, including but not limited to traditional religious practice.

The 2013 survey established that many American Jews, especially younger ones, rarely attended synagogue, but didn’t explore why that was so, or whether that group connects with Judaism or a Jewish community in other ways. In designing the 2020 survey, the Pew team was careful to include such questions, said Alan Cooperman, Pew’s director of religious research, on the media call.

They found that of respondents who didn’t attend services, two-thirds said they stayed out of synagogue because they weren’t religious; 57% said they’re not interested and 55% said they express their Jewishness in other ways.

The survey also supplied other measures of Jewish engagement, some of which have traditionally religious components, such as sharing holidays with friends who are not Jewish, and some of which were more purely cultural, such as cooking Jewish foods.

It found that a quarter of Jews with a medium level of traditional observance cook and eat traditional food, for example, while 21% celebrate holidays with friends.

“Do we have to compare high to low?” asked Arielle Levites, managing director of the Collaborative for Applied Studies in Jewish Education, and another advisor on the study. “Why can’t we think about this as a different category of being Jewish and American that can be rich and meaningful?”

Saxe said the emphasis on synagogue attendance as the key metric of Jewish identity forces a Christian paradigm of religion onto being Jewish, which is an ethnicity and not just a religion.

“The issue for funders is how to create a Jewish network of programs and institutions that can sustain people’s involvement, however they would like to be involved,” he said.

Andres Spokoiny, CEO of the Jewish Funders Network, a service organization for philanthropists, said the data shows that investment in non-religious forms of Jewish engagement have been successful, but that there is more to do.

He cited Moishe House, the global housing organization for Jewish young adults, as an example of a successful engagement platform. What’s needed now is more “Jewish content” on such platforms, he said, such as Moishe House’s  acquisition of Hillel International’s Base Movement, which will facilitate interaction between residents and young rabbinic couples.

“Pew shows the success of the engagement program, but also the limitations,” Spokoiny said.

Shain pointed out that the people who participate most frequently in those Jewish activities that take place outside of synagogue also tend to be those who are the most traditionally religious.

For example, among highly observant Jews, 31% say they listen to Jewish or Israeli music, compared with 7% of those with a medium level of traditional observance.

“Those sorts of new observances don’t substitute for traditional observance, they complement it,” she said. “Other people do these things, but they do them less often, and with less frequency, and less intensity.”

Pew surveyed 4,718 U.S. adults who identify as Jewish, including 3,836 Jews by religion and 882 Jews of no religion, online and by mail from Nov. 19, 2019 to June 3, 2020. The respondents met the survey’s criteria for Jewishness if they said their current religion was Jewish, said that they consider themselves Jewish in another way, or said they were raised in the Jewish tradition or had a Jewish parent.

This definition is consistent with that of the 2013 survey; however, there is one big difference between the methodology of the two surveys. In 2013, Pew conducted the survey by phone instead of mail. That means the two studies cannot always be reliably compared with each other. The answers to some questions, such as how often people attend synagogue, tend to be significantly shaped by whether a respondent is talking to an interviewer or filling out a survey privately.

Pew conducted a separate study to ascertain which questions might be affected by how people take the survey. They found that the share of people who say they attend synagogue at least monthly was 11% higher among those speaking with an interviewer. Other questions susceptible to this effect include the importance of being Jewish in one’s life, the importance of religion in one’s life and how emotionally attached one is to Israel, Shain said.

Levites had another caveat for people reading the new Pew study, urging that it isn’t a crystal ball, but a snapshot.

“Sociology is not a good predictive science,” she said. “It tells us about trends right now.”