The Celebrate Israel Parade was dominated by thousands of children, while dozens of senior citizens were celebrated later in the day for volunteering with the Israeli army. 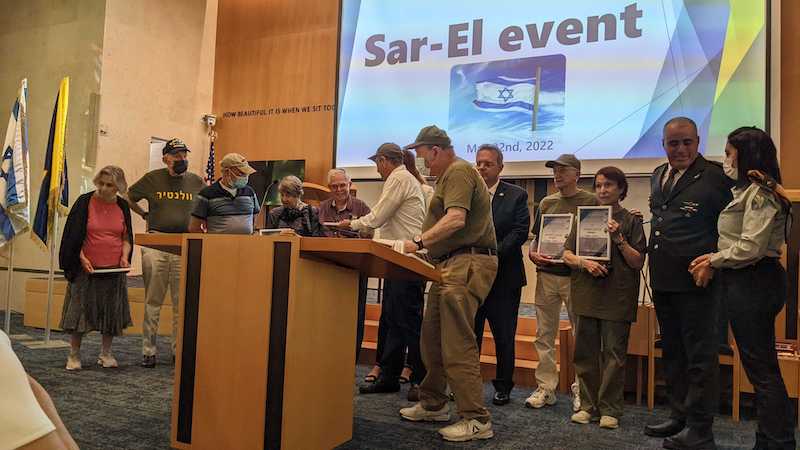 American Jews, including some older than 80, receive awards from Sar-El for volunteering repeatedly at Israel Defense Forces bases on Sunday, May 2, 2019 in New York City.

On Sunday in New York City, Jews demonstrated two ways of supporting Israel — on opposite sides of the generational spectrum.

Early in the day, the Celebrate Israel Parade was dominated by thousands of children, from elementary to high school, who filled Fifth Avenue as they marched in delegations from Jewish day schools across the country. Later in the day, dozens of senior citizens — some of them older than 80 — gathered in a synagogue on Manhattan’s East Side to discuss their experiences volunteering with the Israeli army.

The parade was the day’s main event, returning after a two-year pandemic-induced hiatus. Tens of thousands of marchers participated, according to the event’s organizer, the Jewish Community Relations Council of New York, as did a long list of dignitaries from New York City and state. But despite the masses of teenagers marching up Fifth Avenue in the nearly 90-degree heat, the crowds of spectators appeared sparse in some places, standing just one row deep along most of the first half of the parade route. Some sections of the sidewalk that were exposed to the sun stood empty.

Still, the attendees — whether they were inside or beside the parade route — appeared to have a good time. Marching bands punctuated the floats and student delegations. Some marchers threw swag to onlookers — stress balls, pins, frisbees and the like. New Jersey’s Yavneh Academy, a Modern Orthodox day school, created a parade float emblazoned with the logos of Israel’s most famous startups. Another float carried Nissim Black and Kosha Dillz, two Jewish hip-hop artists who rapped together.

A section near the beginning of the parade provided space to the de rigueur protest by Neturei Karta, the fringe anti-Zionist Hasidic sect. A group of non-Hasidic pro-Palestinian activists protested next to them. Following the parade, marchers and protesters could be seen relaxing near each other in Central Park, all trying to avoid the heat.

“It’s good to be back, it’s good to show our resiliency and the spirited energy of marching on Fifth Avenue,” Adams said in a video recorded while he was walking and holding an Israeli flag topped with a sign depicting a thumbs-up and reading, “We got this, New York.”

Shortly after the parade and a few blocks away, about 100 people gathered in the Conservative Sutton Place Synagogue to celebrate Volunteers for Israel, also known as Sar-El, which brings thousands of volunteers to Israel Defense Forces bases to do logistical work — packing bags of food, folding uniforms, refilling gas and more. About two-thirds of Sar-El’s volunteers are senior citizens, which the crowd at the synagogue reflected. Many of the attendees were older and came wearing green T-shirts bearing the word “volunteer” transliterated into Hebrew.

Though Sar-El recently restarted volunteer trips to Israel, it had a hard time during the beginning of the pandemic, when it was limited to recruiting Israeli volunteers domestically. Because volunteers pay their own way to Israel and live on military bases, the organization has few expenses and runs on a budget of $200,000. In 2021, when volunteers were not traveling to Israel, that number was halved, though it has now returned.

While speakers praised the volunteers’ labor, they also made clear that one of the program’s primary benefits is that it turns volunteers into “ambassadors” for Israel, in the words of one speaker. Tamano-Shata said, “Your dedication to Israel is our greatest national asset.”

“It serves the role of creating ardent Zionists, no matter what their background, with firsthand knowledge of the dangers Israel’s facing,” Blumenthal said in a speech. “It gives these individuals the facts they need to speak on our behalf.”