While Tel Aviv is known as a city of bikers, Jerusalem has become much friendlier to cycling since 2020. 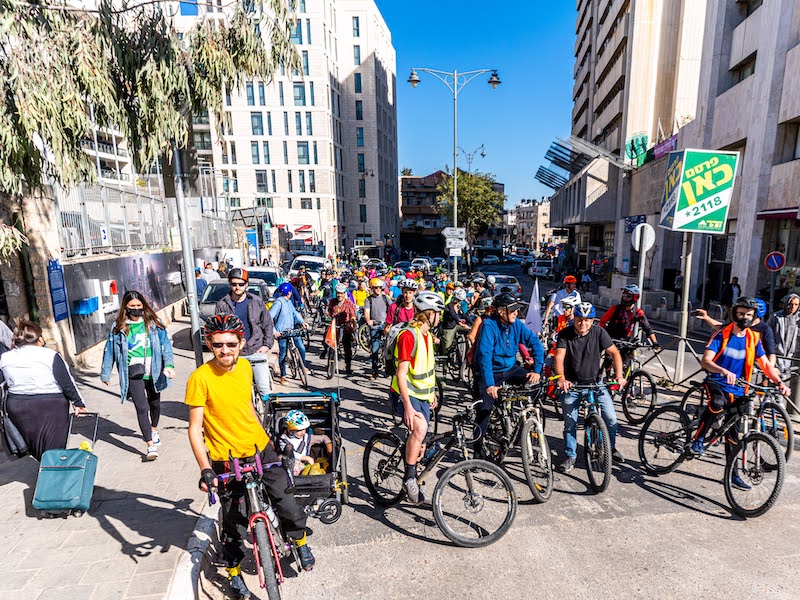 Bicycles for Jerusalem holds a group bicycle ride on January 7, 2022.

The first time he rode his bike from his home in Jerusalem’s leafy, central Rehavia neighborhood to Hebrew University atop Mount Scopus, Nadav Berger arrived sweaty, out of breath and exhausted after 40 minutes of intense pedaling.

But he rode again the next day, and the day after that, and soon he trimmed his riding time down to 25 minutes without any need to stop for water.

“That’s the thing about riding in Jerusalem,” Berger, 27, told eJewishPhilanthropy. “At the end of the day, someone who tries to ride, if they’re in pretty good shape, they will be successful. It could be that they will sweat a bit more or they will have to rest. But every rider that tries to ride, they’ll get there.”

Berger is hoping to see more cyclists on the streets of Jerusalem this fall, as cooler temperatures and the Jewish holiday season usher in one of the best times of year to ride a bike in Israel. For secular Israelis, next week also offers the opportunity for the best biking holiday of all time: Yom Kippur.

The entire country shuts down for the holiest day on the Jewish calendar. Almost no one drives, save  for emergency vehicles. That means thousands of bicycle riders can seize control of roads normally jam-packed with cars and spend the day flying down empty highways or teaching their kids to ride in the middle of city streets. Bike mechanics work long hours in the days leading up to the holiday, tuning up thousands of bicycles that have rusted under the harsh Mediterranean sun.

Generally, Israel’s capital of biking, both on Yom Kippur and otherwise, has been the Tel Aviv metro area, with its flat topography, seaside views, wide highways, large secular population and growing network of bike paths. But Berger and a collective of riders called Bicycles for Jerusalem have also been finding success promoting biking in Israel’s actual capital — not just on Yom Kippur, but all year.

Jerusalem, with its steep hills, narrow streets, and patchwork of neighborhoods straddling geopolitical and religious conflicts, has typically not been the chosen destination of bike riders. But for years, Bicycles for Jerusalem has been beating on the door of City Hall, begging for meetings with the city’s planners and trying to encourage more biking in the city.

It took a global pandemic for the group to finally get an answer. In Jerusalem, as in other cities across the globe, residents began looking for alternatives to public transit, and some turned to biking instead of taking the bus.

Over the past few years, the capital has slowly started incorporating more bicycle infrastructure and soliciting input from riders themselves. The openness to cyclists comes as the city is undergoing a massive facelift, with several large infrastructure projects, including an expansion of the light rail.

“The coronavirus pandemic focused the understanding that a healthy lifestyle must be encouraged, one that combines transportation that is greener and more accessible, while implementing good infrastructure for riding bicycles in the center of the city and throughout different neighborhoods, to connect people and allow them to move more safely and accessibly,” said a Jerusalem municipality spokesperson. “Integrating bike riding is part of the transportation policy of Jerusalem along with walkability, public transportation, rapid bus lanes, and increasing bus frequency.”

Before 2020, there were 30 miles of bike paths in Jerusalem, according to City Hall. But since then, the city has added 11 miles of paths, an increase of 34%. The Jerusalem Transportation Master Plan, a quasi-public organization that works with both the Ministry of Transport and City Hall to ensure holistic planning for  public transit and infrastructure in the city, has called for 125 miles of bike paths across the city’s 48 square miles. That still pales in comparison to Tel Aviv, which has 155 miles of bike paths in a city half the size.

One of the solutions Bicycles for Jerusalem successfully pressed the city to adopt is “tactical” bike paths, which can be integrated onto existing roads without making infrastructure changes. Creating a tactical path is generally as simple as painting new lane markings with bike symbols.

In the past, the city government would build bike paths separated from the road, which required extensive planning and construction. While such paths are considered safer, they’re also much more expensive and can take years to complete. Turning a three-lane road into a two-lane road with a painted bike lane can happen overnight.

“We went to the municipality and said, ‘Look at these cities that are doing this,’ and we really pushed it,” said Berger, the group’s spokesperson. “It took them about two years of planning, but they’ve started this year in Rehavia, the city center, and it’s going to connect to Katamon,” he said, referring to central residential neighborhoods.

“The importance of these paths is that it’s really easy to do them quickly and with minimal disruptions to the lives of the residents,” Berger added. Since Jerusalem has narrower streets, the tactical lanes are often created by removing parking, which can anger some car owners.

“We don’t think it’s the best bicycle infrastructure, but it’s really easy to do these paths as pilots,” Berger said. “You can try out the path for half a year, to see if it brings more riders, and how people react, and if it negatively impacts the residents. Then you can come to an agreement about where the best placement is for a path. It’s also really easy to go backwards and make the needed changes.”

The city is also actively promoting bike infrastructure, both for daily use and for fun. On Sept. 9, the city opened a new bicycle-only tunnel through the hills near the western neighborhood of Ein Kerem — part of a 26-mile cycling path around the outskirts of the city. The tunnel was originally built to transport wastewater in the 1990s, and was opened only once a year to bikers for a special around Jerusalem ride. After $7 million of improvements, the tunnel is now open to bikers every day of the year. At a length of 1.3 miles, it is the fifth-longest cycling tunnel in the world.

And last year, Jerusalem launched its “Jerufun” bike sharing system, with 200 bicycles at 25 locations around the city. A little more than half the bikes are electric. Berger said the “Jerufun” bike sharing program is certainly welcomed by bike activists, but the program is plagued by user issues and there aren’t quite enough stations around the city to make it as convenient as Tel Aviv’s shared scooter apps.

“We want to see more cooperation with residents from the municipality, we want them to be more assertive and sure of themselves with the car owners,” he said, noting that motorists often oppose bike lanes that may replace parking spaces. “Even with all of the advancements, in many cases, whenever there’s a conflict, the municipality will still take the side of the car owners.”

Specifically, new plans for the light rail on major thoroughfares do not include separate bike paths, something Berger calls “a huge loss.”

The problem with bike lanes, Berger said, is a chicken-and-egg conundrum. If there aren’t a lot of daily bike commuters, the city doesn’t want to invest in infrastructure for a small sector of the population. But there won’t be more bikers in Jerusalem unless they feel safe riding. And for bikers to feel safe, they need more bike lanes.

Bicycles for Jerusalem has existed for 15 years and isn’t a registered nonprofit. Rather, its volunteer activists are friends who all care deeply about their impact on the environment — and avoiding Jerusalem’s notorious traffic. Many of its members are urban planners or mapping professionals, and are now invited to weekly planning meetings at City Hall to ensure that new infrastructure takes bikers’ needs into consideration. For example, because of Jerusalem’s hilly terrain, Berger explained, the easiest bike route is not necessarily the most direct.

“Now they’re really interested in hearing from us in the planning stages, because we’ll say to the municipality, ‘Don’t make a bike path here, it won’t make a big difference for riders, it’s a waste of money,’” said Berger, who works during the day as an online news editor for an Israeli news website. “This creates belief and trust with the municipality, because they see that we’re not just yelling ‘make more bike paths, make more bike paths.’ They know we want good quality paths.”

Bicycles for Jerusalem has also grown recently, drawing as many as 100 people to its monthly Critical Mass rides — a type of event held in cities around the world to advocate for more bike infrastructure. The critical mass rides can also turn into rolling parties on wheels, sometimes with costumes, lights or sound systems pedaling along.

Jerusalem can be an intimidating place to be a biker, between the hills and windy streets, Berger said, adding that electric bicycles have convinced more people to take the plunge, but mostly, it’s about gaining confidence.

“That’s the biggest power of the organization, that there’s a monthly anchor that’s also really, really fun,” said Berger. “People don’t have to be activists when they come, they don’t have to come ready to fight and make a change. They can just come to show solidarity and have fun. And then once they start coming, they stay to work together with us.”