Camp will open — but for how many, and what will it cost? 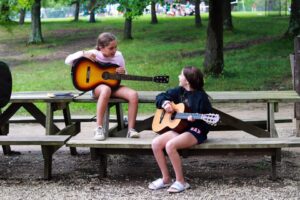 With about five months to go until summer, most Jewish overnight camps are planning to open for the season. They also, however, also cherished hopes well into the pandemic that they would be able to do the same last year.

Grand reopening: This year will be different, said Jeremy Fingerman, CEO of the Foundation for Jewish Camp, which helps non-profit camps with training and operations support. Here’s how, he explained: Though lockdowns began in mid-March of last year, many camps had only weeks to make a decision on whether or not to welcome campers that summer. Some camps, like Camp Modin in Maine, actually did open. Others opened and were forced to close. The Jewish camping community is learning from last year’s examples about what to do — and what to avoid.

Natural bubble: This year, camps can anticipate safety concerns in advance, and exploit the inherent advantages that come with running programs that largely take place outdoors. In some ways, camps are very safe places to be in a pandemic, Fingerman said. Much of camp happens outside, or in massive, airy tents. It will be easy for camps to imitate the NBA, turning themselves into a kind of isolation zone that protects everyone inside from the virus. “There’s good confidence that camp will happen,” Fingerman said. “We don’t know at what cost.”

Headcount: The camps have less clarity on their numbers now than they usually do at this point in the year. While the regulations governing camps will vary state-by-state, Fingerman and his colleagues anticipate mandated “capacity reductions” — similar to those at restaurants and gyms. The pandemic economy has also made it harder for many families to afford camp, which can cost up to $10,000 for a full summer — a luxury for many even in a normal year. As a result, camps might have far fewer kids than usual.

Pent-Up Demand: On the other hand, Fingerman noted, the demand may increase. Children who didn’t get to attend camp last summer will be all the more eager to go this time. The added allure of a summer spent in nature may also be attractive to families whose children have never been to camp but who have been stuck indoors for over a year. “If there ever was a time for camp, it’s now. Kids need it. Parents need it,” Fingerman said. Adding to the number of domestic campers are the American kids who usually go to Canadian camps, but who will stay in the U.S. if Canada continues its closed-border policy.

Structural changes: Camps will have to adjust to fit the current environment. Capacity restrictions will necessitate more bunks and replacements for other crowded indoor spaces, like art centers. On top of that, the camps will need quarantine units in case of infection. Creating that extra space will also help solve one of last summer’s major concerns: the possibility that camp outbreaks could overwhelm small, rural hospital systems.

The bigger tent: Teams of health experts, architects and contractors are already exploring individual camps and poring over maps, figuring out how to make space for lots of extra beds, Fingerman said. FJC is trying to amplify those efforts by asking the camps to share their ideas — the deadline is Friday. The umbrella group will then offer funds to help implement and share the most useful suggestions at camps around the country. To support its efforts, FJC received funding from the Jewish Community Response and Impact Fund, the $91 million pool of grants and loans created by foundations and federations in response to the pandemic. Early possibilities include renting property from neighbors, tent villages for older campers and yurts. “A yurt is not all that expensive,” Fingerman said.

Lots of PPE: Most camp construction is no-frills and relatively cheap. In addition, FJC, along with the Jewish Federations of North America, will try to help camps coordinate discounts for bulk orders of supplies, including tents, masks and other personal protective equipment. If camps can actually grow their capacity, Fingerman explained, they can grow their profit margin on each camper, and start the process of healing financially. “In normal times, camps are a good business,” Fingerman added. “But they reinvest in themselves.”