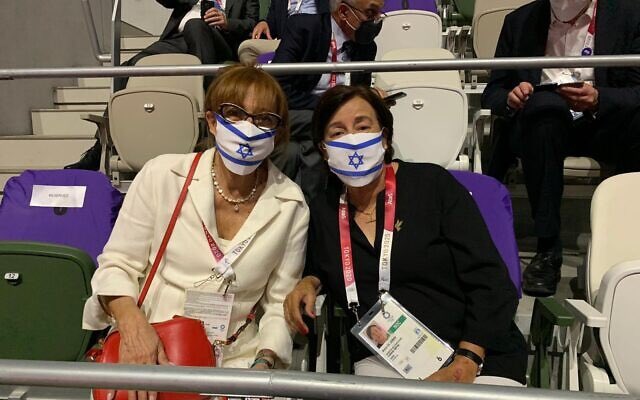 When the 11 members of the Israeli Olympic team who were killed by Palestinian gunmen during the 1972 Munich Olympics were remembered on Friday during the opening ceremony  of the Tokyo Games, David Kirschtel cried — but he was also not surprised. The CEO of the Jewish Community Center of Rockland County, Kirschtel had helped make the moment happen, he told eJewishPhilanthropy, in a conversation about the 49-year struggle to honor the slain athletes.

??From Maccabi Games to Olympic Games: Now, I’ve been the CEO at JCC Rockland for about 21 years. Being a huge sports guy, I started a basketball team. JCC Rockland was always a strong JCC Maccabi Games community, even though we were a small JCC. We didn’t even have a real building until the late 1980s. But we had a strong delegation. We always used to send 50, 60-plus kids. We never hosted, but we would travel around the country competing — what a great program. And Munich really became seared in my mind when my son competed, because in every Maccabi opening ceremony, Munich is remembered. I always felt great that the kids were going to play sports. They were going to hang out with friends — maybe to meet friends of the opposite sex — but they would also be present at that opening ceremony. Lenny Silberman [the founder of Lost Tribe Esports] had established that practice. And the JCC Association should get a ton of credit. Lenny Silberman set the framework. That’s the power of the movement.

The widows’ struggle: Now we get to 2010, which was when I decided that little old Rockland should host the games. 2012 was going to be the 40th anniversary of the deaths in Munich, and also the 25th anniversary of the Maccabi Games, so I also came up with the idea to dedicate the games to the memory of the Munich 11, and to do 11 events in the lead-up to the games. We collected 11 million pennies and that money went to feed the hungry in Rockland and in Israel. I didn’t know any of the widows, but I wrote up a proposal and got it to Ankie Spitzer, Andre Spitzer’s widow. [Spitzer was an accomplished fencer and coach of the Israeli Olympic team.] She didn’t understand what these people in New York were doing, but we had a Skype conversation. That’s when I learned that Ankie and Ilana Romano, the widow of Yossef Romano, the weightlifter, had been waiting for a moment of silence for the Munich 11 since 1976. In 1976, they went to Montreal, assuming their loved ones would be remembered. They paid their own way. From 1976 until 2010 the two women had fought the IOC [International Olympic Committee] every four years. They never got their moment of silence.

Turning point in 2012: So we hosted the games in Rockland and we had started to help their campaign. We had no idea what we’re doing. Nothing. We started doing a handwritten petition. Talk about stupid. A board leader of mine said that we should do an online petition. They’re a dime a dozen now, but they weren’t so big back then. We figured we’re going to get a thousand signatures, and in a matter of 60 days we get 110,000 signatures, and comments from around 150 countries. Because it was the 40th anniversary, people started getting involved. The JCC Association. JFNA. The New York Board of Rabbis. Catholic University. Hadassah. Governments were holding minutes of silence to remember the athletes. Australia, Italy, Germany. In the presidential campaign here, Obama said something. Mitt Romney said something. This was all related to our petition, so I made a strategic decision. We took the petition to London and presented it to the IOC. Ankie and Ilana flew in. We held a press conference, and the BBC was there, and Reuters was there, and CNN was there. Big press. No clue what we were doing, but I guess we had some clue. It wasn’t as good as a minute of silence, but it was important. The world didn’t remember what happened in Munich. I’m not blaming anyone. You know what happens in the world. Overload. But what we did brought it back.

Change in leadership: That morning, Jacques Rogge, the head of the IOC, held a moment of silence for the Israelis in the Olympic village. He was running scared. But when we met with him in his office, he leaned across the desk and he told Ankie, “I’m not going to do it.” And that was the end of things in 2012. But in 2016 there was a new head of the IOC, Thomas Bach, who is the current head. He’s a German fencer. Ankie’s husband was a fencer and Ankie was a fencer. That’s how they fell in love. Ankie and Ilana [went] to Switzerland to meet with Thomas Bach, and he said, “I don’t want what happened in 2012 to happen again.” And Ankie said, “Well, Thomas, there’s one way to make sure that it doesn’t happen, and that’s to give us a moment of silence.” They came up with a memorial in front of all the athletes in the Olympic village, and the idea was that it would happen every four years. This wasn’t what Ankie and Ilana wanted, but they’re pleased. Bach also flew them in and put them up that year. Now all of a sudden you have a guy who pays for them to come and gives them something meaningful.

After 49 years, the moment arrives: So they don’t give him a hard time in 2016, but they’re still determined. Ankie had said that when we die, our children and our children’s children will carry on this fight. When the Olympics got closer in 2021, none of us knew what was going to happen. Bach didn’t tell Ankie and Ilana anything. But then he reached out and flew them to Tokyo. I knew that it was going to happen. He could’ve used COVID as an excuse, but he didn’t. He looked like a good guy, when the last guy looked like a schmuck. On the day of the opening ceremony, I was watching in my office at 7 a.m. First, they said they remembered everyone who had died of COVID. Then they said they remembered all the Olympians who had died. Finally, they said they remembered the Israelis who died at Munich. I was sitting in my office with tears in my eyes. Ankie said she cried for over an hour, and she’s not a crier.

Lessons learned: I’m happy for our community, for making a difference on an issue of world importance. If you believe in something, you have to fight for it. Every time someone in the community says something is impossible, I say that Ankie and Ilana worked for 49 years and didn’t give up, and we’ll get this done. There’s nothing that can’t get done.