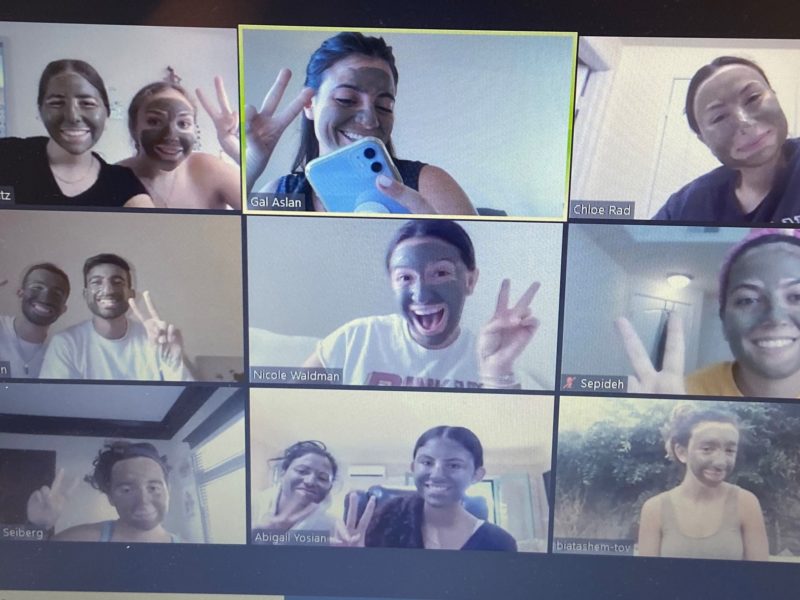 Many Jewish college students are at home — with their family, but isolated from friends. Others are on campus, still taking classes virtually, and instructed to socialize with only a small group of peers. In both situations, they’re struggling, said Adam Lehman, Hillel International’s CEO.

“Even if there are elements of being back at school, that has in some ways made the experience even more frustrating,” said Lehman, who has two daughters in college.

Leah Moz, Hillel’s director of wellness, was given that title about three years when the movement started thinking more consciously about how it could contribute to students’ mental health, she said. Hillel realized that it was positioned to help, because the relationships and reflection that are central to its work as a hub for Jewish student life can protect against such distress. The need on the part of the students was obvious, she said, citing the Healthy Minds Study, which, before the pandemic, found that 68% of students experience acute anxiety.

In 2019, Hillel International was already experimenting with “Kognito,” a software program that helps people who aren’t mental health professionals identify warning signs, Moz said. This kind of training could be misunderstood or improperly applied, but it’s outweighed by the risk of overlooking a student in distress, said Ryan Patel, a doctor of osteopathic medicine and a psychiatrist at The Ohio State University who is the chair-elect of the mental health section of the American College Health Association.

The same year, the University of Southern California’s Hillel launched the Bradley Sonnenberg Wellness Initiative, named after a student who died at age 21 after struggling with anxiety and depression, said Dave Cohn, USC Hillel’s executive director. Before the pandemic shut down the school, the initiative offered programming like meditation and yoga as well as free counseling — available to anyone. It was the first Hillel to employ a full-time social worker.

“This is the first generation that has spent their entire adolescence on their smartphones, and using the internet,” said Patel. “We are starting to learn about how this impacts the brain.”

At USC, Cohn saw so many students in distress that they sometimes had to wait months to get an appointment with a counselor.

“Students were left without anywhere to turn in some cases,” he said.

And then, the pandemic hit. It was an unprecedented disruption to Hillel’s work in a way that jeopardized that safety net of relationships the organization had tried to build for students, Moz said. By April, the national organization had realized that their goal was to maintain those connections with students even in the absence of in-person interaction.

“We checked in with every student that we’ve ever had a connection with,” Moz said. “I think when permission was given to do that, it was a turning point.”

Partly in order to facilitate that effort, Hillel’s leadership made it a priority to retain as many of its staff that worked directly with students as possible, Lehman said. It obtained $20 million in emergency funding from several sources, including the federal government’s Paycheck Protection Program. It also restructured some of the multi-year grants already in place in order to use the funding earlier than planned.

Because the staff serving the campus Hillels — about 1,200 people — was still working, Moz and her colleagues could discern student needs by listening to the employees who were in touch with them by phone and online. They started offering training in grief counseling to Hillel staff, like educators and assistants, who had never needed to know how to talk with students about loss. And the individual chapters are persisting in their work of staying connected with students. At USC, Hillel staff ship supplies for a program — like “spa night” — to students around the country. The students then gather online, or even in-person, for socially distanced events.

The national movement also started accelerating the effort to hire social workers at the local chapters, which had started at USC, Moz said. Seven chapters now have social workers on staff who are affiliated with nearby Jewish Family and Children’s Services agencies. Hillel also has a grant that it’s using to try to replicate those partnerships, and bring on social work graduate students as interns. Some 600 employees — half of the total — have been trained on Kognito since the summer. Chapter staffers have been trained on how to post their mental health offerings, like phone numbers and online programs, on Instagram.

Before the pandemic, Moz said, part of her job was making the case for Hillel’s new attention to mental health. Now, she doesn’t have to do that anymore.

“The staff is seeing the need every day,” Moz said. “The pandemic has brought it to the forefront and enabled us to truly integrate into the movement.”