It's the first permanent Israeli presence for the New York City-based egalitarian yeshiva. 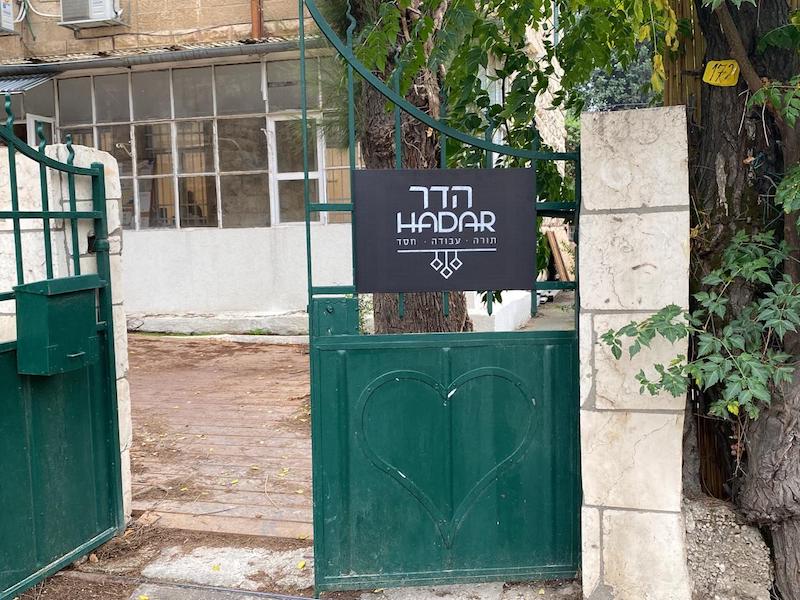 The entrance to Hadar's new space in Jerusalem.

This week, a black and white sign went up at 63 Emek Refaim Street in Jerusalem’s German Colony, emblazoned with the word “Hadar” in Hebrew and English, giving a permanent Israeli footprint to an egalitarian yeshiva that had spent years bouncing between different temporary spaces.

The Emek Refaim space is an upgrade for Hadar. It has two small office areas, some outdoor green space, a kitchen area and a large room where students can gather and learn.

Hadar Israel’s president, Rabbi Avital Hochstein, told eJewishPhilanthropy that her organization aims to provide high-level learning that “gives tools rather than just hands over ideas.” Its goal, she said, is to enable people to look at Judaism independently. Hochstein, who also has a doctorate in Talmud, added that the community the institute is creating is dedicated to rigorous Jewish learning, as well as full egalitarianism and observance of halacha, or Jewish law.

Hadar Israel is a branch of the Hadar Institute in New York City, an egalitarian yeshiva and Jewish educational center that was founded in 2006. The institute itself stemmed in part from Kehilat Hadar, a traditional egalitarian congregation in Manhattan that is more than two decades old and that has no formal affiliation with the institute.

Rabbi Elie Kaunfer, who co-founded both Kehilat Hadar and the Hadar Institute, told eJP that UJA-Federation of New York funds the Hadar Institute’s work with more than 50 grassroots religious communities in Israel to the tune of $100,000 annually, and the Honey Foundation contributes $40,000 a year to the same effort. The Aviv Foundation provides $350,000 per year to support Hadar’s general operating expenses, $75,000 of which supports general operations for Hadar in Israel. Hadar’s work in Israel is also supported by more than 300 individual donors in Israel, Kaunfer told eJP. Hadar Israel’s current annual budget is approximately $930,000, within a total Hadar annual budget of $10.5 million.

One of Hadar Israel’s signature programs is an immersive learning session during the Hebrew month of Elul, which precedes the High Holidays. In addition, throughout the year, it hosts programs in which students can learn for 10 hours a week or participate in a variety of offerings, from singing in a choir to studying the weekly Torah portion or the Mishna. The institute hosts specialty programs, like a weekly learning session geared toward parents who are on parental leave with their babies. In addition, it hosts an annual conference for leaders of communities in Israel, as well as a retreat for those leaders. And it hosts a three-day winter seminar dedicated to a topical issue, such as how to observe Shabbat in an increasingly digital world. Another such seminar, held while refugee policy was a hot-button issue in Israel, explored Judaism’s relationship with the stranger.

“We’re considering, this year, tackling the issue of the land [of Israel] and Jewish relationships,” Hochstein said. “We try to take current issues, learn it very traditionally, but also [make it] very relevant.”

Hochstein said that getting a permanent space was important because now the yeshiva can create a setting that’s “completely according to our character.” Previous spaces hadn’t provided enough learning area for the beit midrash, Hebrew for house of study, and some didn’t have books available for students to peruse.

“We believe in books in the beit midrash,” she said. “We want people to go up and open [them] and follow their curiosity.” The new space also has a Torah scroll and an ark that students can use for prayer services.

“All these little pieces make up who we are,” she said. “We try to make a pleasant place not only for the people learning and praying, but also to give the facilities the character we believe in, [which] reflects our values.”

Another benefit to having a designated space is to provide alumni with a place to gather and collaborate: Alumni have created, for example, Hadar-inspired learning environments and prayer communities in the north of Israel, Tel Aviv and the southern city of Beersheva; a queer beit midrash; and an initiative to save food from the shuk, or open-air market, in the central city of Lod.

One major, if perhaps obvious, way that Hadar Israel differentiates itself from its American counterpart is that its programs are all conducted in Hebrew and cater to Israelis. Its website is also completely in Hebrew, with no English option.

“We are primarily serving people who come from the religious world,” Hochstein added. “Everyone is welcome to come into our beit midrash, and everyone does, but the core is made up of people who are slightly different” than students in the American Hadar, who come from a variety of Jewish backgrounds.

“We’re about integration, you come as a whole person with your set of beliefs, and we don’t believe that that is a contradiction to a halachic way of life,” she said. She added that the community Hadar Israel seeks to create is centered on interdependence.  “You can’t pray without a minyan,” or 10-person prayer quorum, she said. “So you’re dependent on each other, you’re building something jointly.”

Another difference is in the way Israel itself is discussed. While the country can be a fraught topic of conversation in American Jewish circles, in Israel, she said, the political debates on a range of issues play out differently, because “we criticize from within and not from without.”

She added that Hadar’s goal is to be a space where everyone is welcome along with their diverse opinions, especially following the recent elections in Israel, which saw Benjamin Netanyahu and his allies win a majority.

“We are part of an institution that very much believes we need to do work both here and there,” she said, referring to Israel and the United States, “but since we’re serving Israelis here, everyone’s been to the army. The questions are different.”