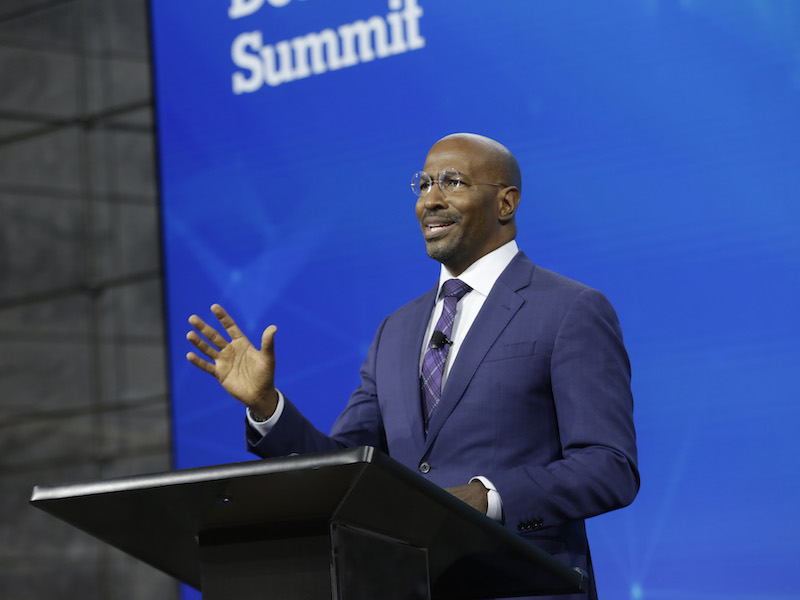 On Monday, Dec. 5, CNN host Van Jones delivered the keynote address at the UJA-Federation of New York Wall Street Dinner in New York City. Below is a recording of the speech followed by its full text.

I am going to start off with an apology.

I’m going to start off with an apology for the silence of my community and for the speech of my profession.

And yet, as this wave of hatred has been building against your community, we have rationalized over and over and over again, responding not with a roar, but often with barely a squeak, and sometimes a shrug. As a result, we now have the shock to you, the pain to you, and the humiliation to us of having an African-American icon praising Hitler and Nazis. And we act like we don’t know where the hatred came from.

You have awoken in this community a determination to stand up for what’s right. And I apologize it’s been this long in coming. You’re going to see a change going forward. You’re seeing it already — the fight back now happening in the Black community against anti-Jewish bigotry, the pride that people have in standing up against this anti-Jewish bigotry in our community. But I owe you an apology before I say anything else.

I also owe you an apology for the speech of my profession. The media, of which I’m a part and a proud part, has done all of us a disservice. Because we have managed, I think, to convince you of something that’s not true.

I think we’ve managed to convince the country of something about itself that’s just not true. If you watch cable news, if you watch the mainstream media — right, left or otherwise, you will come away with a perception that there are so many awful people in this country that nothing good can be done.

We don’t want to waste money or time, we don’t want to give offense, but the vast majority of people are awesome. You don’t have an awful people problem, you have an awesome people problem. And if you understand that, there’s hope. We depress you by not standing with you and we make you feel more dispirited than you should by just showing you the negative.

Yeah, there’s conflict because there’s contact. We know each other. We know each other. But that contact doesn’t just produce friction, it also produces light. And the light that has come from us standing together is why you have the America that you have. We have to tell people that. We can’t expect for the next generation of Black and Jewish kids to guess that or to know that but I’m lucky because my godmother is Dottie Zellner. I’m her godson.

And Dottie Zellner was one of those crazy Jewish kids in 1964 who had heard about what happened with the Holocaust and said she was not going to let racism and violence win. Crazy Jewish kid. And she was a member of the Student Nonviolent Coordinating Committee: Black and white kids who decided they were going to risk their lives and go down south and break the back of Jim Crow.

And my godmother was the one that they picked to do the picking. They trusted her so much. They thought she had so much just good common sense that she got to decide which Black kids and which white kids could go and which ones were going to be too nutty and needed to stay back on the campus. That was my godmother, she’s still got good sense. And she buried her friends — two Jewish kids and a Black kid who got murdered that summer so we could have a real democracy. We had 300 years of slavery, a hundred years of Jim Crow terror and a bunch of crazy Black and Jewish kids went down in one summer and broke the back of Jim Crow. The light that we don’t talk about.

I want to say to the young people who are here: [Gestures to young person near the front] (unintelligible) I know your daddy. I love Dan Loeb. That’s my homeboy. That’s my soul brother.