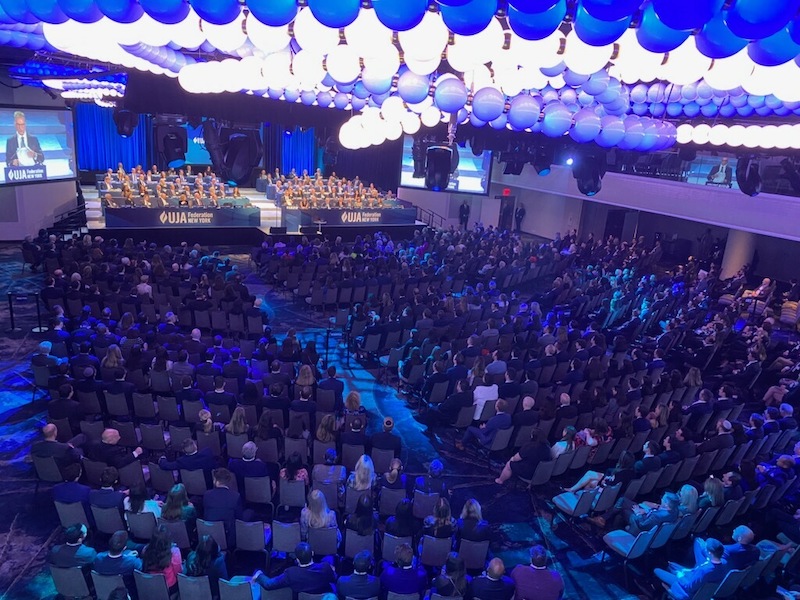 The crowd at the UJA-Federation Wall Street Dinner on Dec. 5, 2022.

The aspect of the UJA-Federation of New York Wall Street Dinner that may have stood out the most was a number: $31 million, the amount raised that night — a haul that exceeds the annual budgets of many Jewish organizations.

But last night, the tone of the awardees’ speeches belied the event’s astronomical numbers, its dark designer suits and cocktail dresses, and the kosher catered food on offer. The awardees were unquestionably denizens of Manhattan’s financial district, but their remarks were less about their success in business than about the personal journeys they have gone through.

“Jewish outreach really matters, and you never know when it’s going to click,” said one of the night’s honorees, Daniel Loeb, CEO of Third Point, a hedge fund that manages an estimated $14 billion, describing his growing interest in Judaism. “The most important thing to do is to be our own emissaries.”

Overall, the night brought together 1,400 people — double last year’s attendance but lower than that of 2019 — to hear about UJA-Federation’s themes of aiding Ukraine, addressing the legacy of COVID-19, ameliorating food insecurity and fighting antisemitism. Eric Goldstein, the group’s CEO, said that in recent years, UJA’s total annual grantmaking has risen from $155 million to $175 million and is likely to grow.

He discussed how the cost of food has risen 12% with inflation — 16% for kosher food — and said that demand at New York-area food pantries is nearly 70% higher than it was before the pandemic. He lamented that people are paying less attention to the war in Ukraine, even though the fighting and the corresponding humanitarian crisis are ongoing.

People “have become largely numbed to the headlines,” Goldstein said in his speech regarding Ukraine. “The daily savagery has become almost normalized, and the incredible wave of philanthropic giving that we and many others saw at the beginning of the war to support Ukrainians has reduced to a trickle.”

But the focus of the event was clear. Last year’s dinner, held like this one at the Marriott Marquis near Times Square, highlighted antisemitism but focused on the ongoing pandemic and the world’s tenuous emergence from COVID restrictions. Last night, nearly all the speakers talked about antisemitism.

CNN host Van Jones, the keynote speaker, opened his speech with “an apology for the silence of my community” regarding discrimination against Jews. Jones, who is Black, invoked his Jewish godmother in calling for a renewal of the Black-Jewish civil rights alliance, and condemned Kanye West, now known as Ye, for his stream of antisemitic remarks. To loud applause, he repeated, “Ye, nay! Ye, nay! Ye, nay! No more, no more, no more.”

Solita Marcelli, the chief investment officer for the Americas at UBS, won the Alan C. Greenberg Young Leadership Award and spoke about her experience as a Turkish Jewish immigrant to the U.S. When she attended her first UJA Wall Street Dinner two decades ago, she said, “That evening seemed a little different than it does tonight. I don’t remember anyone who looked or sounded like me — a woman, an immigrant, with an accent.”

She also recounted how her childhood synagogue in Istanbul was repeatedly attacked, prompting the community to put heavy security measures in place. “I never expected to see this in America, but now not a week seems to go by without a threat to a synagogue or some celebrity or politician spreading baseless antisemitic tropes and conspiracy theories,” she said.

Loeb won the Gustave L. Levy Award. Last night, he pledged $3 million over two years to UJA. He has a net worth of approximately $3.5 billion, and has donated to organizations ranging from Success Academy, a network of charter schools, to the Aleph Institute, which works on criminal justice reform. In his speech, he said, “Jewishly speaking, I was raised by wolves,” and narrated his experience of becoming more involved with the Jewish community.

When the pandemic began, he said, a rabbi who was an early COVID patient asked Loeb to recite the Shema on his behalf — but Loeb didn’t know how to say it. That request led Loeb to begin praying regularly and putting on tefillin — something he credited for a turnaround at his fund. Now, he said, he sends siddurim to his friends. Near the end of his speech, he quoted a line about committing to love one’s neighbor as oneself.

“Say this every day,” he said. “Be kind to each other. Don’t forget to be kind to yourself. And be kind to the UJA.”